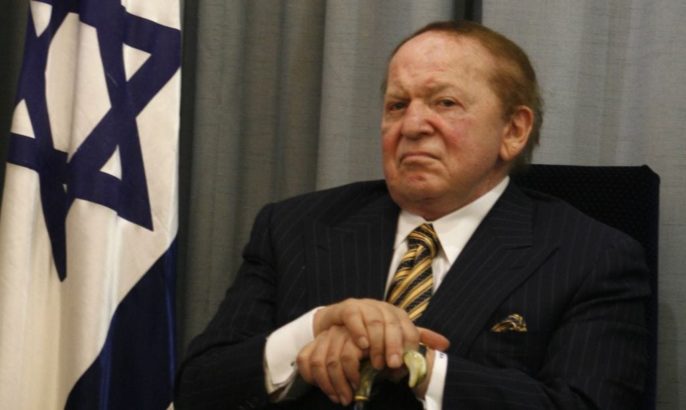 Sheldon Adelson – who says his issue is Israel –  donated $30 million to a top Republican PAC. This may be the single largest campaign donation in U.S. history.

Adelson influenced Trump to move the U.S. embassy to Jerusalem and end the Iran nuclear agreements.

Adelson-supported appointees include Nikki Haley, Mike Pompeo, & John Bolton, a close Adelson confidante. He was instrumental in removing Rex Tillerson and H.R. McMaster, due to their support for the Iran agreement

With the 2018 Congressional midterm elections approaching, Republicans – eager to keep their control of both houses of Congress – have been seeking lucrative donations that would give Republican candidates an advantage in the lead-up to November.

On Thursday, those efforts paid off in a big way as the top Republican congressional political action committee (PAC), the Congressional Leadership Fund, secured a massive $30 million donation from Las Vegas casino mogul Sheldon Adelson. Adelson’s massive donation will account for just over 41 percent of all donations made to the group since January 2017. 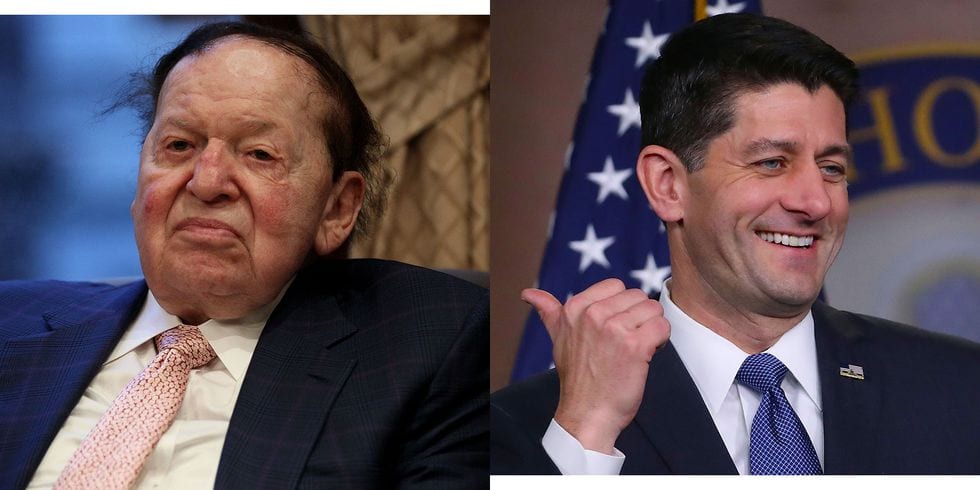 According to Politico, the deal was brokered in part by Rep. Paul Ryan (R-WI) even though, as a federally elected official, he is not permitted to solicit such eight-figure donations from private donors. In order to get around this inconvenience, Ryan briefly left the room while Norm Coleman of the Republican Jewish Coalition, who was also present at the meeting, asked Adelson for the funds during Ryan’s conveniently timed absence, and thus secured the multi-million dollar contribution.

After investing so heavily in the GOP in 2016, Adelson’s decision to again donate tens of millions of dollars to Republican efforts to stay in power is a direct consequence of how successfully Adelson has been able to influence U.S. policy since Trump and the GOP rode to victory in the last election cycle.

In his media appearances and past interviews with journalists, Adelson has always made it clear that he is a “one-issue voter” and that his central concern is always Israel. Adelson’s belief that Trump would be “good for Israel” was the main driver behind his decision to spend more than $90 million on helping Trump and other Republicans win in the last election.

While Trump’s campaign promises – particularly those populist and anti-war in nature – have rung hollow, the President has notably fulfilled his campaign promises that were of prime importance to Adelson. Those promises were the moving the U.S. embassy in Israel from Tel Aviv to Jerusalem, which Adelson has aggressively promoted and is even helping to finance, and removing the U.S. from the Joint Comprehensive Plan of Action (JCPOA), better known as the Iran nuclear deal.

Adelson has also been successful in installing Iran war-hawks and pro-Israel stalwarts in the top government positions. Adelson-supported appointees include Nikki Haley, long-time recipient of Adelson campaign funds who now serves as U.S. ambassador to the UN; Mike Pompeo, former CIA director who has advocated for bombing Iran and now serves as secretary of state; and John Bolton, a close confidante of Adelson’s who is now National Security Adviser. Adelson was also instrumental in removing Pompeo and Bolton’s predecessors, Rex Tillerson and H.R. McMaster, from their respective posts, due to their support for JCPOA. If anything, Trump’s presidency has shown that, while Trump has left the promises he made to his base largely unfulfilled, he gladly keeps the promises made to his biggest donor. Adelson’s new donation to the Congressional Leadership Fund shows that he has been extremely pleased with the performance of Trump and the Republican Party.

Though Adelson has successfully used his donations to obtain policy decisions he has long desired, his work is still not done. Adelson, like many of the government officials he has put into power, is an advocate of a U.S./Israel war with Iran. With the U.S. out of JCPOA and now set to promote regime change as part of its official Iran policy, the foundation is quickly being laid for a military confrontation with Iran. Israel, whose leadership is also funded by Adelson, is also busy preparing for a major conflict with Iran.

Adelson’s perspectives on U.S. foreign policy, particularly towards Iran, are alarming, given that his influence on U.S. politics is set to grow in the wake of his latest donation to the Republican party. For instance, in 2015, Adelson advocated for a U.S. nuclear attack on Iran without provocation, so the U.S. could “impose its demands [on Iran] from a position of strength” during the negotiations that eventually led to the JCPOA.

Per Adelson’s plan, the U.S. would drop a nuclear bomb in the middle of the Iranian desert and then threaten that “the next one is in the middle of Tehran” to show that “we mean business.” Tehran, Iran’s capital, is home to nearly 9 million people, with 15 million more in its suburbs. Were Tehran to be attacked with nuclear weapons, an estimated 7 million would die within seconds. Any sort of diplomatic engagement with Iran, according to Adelson, is “the worst negotiating tactic I could ever imagine.”

Adelson has also given millions of dollars to the Foundation for Defense of Democracies, a pro-war think tank whose “experts” on Iran have pushed for pre-emptive military strikes targeting the country as well as blockades on food and medicine to Iranian civilians. He also has contributed nearly one-third of all donations to the anti-Iran group, United Against Nuclear Iran.

With a $30 million dollar infusion during a difficult and critical midterm election, the Republican party – with Trump still at the helm – will likely show its gratitude towards its most generous benefactor by continuing to heed his beck and call, including driving the U.S. to support a major military confrontation with Iran.