You Are Here: Home → Not a person, but a “knife-wielding Palestinian” 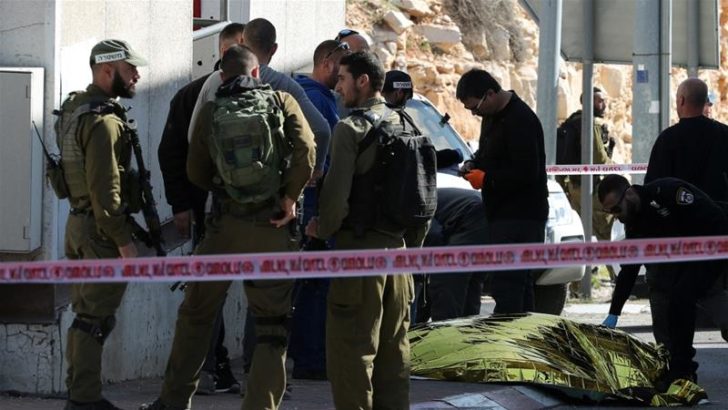 This 16-year-old child did not grow up or die in a vacuum. We need to examine the reportage, the context of her life, and own our own complicity in her death.

The story of Samah Zuheir Mubarak, close up

Samah was a 16-year-old high school student. On Wednesday she packed her bookbag and headed out the door, but before she reached school, she was dead.

She was shot at close range at an Israeli checkpoint in the occupied West Bank of Palestine.

Israeli police, being the only entity with security cameras at checkpoints, are the authorized storytellers in the region. They have provided a video – edited, without audio, and taped from too far away to be conclusive.

Nevertheless, theirs is the official explanation of the incident: Samah came, she attempted to stab, she was shot dead by an officer in self-defense.

Those few seconds shown in the video may be actual footage, but they are far from the complete story and do not justify the murder of a child. Are we to believe that Israeli soldiers could not disarm a 16-year-old girl without killing her?

What happened between the moment Samah walked next to the white car and the moment her body hit the ground? Did a leering officer order her to remove her niqab (face veil), and she refused? Did someone touch her, curse at her? Had she previously been sexually harassed, perhaps had her money stolen as sometimes happens to young Palestinian women at checkpoints?

The video also shows an officer handcuffing Samah as she lies on the ground. Israeli officers denied her medical aid.

Samah’s story, from those closest to her and those nearby

Samah’s family is incredulous. Her uncle commented, “Samah has a childish personality, she has no extremist thought or ideology, she comes from a religious family, we are all religious, and she would not do what Israel claims.”

Eyewitnesses to the murder assert that she was indeed ordered to remove her niqab, according to founder of International Middle East Media Center (IMEMC) editor Saed Bannoura.

This is a game-changer. Why is it not being reported widely?

In the US – where police are members of the community – there is pushback whenever an unarmed person is gunned down. But the situation in the West Bank is worse. This killing took place under occupation, at the hands of an adversary and occupier with a near-monopoly over news spin – and a very itchy trigger finger. Israeli police are famous for their excessive use of force.

Israel is also known for whitewashing its soldiers’ crimes.

Israeli officials claim that in many cases, Palestinians with mental health issues commit “suicide by cop,” and that attacks by Palestinians – especially women – are often precipitated by personal and domestic issues, not ideology.

These theories, usually unaccompanied by evidence, ignore the possibility that the death might be the fault of the shooter, or that Palestinians might have some legitimate rage toward Israel and its enforcers.

Samah’s story, from the media

We in the West expect at least an attempt at neutrality from major news outlets – one quote from an eyewitness, a shadow of doubt cast over the police version of the incident (although if we are being honest, we must concede that mainstream media has for decades slanted the news in Israel’s favor).

Yet the headline from Reuters framed the incident as terrorism:

“Knife-wielding” people are dangerous – the casual consumer will carry this assumption into his/her reading. When only Israeli sources are referenced in the story, it makes sense – spokespeople for terrorists don’t deserve a microphone.

Samah’s story is reduced to “units responded” to the “female suspect,” who was “neutralized” in seconds.

The Israeli police, a few feet away from the female suspect, decked out in bulletproof vests and carrying machine guns, shot – point blank, fatally – a girl who was supposedly wielding a small kitchen knife.

None of this is noted in the Reuters story, and therefore, the ordinary reader would likely not question the shoot-to-kill decision. Obviously, whenever another knife-wielding Palestinian terrorist is eradicated, the world is a safer place – and maybe those Palestinians will finally learn to behave themselves.

Reuters attempts to add “context” farther down in its article:

There have been sporadic Palestinian street attacks on Israelis since U.S-brokered peace talks broke down in 2014.

Most readers would internalize this claim too, without a second thought, because Reuters is silent on the actual statistics of Palestinian vs. Israeli deaths. Instead, we are “informed” that Palestinians simply attack Israelis frequently and without provocation.

Reuters’ statement is a microcosm of the Palestinian struggle to be known and understood.

The backstory to the Palestine/Israel conflict is one of Israel’s best-kept secrets: the violent colonialist history, during which the Jewish population took over Palestinian property and sent 750,000 Palestinians into exile; the Palestinians resistance as they struggled to keep their land and self-determination. (Read about this history here or here, or in this book.)

The context of the current situation is little publicized: the occupation, ongoing for 50 years, has been crushing and relentless, with daily humiliations, injustices, and apathy.

Add to that the almost-daily attacks on Palestinians and their property by radical Israeli settlers – unchecked and even assisted by Israeli police and military. That’s not a typo: Israelis, with help from their military, regularly attack Palestinians. Look at a map, and know that Palestinians are in a fight for their very survival.

Samah carried this perspective with her every day.

Samah’s story is our story to grapple with

If she did indeed try to stab an Israeli police officer, her life was wrongly taken and her story adds to the ongoing chronicle of the Palestinian struggle. The final, and in her mind perhaps the most meaningful act of her existence, was to empower herself do go down fighting.

If she was killed for no reason, her death simply adds to the saga of Palestinian suffering.

Maybe, instead of feeling indifference or scorn toward her, we should grieve: a young woman, we would say “with her whole life ahead of her,” was either so desperate and hopeless that she took her own life, or was murdered for no reason.

Either way Samah is one in a long list of tragedies arising from illegal occupation – an occupation that Israel and the US have perpetuated unnecessarily, at great human cost to both Palestinians and Israelis, and at great financial and ethical cost to the US.

But it won’t. It will increase surveillance and security, treat Palestinians with even more contempt – and lock down the occupation further than ever.

It won’t work. Nothing will – except justice.