You Are Here: Home → Shutting Down Free Speech in America: Government and Lobbyists Work Together to Destroy the First Amendment 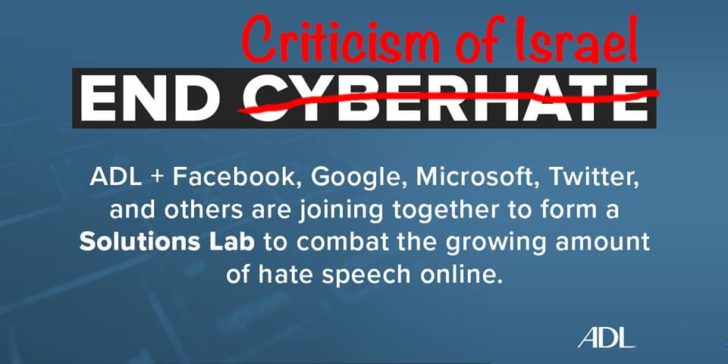 The ADL (“Anti-Defamation League”) claims to oppose “hate,” but in reality it often works to censor factual information about Israeli oppression of Palestinians. The ADL rarely informs the public that one of its two official missions (perhaps the main one) is to advocate for Israel.

The ADL, with its $64 million operating budget, is in the forefront of limiting free speech, thus limiting information available to Americans and narrowing governmental policy options… Some organizations critical of US and Israeli policies have seen their gmail and Facebook pages shut down…

During the past several years, there has been increased pressure coming from some in the federal government aided and abetted powerful advocacy groups in the private sector to police social and alternative media. It is a multi-pronged attack on the First Amendment which has already limited the types of information that Americans have access to, thereby narrowing policy options to suit those in power

The process has been ostensibly driven by concerns over alleged Russian interference in the 2016 election, but it is really about who controls and limits the public’s right to know what is going on out of sight in Washington and New York City, where politics and money come together. If one is interested in the free flow of information and viewpoints that comes with the alternative media, it certainly does not look that way. Robert Parry described it as a deliberate process of “demonizing and silencing dissent that questions mainstream narratives.”

Last October top executives from Facebook, Google and Twitter were summoned to Capitol Hill for a discussion of their role in what is alleged to be Russia’s influence on the presidential campaign and went back home contrite and promising to improve. They have indeed improved by punishing members whose views have been found to be unacceptable, blocking them and suspending their access to the sites. Meanwhile, the federal government for its part has attempted to silence independent non-U.S. based voices by declaring Russian media outlets RT America and Sputnik to be “foreign agents,” requiring them to register under the Foreign Agents Registration Act of 1938 (FARA). It is an unprecedented action against a news agency and invites quid-pro-quo for U.S. media operating overseas, leaving the American public more ignorant of world affairs than it already is.

Qatar based Al-Jazeera, which has been particularly targeted by Jonathan Greenblatt of the Anti-Defamation League (ADL) as “a major exporter of hate against the Jewish people,” will also be required to register with FARA to comply with the new National Defense Authorization Act. Al-Jazeera, it should be noted, has employed undercover investigative journalism to expose the corruption of Britain’s government by Israeli supported Jewish groups. It’s similar series on the activity of Zionist lobbyists in America is on hold due to threats from Jewish organizations to severely punish the network if the documentary should ever be aired.

American Herald Tribune had its Gmail shut down. Its Facebook page was also closed, all done without any warning or explanation.

More recently Facebook has been active in removing accounts and advertising, much of it pro-Palestinian or otherwise critical of Israel, but also to include highly respectable Telesur’s “The Empire Files,” which looked at the consequences of U.S. sanctions on Venezuela. Anything that criticizes the corporate worldview is fair game for censorship. American Herald Tribune, which is critical of U.S. foreign policy in many areas, has recently had its Gmail shut down while Google also stopped servicing ads on its website. Its Facebook page was also closed, all done without any warning or explanation.

One of the organizations most interested in limiting conversations about what is going on in the world is the ADL which claims that it is “the world’s leading organization combating anti-Semitism and hate of all kinds,” though it clearly excludes incitement or even physical harm directed against Palestinian Arabs resentful of the Israeli occupation of their country. Its definition of “hatred” is really quite selective and is focused on anyone criticizing Israel or Jewish related issues. Its goal is to have any such speech or writing categorized as anti-Semitism and, eventually, to have “hate crime” legislation that criminalizes such expressions.

Israel has proposed censorship of the social media platforms on a global scale by creating an “international coalition that would make limiting criticism of Israel its primary objective.”

It would operate through a “loose coalition…[that] would keep an eye on content and where it is being posted, and members of the coalition would work to demand that the platforms remove the content…

It is particularly ironic that Israel, which has now declared that it is in no way subject to international law, has itself proposed across the board censorship of the most prominent social media platforms on a global scale by creating an “international coalition that would make limiting criticism of Israel its primary objective.” It would operate through a “loose coalition…[that] would keep an eye on content and where it is being posted, and members of the coalition would work to demand that the platforms remove the content…in any of their countries at the request of members.”

More recently, Israel has been exposed by Wikileaks as hosting a conference describing how it now has a Command Center that uses Artificial Intelligence (AI) to scan the internet worldwide looking for “anti-Semitic” content. For Israel, anti-Semitic content means any criticism of its government or its behavior towards the Arabs. It reportedly pulls 200,000 posts a day and then reviews them using AI for content considered to be unacceptable. The roughly 10,000 posts determined to be anti-Semitic are then passed on to “intelligence and law enforcement agencies” in countries that have hate speech legislation for further action. The Israeli government also complains directly to the social media source to have the material taken down and works through Jewish organizations in cities and countries where there is considerable “anti-Semitic” activity to pressure governments to act even if there is no legal basis.

The ADL and those who are acting in collusion with the Israeli government are focusing on “cyberhate” as the problem and are working with major internet providers to voluntarily censor their product.

As most genuine independent journalism is currently limited to the alternative media, and that media lives on the internet, the ADL and those who are acting in collusion with the Israeli government are focusing on “cyberhate” as the problem and are working with major internet providers to voluntarily censor their product. On October 10th, 2017 the ADL issued a press release out of its New York City offices to explain just how far the censorship process has gone. The organization boasted of the fact that it was working with Facebook, Google, Microsoft and Twitter “to engineer new solutions to stop cyberhate.” Apple is not identified by name in the press release but one should presume that it is also involved, as well as YouTube, which is owned by Google. When you consider that the associates in this venture with ADL are vast corporations that control huge slices of the communications industry, the consequences of some kind of corporate decision on what constitutes “hate” become clear. Combatting “cyberhate” will inevitably become across-the-board censorship for viewpoints that are considered to be unacceptable, including any criticism of Israel.

ADL will be the “convener” for the group, providing “insight on how hate and extremist content manifests – and constantly evolves-online.” Which means it will define the problem, which it calls the “spew[ing] of hateful ideologies” so the corporate world can take steps to block such material. And “the initiative will be managed by ADL’s Center for Technology and Society in Silicon Valley.”

Facebook already employs thousands of censors and there is literally no limit to how far those who want to restrict material that they consider offensive will go. To be sure, most groups who want to limit the flow of information do not have the clout or resources of ADL with its $64 million annual operating budget so its “cyberhate” campaign will no doubt serve as a model that others will then follow. For ADL, reducing criticism of Israel is a much-sought-after goal. For the rest of us, it is a trip into darkness.

Ironically, YouTube partially censors the above video about censorship, saying: “The following content has been identified by the YouTube community as inappropriate or offensive to some audiences.” It’s not difficult to guess which YouTube community members sought to censor it. Because of this, YouTube prevents the posting of comments on the video, does not show a side list of relevant videos, and makes it difficult to share.)