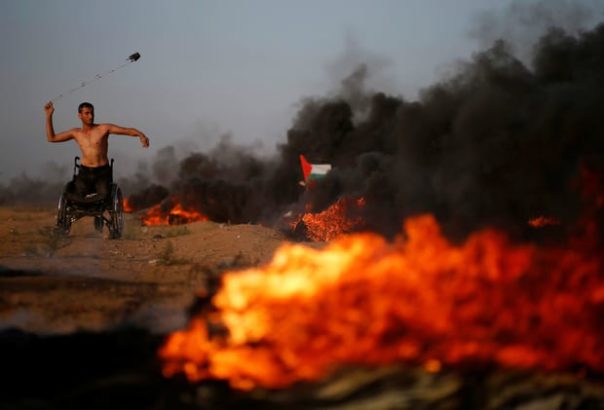 RAFAH, September 29, 2018 (WAFA) – Seven Palestinians, including two children, shot dead by Israeli soldiers on Friday during the Gaza border protests were laid to rest on Saturday in their hometowns across Gaza, reported WAFA correspondent.

Four were laid to rest in Gaza City, two in Bureij refugee camp in central Gaza, and one, the 12-year-old child, was buried in Khan Younis in the south.

Over 508 participants in the protests on Friday suffered various kinds of injuries, 90 from live bullet wounds, one reported very critical and three said in critical condition. Among the injured, 35 were children, 4 women, four paramedics, one of them hit by a live round, and two journalists.

Six Palestinians were shot and killed by Israeli forces and at least 509 were injured on Friday during protests in the besieged Gaza Strip.

The fifth Palestinian who was killed, a 12-year old, has been identified as Naser Azmi Musbeh.

At least 509 were injured, three of them in serious condition. According to Ashraf al-Qidra, the spokesperson of the health ministry, 4 paramedics, 4 media journalists and 90 children were injured by Israeli live ammunition.

Thousands of Palestinians protested on Friday to demand the lift of the 11-year Israeli-blockade over Gaza and the return of Palestinian refugees to their lands and towns in present-day Israel.

It has been six months since Palestinians in Gaza first began participating in the Great March of Return on 30 March – one of the biggest mass demonstrations since the Second Intifada, between 2000 and 2005.

Palestinians marched on Friday under the theme of “Al-Aqsa Intifada Friday” and gathered in large numbers east of Khan Younis in southern Gaza. Video footage of the protest showed protesters removing large coils of barbed wire placed by Israeli forces on the Gaza side of the fence separating the blockaded Palestinian enclave from Israel.

In the occupied West Bank, local media reported that clashes with Israeli soldiers happened in the village of Nahalin near Bethlehem, in Ras Karkar in the Ramallah governorate, and in Kafr Qaddum in Qalqiliya.

Israeli forces and officials have denounced the use of incendiary flying devices by Palestinian protesters – who counter that kites and balloons are the only weapons at their disposal to fight against the occupation.