You Are Here: Home → Ha’aretz: Israeli soldiers beat a detained Palestinian and made his son watch: 5 Indicted for abuse

Ha’aretz: Israeli soldiers beat a detained Palestinian and made his son watch: 5 Indicted for abuse 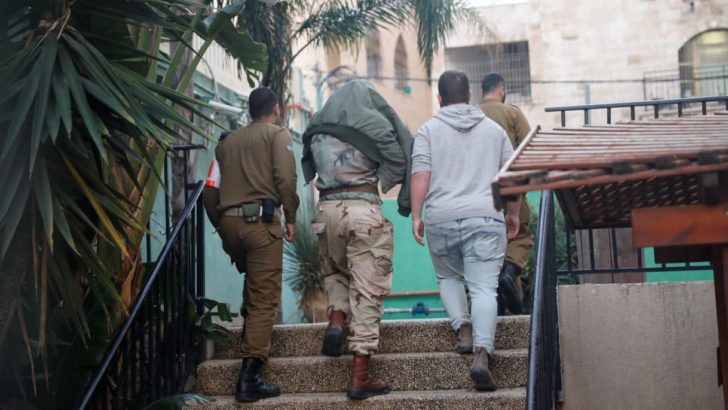 One of the suspects in the beating of detained Palestinians, January 2019.Moti Milrod, from Ha’aretz

Israeli soldiers punched detainees and hit them with sharp objects while they were handcuffed and blindfolded, and then forced the son to watch his father severely beaten

By Yani Kuborich, reposted from Ha’aretz

Israel’s military indicted on Thursday a military commander and five soldiers for beating two Palestinian detainees they had arrested.

According to the charge sheet filed with the military court, the soldiers slapped the two detainees, a father and his son, punched them and hit them with sharp objects, while they were handcuffed and blindfolded.

The charge sheet further details that the soldiers took the blindfold off of the son’s eyes and forced him to watch them beat his father, whose ribs and nose were broken. The soldiers are said to have made “calls of joy and boasting” during the abuse, which they also documented.

The actions of the soldiers, charged with abuse and aggravated assault, resulted in severe injuries. One of the detainees was so badly pummeled that he could not be immediately questioned following the incident and required medical care.

Two of the soldiers were also charges with obstruction of justice, for allegedly coordinating their stories. The case of the soldiers’ commander, a first lieutenant charged with not preventing the violent incident, is being examined separately.

The combat soldiers were arrested in early January and a probe was launched into the January 8 incident on a military base near the West Bank settlement of Beit El.

The military police had looked into whether the soldiers were motivated by revenge following the shooting attack at Givat Assaf last month in which two soldiers from their battalion were killed, but the charge sheet makes no reference to this.

The IDF’s Military Defense said the charge sheet shouldn’t have been filed, claiming the soldiers “were put in an impossible situation” following the attack, “of arresting the terrorists who were involved in the murder of their friends.”

In November, military prosecutors charged a soldier from the Home Front Command’s rescue unit with assaulting a blindfolded, handcuffed Palestinian detainee. In September, a Palestinian died after allegedly being beaten by the Israeli military, according to testimony, although the army denied the claim.

Yaniv Kubovich is a Haaretz Correspondent