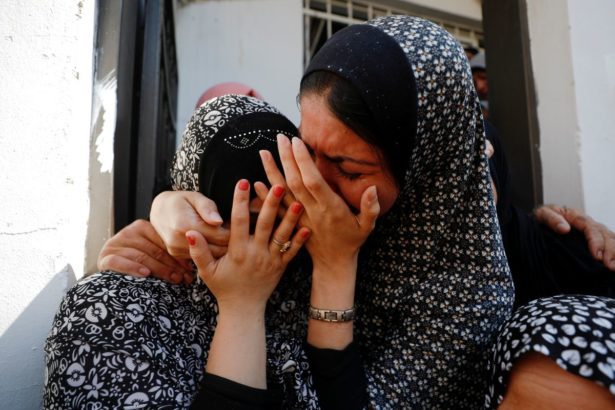 Jenin is the site of more Israeli killing. (Pictured: Relatives mourn during the funeral of Palestinian Saleh Ammar, who was killed with others by Israeli forces when Israeli soldiers invaded Jenin, in the Israeli-occupied West Bank, August 16, 2021.)

Israeli soldiers entered the Palestinian West Bank town of Jenin and its refugee camp on Monday, allegedly to arrest a Hamas member. Instead, they killed 4 Palestinian young men.

Israeli soldiers killed, on Monday at dawn, four Palestinians, and seriously wounded at least one, in Jenin, in northern West Bank, after the army and its undercover forces, invaded Jenin city and Jenin refugee camp, in the northern part of the occupied West Bank.

They added that another Palestinian, identified as Nour Abdullah Jarrar, 19, from Jenin city, was also killed by the soldiers, who took his corpse.

The soldiers also shot and seriously injured a fourth Palestinian, identified as Amjad Eyad Azmi Husseiniyya, 20, who succumbed to his wounds after the soldiers abducted him.

Media sources in Jenin said the Israeli soldiers’ killing of the Palestinians took place when undercover Israeli soldiers infiltrated into Jenin refugee camp using a civilian car before the soldiers stormed an under-construction residential building and secretly occupied its rooftop.

They added that many Israeli army jeeps then invaded the refugee camp and exchanged fire with Palestinian resistance fighters who were unaware of the undercover soldiers occupying the building and were killed by their gunfire.

One Palestinian, identified as Qassam Mohammad Taha, 24, suffered various gunshot wounds to his left arm and was rushed to Jenin governmental hospital.

In addition, the army invaded and ransacked homes in the Jenin refugee camp, and abducted a young man, identified as Mohammad Abu Zeina.

National factions in Jenin declared a general strike to mourn the slain Palestinians.

The Israeli army claimed its soldiers, including the undercover officers, invaded Jenin to arrest a member of the Hamas movement, before an exchange of fire took place between the soldiers and Palestinian resistance fighters.

The army added that no injuries were reported among the soldiers.

If you want to do something about the human rights abuses against Palestinians, contact those who send our money to Israel and tell them NO MORE.