You Are Here: Home → Israel lies after soldiers choke and kill Palestinian boy 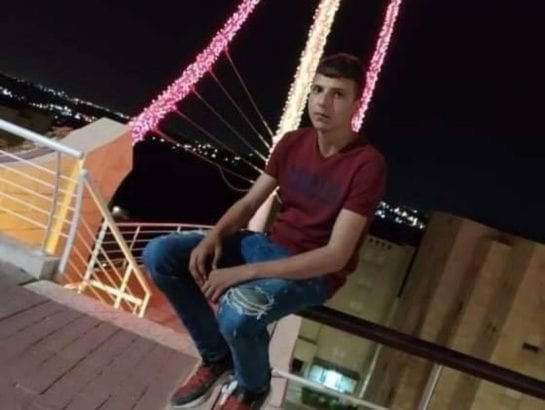 Israel frequently lies about the circumstances in which Palestinian children are killed and seriously injured. Often, blaming the victim.

By Maureen Clare Murphy, reposted from The Electronic Intifada

The Israeli military claims that it is not responsible for the death of Amer Snobar, 16,* in the central West Bank on Saturday night, claiming that the teen fell.

Doctors say he died after being beaten and asphyxiated by soldiers.

The teen was helping a friend move a broken-down car near the village of Turmusayya, north of Ramallah, when Israeli soldiers arrived, according to Defense for Children International Palestine.

“The friend managed to flee on foot to some nearby trees where he became an eyewitness to Snobar’s killing,” according to the rights group.

Israeli forces killed 16-year-old Amer Abdel-Rahim Snobar on Saturday night northeast of Ramallah in the occupied West Bank. He was choked and beaten by 6 Israeli soldiers, according to eyewitness. https://t.co/5ttkBGYxZB pic.twitter.com/LOHmVZ4P1r

The military, however, gave the improbable explanation that the boy lost consciousness and fell while being chased by soldiers who were called to the area following reports of stone-throwing.

The Israeli daily Haaretz cited an unnamed defense official who told the paper that “soldiers did not come in contact with the suspect until they gave him first aid, nor did they fire at him.”

Israel’s claim that Snobar died as a result of falling, rather than being beaten by soldiers, recalls the case of Muhammad Tamimi.

The 15-year-old was shot in the head with a rubber-coated metal bullet at close range following protests in the West Bank village of Nabi Saleh during December 2017. Muhammad was severely injured and detained by Israel.

An Israeli general accused the Tamimi family of lying, writing on Facebook that the boy confessed – during an interrogation with neither his parents or lawyer present – that he had injured his skull when falling off of his bike.

However, the teen’s medical records show that a bullet was removed from Muhammad’s head during emergency surgery.

A journalist with the French news agency AFP reported that the frightened boy told his interrogators that he fell off his bike “to avoid jail for protesting.”

Israel frequently lies about the circumstances in which Palestinian children are killed and seriously injured.

Earlier this year, soldiers opened fire on a car full of Palestinian teenagers in the West Bank, claiming the youths had attempted to attack them with the vehicle.

But an investigation by a human rights group found that there was no attempted attack before Israeli soldiers opened fire the evening of 20 February.

A boy sitting in the back seat was hit in the thigh and back and critically injured. Another teen was wounded, apparently by shrapnel.

Two of the teens were beaten by soldiers.

Palestinian children who are arrested by Israel are frequently subjected to physical violence.

Israel prosecutes between 500 to 700 Palestinian children in its military courts each year, according to Defense for Children International Palestine.

Five Palestinian children – including Amer Snobar – have been killed by Israeli soldiers in the West Bank so far this year [info here].

Maureen Clare Murphy is an associate editor of The Electronic Intifada and lives in Chicago.