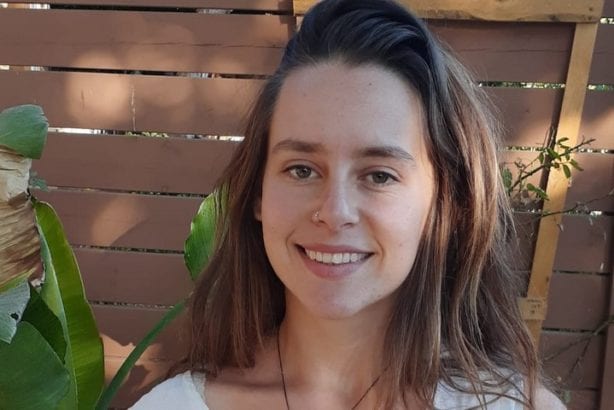 Israeli conscientious objector, Hallel Rabin, is serving a prison term for refusing to serve in the IDF based on her reasons of conscience and pacifism.

Hallel Rabin, 19, comes from Harduf in the Lower Galilee – an innovative vegetarian community inspired by Rudolf Steiner’s anthroposophy. About a quarter of the 600 inhabitants are people with special needs who live in the kibbutz’ four rehabilitative homes.

Since October 21, Hallel has been serving a 25-day sentence in Israel’s Military Prison No. 6 for refusing conscription into the IDF. This is her third spell of incarceration. The official committee that considered her application for conscientious objector status voted 3—2 to reject the application because her motives amount to political opposition rather than absolute pacifism.

“I was raised,” says Hallel, “on the values of freedom, compassion, and love. Fighting to keep another nation enslaved contradicts these values. For too long, the good people of Israel have agreed to participate in the occupation’s atrocities. While I know my refusal is small and personal, I wish to be the change I want to see in the world and to show that another way is possible. Little people make big changes. It is time to shout: There is no such thing as good repression, no such thing as justifiable racism, and no more room for the Israeli occupation.”

Mesarvot (a group that helps draft refusers) and Yesh Gvul (There is a Limit) held a protest vigil supporting Hallel Rabin on Saturday, October 31 – on the hillside facing Prison No. 6, from where demonstrators are visible and audible to prisoners and guards.

Stephen D. Shenfield is an independent researcher and translator living in the US.