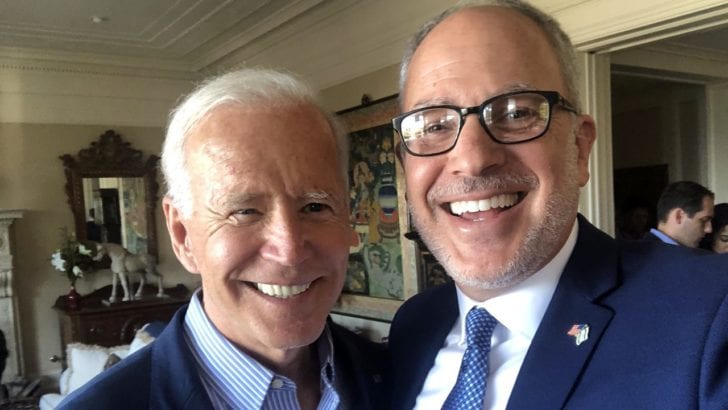 Lauter originally met Biden at an AIPAC conference in about 1983, telling him after listening to his speech, “When I graduate from Cal., I’m moving to D.C. to work for you.” (Lauter’s mother, Naomi, was involved in AIPAC’s founding…)

He later became AIPAC head for the Bay Area, and is currently a board member of the Democratic Majority for Israel, which tries to strengthen support for Israel within the Democratic Party. He says he has kept in touch with the former vice president on and off over the past 30-plus years…

By Gabe Stutman, reposted from The Jewish News of Northern California (J), Nov. 4, 2020

With one of the most contentious and divisive presidential elections in modern history still in the balance the day after election day, and with little hope for a quick resolution, Democratic political strategist and fifth-generation San Franciscan Sam Lauter spoke with J. Wednesday morning after a restless night.

Lauter shared his perspective on the current state-of-play in the race, saying he remains “cautiously optimistic” about a Biden victory (with an emphasis on cautiously).

Lauter entered politics as a teenager as a staffer for Rep. Phillip Burton, a congressman who died in 1983. Lauter earned a political science degree from UC Berkeley, then in 1986 went to work for Sen. Joe Biden in Washington, D.C., serving as his personal assistant for about a year.

He had met Biden at an AIPAC [American Israel Public Affairs Committee] conference about three years prior, picking up the senator at the airport, and later telling him after listening to his speech, “When I graduate from Cal., I’m moving to D.C. to work for you.” (Lauter’s mother, Naomi, was involved in AIPAC’s founding and served as a regional leader for the pro-Israel advocacy group .)

These days, Lauter is a principal at the Oakland-based political consultancy BMWL and Partners. He is also former AIPAC head for the Bay Area, and a board member of the Democratic Majority for Israel, which tries to strengthen support for Israel within the Democratic Party. He says he has kept in touch with the former vice president on and off over the past 30-plus years.

[Editor’s note: the Democratic Majority for Israel was created because a growing number of Americans are learning the facts about Israel’s human right abuses, violence, and systemic discrimination.]

Biden had a big electoral-college lead as of 2:05 p.m. Wednesday, needing only 17 more to hit the necessary 270 after several news outlets called Michigan and Wisconsin for the former VP.

President Donald Trump alarmed but didn’t surprise Democrats by claiming victory in a late-night tweet onTuesday, saying that people were trying to steal the election by counting mail-in votes after the polls had closed. The Trump reelection campaign on Wednesday filed a suit in Michigan seeking to stop the ballot count in that state “until meaningful access has been granted” to observe the counting process, and announced other possible legal challenges across the country.

Lauter did not rule out an electoral victory for Trump after all the votes were counted, which he predicted could take until Friday. He pointed to the president’s over performance in states like Texas and Florida, where Democrats invested a lot of money and Trump still won commandingly. “He surprised everybody four years ago,” Lauter said, “and he has surprised most people this time out.”

This interview has been edited for clarity and concision.

J.: Considering your familiarity with Joe Biden, what do you imagine his attitude is toward this process right now?

Sam Lauter: This is a person who’s been through incredible life impacts over and over. What I think he’s doing right now is calmly retelling everyone around him to remain calm and let the votes be counted. My best guess is that Joe Biden is surrounded by his inner circle of folks. And he is saying to all of them, “Be patient. There are votes to count. Every vote has to be counted. And then we’ll see.’

You have said you are cautiously optimistic that Biden will be elected president. What gives you that optimism?

Nevada, Wisconsin, and Michigan. I would love to see Pennsylvania fall Biden’s way. But if he gets Nevada, Michigan and Wisconsin then technically, to win, he does not need Pennsylvania. [Editor’s note: Wisconsin and Michigan have been called for Biden since this interview. Biden must also win Arizona, which some media outlets had called for him, but others had not as of Wednesday afternoon].

Now, to govern the way I hope he’s able to govern, [winning Pennsylvania] would sure be helpful. But I remain cautiously optimistic because the numbers remain where they are.

I was under no impression there would be some great blue wave sweeping the nation. I did think and remain confident it was a good thing for the Biden campaign to compete in Texas and Georgia and North Carolina and Florida because they had the resources to do it, without neglecting anywhere else. I did not buy the concept that those states could flip.

I did think we would win a few more House seats, and not have the spread shrink. That surprised me. I understood why people thought we could flip the Senate; I was confident in two seats, not really confident in the rest.

If you were a Trump supporter, what would be giving you confidence right now?

From a more cynical point of view, if I’m a Trump supporter, I look at the fact that there will be a legal fight. I look at the Supreme Court, and think, “We’ve got this.” I appreciated seeing people like [former New Jersey Gov.] Chris Christie and [Conservative pundit] Ben Shapiro [ speak out against the president’s early declaration of victory and his trying to denigrate the count process. That gives me hope that there are people who will only go so far.

There will be protests.

The only question is will the protests reflect the diversity of this country, or will the protests be from a community of people who think protesting with sidearms is going to make us in California think well of them. I don’t imagine any quick healing by any stretch of the imagination. I have a hard time seeing that. It’s just too close.

As for the legal challenges, I have no ability to tell you how long that’s going to be drawn out.

In Florida in 2000, there were fights over hanging chads [and] butterfly ballots. Are the arguments [this time] going to be more straightforward? Is the Trump side going to argue, “You shouldn’t have been able to count these X votes,” while the Democrats argue, “Of course you count them, they arrived on time and you don’t disenfranchise voters.” That’s what I don’t know.

Republicans have made it clear they’re going to challenge this in court. So if things continue to move in the direction we’re seeing, which would result in a Biden victory, then there will be a legal challenge. If they don’t continue to move in that direction, and one of those states that remains close flips, then I believe Joe Biden — unless there’s some incredible evidence I’m unaware of and will be unaware of until it’s presented — Joe Biden will concede. He won’t fight it out in the courts.

What worries you more, that the legal challenges will be successful, or the uncertainty and chaos that will follow?

I’m equally concerned. The [Republican Party] has succeeded in taking over the judiciary. Some of these people, I absolutely believe that they believe in country over party. Some of them, I can’t say I believe that.

Obviously, the fact that a legal challenge could come to a Supreme Court that has a 6-3 conservative majority is concerning. I’m not saying that all six of those people believe in party before country. But I don’t know that they don’t. [Supreme Court Justice Brett] Kavanaugh made an argument recently that was the exact opposite of the argument he made when he was part of the legal team for [George W.] Bush in Florida. You wonder if Kavanaugh really does believe in country over party. There’s factual evidence to make that question relevant. [Editor’s note: apparently Lauder considers it appropriate to suggest that some Republicans put loyalty to party over America, but would likely claim it is ‘antisemitic’ when anyone suggest that some Israel partisans may sometimes place loyalty to Israel over America.]

I’m equally worried about the chaos that ensues. I’m saddened by how split this country is. It’s pretty hard to say the name of our country without skepticism. The United States of America doesn’t seem it right now.

Gabe Stutman is the news editor of J.