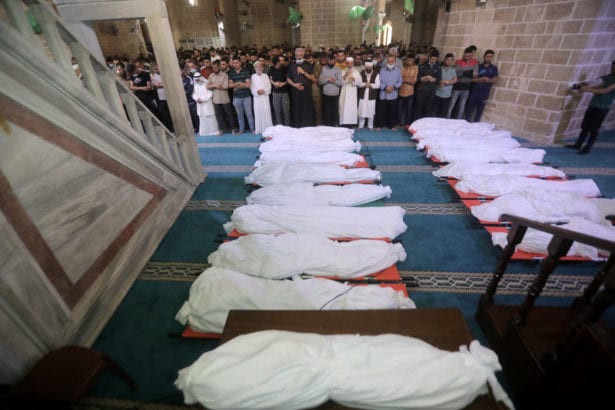 Mourners pray over the bodies of Palestinians killed in overnight Israeli airstrikes in Gaza City on 16 May. (Atia Darwish APA images)

By Tamara Nassar, reposted from The Electronic Intifada

Israel in the early hours of Sunday night obliterated multiple generations of families when it bombed their homes in Gaza.

Around 1 am, Israeli warplanes launched a savage bombing campaign lasting at least an hour, firing 50 missiles at the area surrounding al-Wihda street in Gaza City.

Without warning, the bombs hit residential buildings, bringing them down on top of those inside.

The death toll from the attack has risen to 42, including 10 children and 16 women. Fifty more were wounded.

Two prominent doctors were among the dead.

As of Sunday evening, rescuers were still searching for survivors under the rubble.

This has raised the death toll in Gaza since Israel’s bombing campaign began last Monday to at least 192, including 58 children and 34 women, according to the health ministry in the territory.

More than 1,200 people have been injured.

In the attack, early Sunday, multiple generations of the al-Qawlaq family – at least 17 people – were killed. The youngest victim, Qusay Sameh al-Qawlaq, was 6 months old, and the oldest was 84-year-old Saadiya Yousef al-Qawlaq.

Israel also bombed civic infrastructure, businesses, and the main roads leading to the city’s al-Shifa hospital, according to Al-Mezan, a human rights group in the territory.

After bombing residential buildings in #Gaza, "Israel" bombed all the streets leading to Shifa Hospital, the largest medical facility in Gaza. Ambulance vehicles cannot leave/enter the hospital while tens of civilians are buried alive under the rubbles.#GazaUnderAttack pic.twitter.com/8R7V3voWGl

Abir Ishkinta, 29, was killed in the blast.

Their father Riyad Ishkinta was pulled out of the rubble alive on Sunday.

His daughter Suzie Ishtinka was also reportedly pulled out alive after hours under the collapsed building:

As medical staff in Gaza cope with a surge of injured people, they have not been spared Israel’s onslaught.

Dr. Ayman Tawfiq Abu al-Ouf, the chief of internal medicine at al-Shifa hospital, died along with two of his children, Tala, 13, and Tawfiq, 17.

Dr. Muin al-Aloul, a neurologist, was also killed in the Israeli bombing.

Doctors mourned their colleagues on Sunday.

Two other members of the Abu al-Ouf family were also killed.

The Israeli bombing also destroyed a Médecins Sans Frontières clinic as well as an orphanage.

Last night, an MSF clinic in #Gaza where we provide trauma and burn treatment was damaged by Israeli aerial bombardment, leaving a sterilization room unusable and a waiting area damaged. No one was injured in our clinic, but people were killed by the bombing. pic.twitter.com/Dwol0EPXEr

As Israel continues its aerial and artillery bombardment of #gaza many MSF staff and patients have been forced to flee their homes for safety. The damage to our clinic shows no place in Gaza is safe. pic.twitter.com/m4yYn1Nm6x

The massacre early Sunday was “one of the most horrific crimes” Israel has committed during its ongoing war against the people of Gaza, according to Euro-Med Human Rights Monitor.

But the group noted that “the attack was not an isolated incident, but another example of Israel’s systematic policy that we have witnessed over the past six days.”

All were women and children.

Ashraf al-Qidra, the Gaza health ministry spokesperson, reportedly said on Saturday that about 12 families who were massacred “were completely erased from the Palestinian civil registry.”

On top of the death, injury, and destruction, some 38,000 Palestinians in Gaza have been displaced from their homes as a result of Israel’s offensive and are seeking shelter in 48 schools run by UNRWA, the UN agency for Palestine refugees.

Palestinian resistance organizations in Gaza have fired about 3,000 rockets towards Israel since Monday, according to Tel Aviv daily Haaretz.

Ten people have died in Israel, including one soldier fatally wounded when an anti-tank missile fired from Gaza hit his vehicle.

Buthaina Obaid, a 6-year-old Palestinian living in northern Gaza, was killed by shrapnel from a rocket-propelled grenade on Friday, according to Defense for Children International Palestine.

The source of the grenade remains uncertain.

Israel targeted more than 80 buildings in the past week, including six high-rise towers, three of which were completely destroyed. More than 340 housing units have been destroyed.

More than 2,500 people are homeless as a result.

That number is expected to rise, as many buildings were completely destroyed and Al Mezan field researchers cannot yet perform an accurate survey given the ongoing bombing and a large number of displaced people.

Several of the destroyed buildings housed local and international news agencies, including the Associated Press and Al Jazeera.

Israel’s bombardment in #Gaza continued for a fifth consecutive day, with Israeli air raids hitting a refugee camp where several Palestinians, including children, were killed.

A few minutes before Israel bombed the Jalaa tower housing dozens of media offices, journalists of @AJArabic and @AP are seen trying to grab as much valuable equipment as they can. The building was targeted by 8-10 F16 missiles and knocked to the groundpic.twitter.com/fhFDyACGzm

Youmna Al Sayed reporting for @AJEnglish outside a #Gaza hospital as it’s the ‘safest’ place for her. She tells @hallamohieddeen “We’re talking about international media ..I don’t know where is the alarm or any Hamas members that could be in this building..we all know each other” pic.twitter.com/ps49YdXOL6

Israel has claimed Hamas military intelligence was using the building, but an Israeli official was unable to provide any evidence when pressed by US public radio network NPR.

Even if that Israeli claim were true, under the laws of war, Israel’s destruction of entire buildings would be wholly disproportionate.

Rather, Israel’s mass destruction of buildings and infrastructure appears to fit the pattern of the Dahiya Doctrine – named after its 2006 destruction of the southern suburb of Beirut.

The goal is to deliberately inflict such pain and suffering on the civilian population and society at large as to deter anyone from resisting Israel’s occupation. This can be prosecuted as a war crime.

Reporters Without Borders sent a letter to Fatou Bensouda, chief prosecutor of the International Criminal Court, urging an investigation of Israel’s targeting of the offices of 23 media organizations in Gaza over the past week.

As it has in previous assaults on Gaza, Israel is “deliberately targeting civilian homes and wiping out residential neighborhoods,” Euro-Med Monitor said on Friday.

Electricity, perennially in short supply in Gaza, is even more scarce, with availability reduced to about four hours a day or less on average, according to Al Mezan.

Almost half of Gaza’s population is currently “without any power.”

“This affects all aspects of life, including hospitals and clinics,” Al Mezan said.

Elderly people and those with disabilities are especially affected by electricity shortages: When elevators are inoperative, they cannot escape buildings under attack.

This is an additional form of collective punishment, Al Mezan said.

Gaza’s health ministry warned of an upcoming COVID-19 outbreak in Gaza amid the Israeli bombardment, which prevents Palestinians from reaching testing and vaccination centers.

There is no end in sight to the Israeli massacre in Gaza.

US Secretary of State Antony Blinken said he spoke to the Egyptian foreign minister on Monday, adding that “All parties need to de-escalate tensions – the violence must end immediately.”

But so far, the United States has shown either indifference or open support for Israel as the civilian death toll from its bombing campaign mounts.

President Joe Biden told reporters on Thursday that he had not seen a “significant overreaction” from Israel.

The US provides $3.8 billion in military aid to Israel each year. American weaponry is confirmed to have been used in the deaths of at least two Palestinian children in Gaza this week.

Earlier on Sunday, Prime Minister Benjamin Netanyahu said the bombing campaign “continues in full force” and that it “will take time.”

But this will not take place until Tuesday – a distinct lack of urgency that gives Israel at least another two days to kill Palestinians free from pressure.

Al Mezan said that the “chronic inaction by the international community facilitates and perpetuates Israel’s continued and escalated violence in Gaza.”

The human rights group reiterated its call on ICC prosecutor Bensouda to move forward with the court’s war crimes investigation.

Tamara Nassar is an assistant editor at The Electronic Intifada.