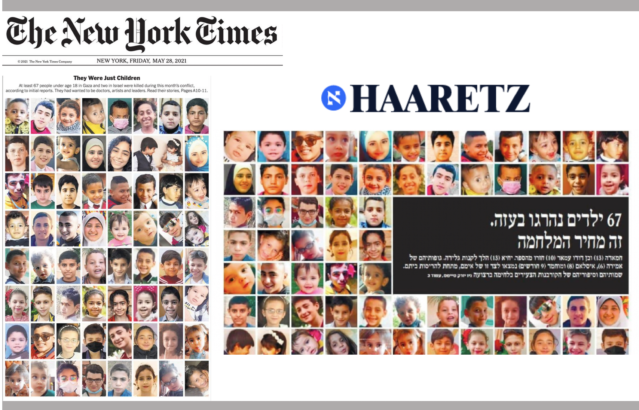 The New York Times front paged featured the photos of the 67 children killed by Israeli forces in the recent 11-day bombardment campaign against Gaza, and the next day the Israeli newspaper Haaretz did the same.

In unprecedented actions, the front pages of the New York Times and the Israeli daily newspaper Ha’aretz featured photos of the 67 children in Gaza who were killed by Israeli airstrikes this month. Some Israel partisans called this a ‘blood libel.’

Below are some of the responses, first in the US, then in Israel, to this striking acknowledgement of the existence of Palestinians and their deaths at the hands of Israel (you can view the online version of the NYT article here; the Ha’aretz piece appeared only in print, in Hebrew).

by James North and Philip Weiss, reposted from Mondoweiss, May 28, 2021

We need to acknowledge what an extraordinary moment this is. Mainstream media are finally focused on Israeli attacks on Palestinian children.

The New York Times did the unprecedented, and devoted a huge portion of its front page to the images of 65 children, almost all of them Palestinian, killed during the recent onslaught. The accompanying report is almost impossible to look at, it is the face of innocence, beauty, hope, all defiled. Notes the Times: ”

In all 69 children were killed, two of them Israelis. Nothing like this took place in 2014 when Israel killed 526 children. While in 2018, the New York Times ran four columnists’ justifications of Israel’s slaughter of over 200 unarmed protesters on the Gaza border, as well as the maiming of thousands more.

Never thought I’d see the day when Palestinian victims were pictured, named, & their stories told. These children deserve to be known. Showing us the humanity of Palestinians is an important 1st step in forcing a recognition that #PalestiniansLivesMatter & insuring their rights

This makes me feel bitter. For decades @nytimes has been and remains one of the leading outlets for racist  Zionist propaganda dehumanizing Palestinians and justifying their murder. This does not wash their crimes away.

And notice the angry/unhinged response from Abe Foxman. The news is antisemitic; publishing such pictures is a “blood libel.”

I am cancelling my subscription to NYTimes. I grew up in America on the NYT… but no more. Today’s blood libel of Israel and the Jewish people on the front page is enough..

Also significant in the changing optics of the conflict in the United States was this stirring NBC Nightly News report by Andrea Mitchell from Sheikh Jarrah in occupied East Jerusalem two nights ago. The veteran international correspondent’s report was an insistent call on Secretary of State Antony Blinken to stop the evictions of Palestinians. It featured Dr. Ahmad Tibi, the Palestinian member of Knesset, telling Blinken to “intervene”– yes, Ahmad Tibi on NBC Nightly News. Mitchell:

Protests today in East Jerusalem where 700 more Palestinians are fighting evictions to make room for Jewish settlers. The first question I got when I got here is, What did Blinken say? What did Blinken say? They wanted to know, what did the U.S. Secretary of State say about the threat that they are going to be evicted from their homes?

Today they have new hope after Blinken said Israel should stop demolishing their homes.

The best part of the report was when Mitchell observed the brutal arrest of a child, and said so:

We don’t know how this started, but we saw a 15 year old boy getting beaten and carried off  by police. People say, ‘Leave him, he is a child, he is a child!’”

We can only hope that this emphasis will continue in the U.S. press, including a look at some of the 100s of thousands of young people in Gaza denied any hope of fulfilling their dreams. [This was an unprecedented action by Mitchell, who has said that as a Jewish woman she felt “a tremendous emotional connection to the issue.”]

Israel lobbyists are seeing what we are seeing and they’re panicked. CAMERA points to a string of pro-Palestinian op-eds in the New York Times op-ed page– “balanced” today by a religious Zionist offering from Rabbi David Wolpe about how Jews have been in that land since biblical days.

That string includes Diana Buttu’s fine piece on the “nakba, the ethnic cleaning of Palestine,” that details the destruction of her father’s village of Mujaydil and the creation on its lands of a Jewish-only town called Migdal Haemek.

That piece was accompanied by this excellent graphic on the loss of land under assigned Palestinian control since 1948. The graphic is similar to one featured in Palestinian solidarity postcards and posters.

The Times response to the criticism is laughable, saying that the image is an “artwork’ that is not meant to convey historical information!

P.S. Weiss notes: In 2014, Brooke Gladstone hosted me on the NPR show “On the Media” to talk about the 526 Palestinian children then being killed in Gaza. Gladstone got a lot of pushback from pro-Israel folks at the time; which may explain why “On the Media” hasn’t touched the issue since, that I’m aware of. (Please tell me I’m wrong Brooke).

‘This Is the Price of War’: Israeli Newspaper Haaretz Publishes Photos of All 67 Palestinian Children Killed in Gaza Onslaught

Human rights advocates and journalists applauded the Israeli newspaper Haaretz for its “unprecedented” cover story Thursday—one featuring the photos and stories of 67 Palestinian children killed in the latest bombardment campaign by the Israel Defense Forces.

“This is the price of war,” the headline read.

The article came a day after the New York Times published its own extensive account of the youngest victims of Israel’s most recent 11-day offensive, in which the IDF frequently targeted residential areas of Gaza, known as the world’s largest open-air prison.

“This is unprecedented,” Fishman tweeted.

While Haaretz leans to the center-left editorially, Israeli’s mainstream media has traditionally not covered the Palestinian casualties of the IDF’s military campaigns and the Israeli government’s violent policies, said journalist Khaled Diab.

As Diab tweeted, previous attempts by organizations in Israel to publicize the human cost of the IDF’s assaults have been repressed.

Going against Israel's mainstream media practices, today's Hebrew edition of Haaretz publishes the photos of the 67 children who were killed in Gaza.#Gaza https://t.co/lEk9FEN0mN

During the 2014 war, human rights group @btselem tried to counter the wilful silence in the Israeli media about the victims of Israeli airstrikes. It paid for a radio spot naming the dead children. The Israel Broadcasting Authority banned it.#Gaza https://t.co/eSCDXJ92YF

Others on social media took note of the unprecedented cover story.

Wow. Front page of the Israeli newspaper Haaretz features the faces of the all the Palestinian children killed in Gaza.

The headline reads: “67 kids were killed in Gaza. This is the price of war.” https://t.co/JMcvm3tg8x

In a publishing first, Haaretz, read by the israelis, prints the 67 name and faces of the Palestinian children, slaughtered by israelis | #Gaza pic.twitter.com/InmmAWdrKv

Thank you @Haaretz for publishing the faces of these 67 beautiful children.

Like the Israeli kids killed, they were victims of the endless bloodletting of a conflict & an occupation that will only end with Palestinian freedom and self-determination. https://t.co/s3W6TyBjVM

“Conversations around Israel/Palestine are changing in Jewish communities across the globe,” tweeted rabbi and author Abby Stein. “It’s about time.”

As Jewish Currents editor-in-chief Arielle Angell wrote last week in The Guardian, since Israel’s 2014 50-day assault on Gaza, which killed more than 2,100 Palestinians, rights advocates have “seen the growth of a small but committed Jewish anti-occupation movement [and] the last week and a half have brought an even larger circle of the community to a place of reckoning.”

We’ve seen Jewish politicians, celebrities, rabbinical students and others speak up loudly for Palestine. We’ve seen a powerful display of solidarity from Jewish Google employees, asking their company to sever ties with the IDF. At Jewish Currents, the leftwing magazine where I am now editor-in-chief, we asked for questions from readers struggling to understand the recent violence. We’ve been deluged. These questions taken in aggregate paint a striking portrait of a community at a turning point.

In Israel the Haaretz front page appeared to touch a nerve, garnering at least one outraged response from Oded Revivi, head of the Efrat Regional Council in an Israeli settlement in the West Bank, who said Haaretz‘s article was evidence that “people pity the wrong mothers.”

On social media, Mairav Zonszein of the International Crisis Group said rather than the “price of war,” the Haaretz front page specifically shows the price of “Israel’s “continued military rule, dispossession, discrimination, and violence.”

To see details of the casualties on both sides during the recent hostilities, go here. To see all casualties since 2000, go here.