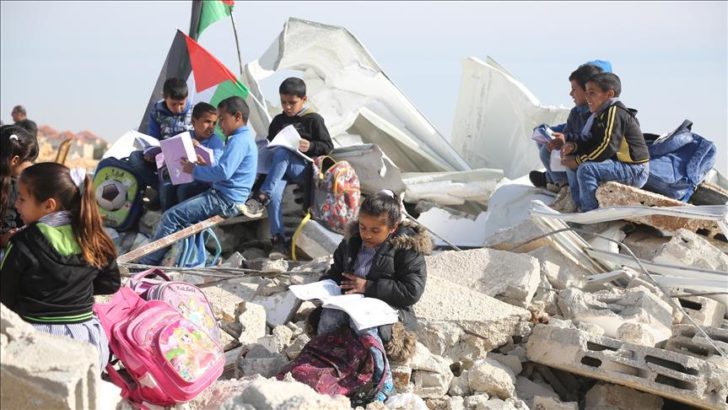 Israel chooses to demolish a Palestinian kindergarten today. (Pictured: After a previous school demolition, Palestinian schoolchildren continue to study on the debris of their school building after Israeli forces demolished the classrooms, Jerusalem, February 04, 2018.)

Just as a new school year is getting underway, Israeli forces demolish a brand-new Palestinian kindergarten, citing, as usual, “lack of permit” in the context of an occupation that only rarely dispenses permits to non-Jews.

The sources told WAFA that the Israeli forces escorted a Jerusalem municipality bulldozer to al-Safeh area in the town, where the heavy machinery tore down a kindergarten belonging to Mohammad Jum‘a.

The kindergarten, adjacent the Jum‘a family’s house, was supposed to open its doors with the beginning of the new school year.

Using the pretext of illegal building, Israel demolishes houses on a regular basis to restrict Palestinian expansion in occupied Jerusalem.

At the same time, the municipality and government build tens of thousands of housing units in illegal settlements in East Jerusalem for Jews with a goal to offset the demographic balance in favor of the Jewish settlers in the occupied city.

Although Palestinians in East Jerusalem, a part of the internationally recognized Palestinian Territory that has been subject to Israeli military occupation since 1967, they are denied their citizenship rights and are instead classified only as “residents” whose permits can be revoked if they move away from the city for more than a few years.

They are also discriminated against in all aspects of life including housing, employment and services, and are unable to access services in the West Bank due to the construction of Israel’s separation wall.

According to a report by the Israeli human rights group B’Tselem, the Israeli High Court could be liable for war crimes for their policies that led to the dispossession of Palestinians from their properties in Area C of the West Bank.

The report, Fake Justice, shows that the court’s support of Israeli planning policy is tantamount to support for dispossession and forcible transfer of Palestinians, a war crime under international law.