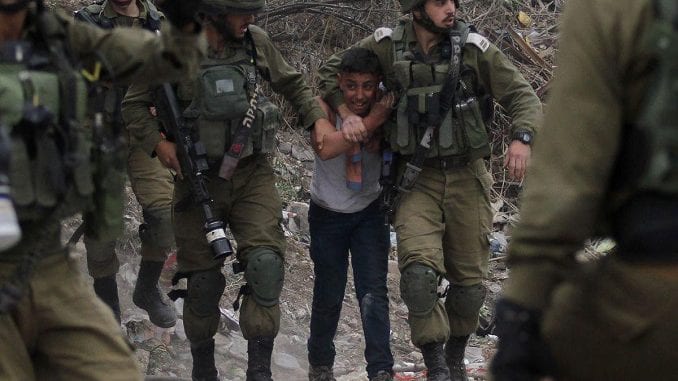 Israelis arrest a Palestinian boy for demonstrating against Trump’s decision to recognize Jerusalem as the capital of Israel. (Photo: Anadolu, via MEMO)

For no apparent reason, Israeli forces fired tear gas and stun grenades at a Palestinian high school during midterm exams.

from The Palestine Chronicle

A number of Palestinian students suffered from suffocation after Israeli forces fired tear gas and stun grenades at their high school in the town of Ya’bad, southwest of Jenin in the occupied West Bank.

A school teacher told WAFA that Israeli forces raided the school of Izz al-Din al-Qassam in the morning while the students were sitting for their midterm exams causing panic among them and disrupting the exams.

He noted that the soldiers broke into the school without any warning even thought there were no clashes in that area at that time.

Soldiers are regularly present in the school vicinity, often provoking students as they come to and leave their school, said the teacher.