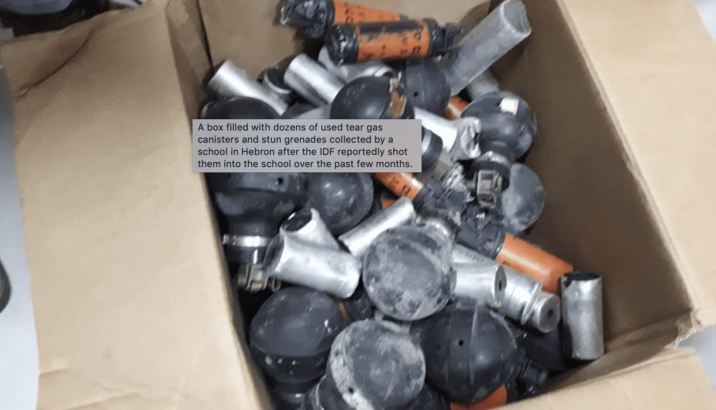 A box filled with dozens of used tear gas canisters and stun grenades collected by a school in Hebron after the IDF reportedly shot them into the school over the past few months.

The Israel Defense Forces said their army doesn’t launch stun grenades or tear gas into Palestinian schools, but after a video surfaced it altered its response, blaming “the wind.”

An Israeli soldier was filmed shooting tear gas into a Palestinian school in Hebron during school hours, despite military denials. A military source later said the soldier apparently shot in response to rocks thrown by students.

Palestinians have reported that soldiers have been shooting tear gas and stun grenades into schools, but the Israel Defense Forces has denied such incidents. Haaretz obtained a video documenting at least one such incident.

Last week, Palestinians reported to Israeli veterans’ anti-occupation group Breaking the Silence an increase in the scope of tear gas launched at Hebron schools located in an area of Hebron where many schools can be found, including primary schools.

In response to a query posed by Haaretz to the military last week, the IDF spokesperson said that the army does not launch stun grenades or tear gas into schools.

“Riots take place on a weekly basis in the vicinity of schools, where rocks are thrown at forces and civilians. As a rule, no tear gas is used against schools. However, the changes in weather must be taken into account and some of the tear gas smoke might disperse with the wind in different directions,” the spokesperson said.

However, a video taken outside the Al Khalil School for Boys in Hebron refutes the IDF spokesperson’s claim. The video, taken on November 18, shows an Israeli soldier throwing a canister into the school’s yard, followed by tear gas rising from it. Furthermore, teachers told Haaretz that soldiers throw canisters at the school on a daily basis.

The school’s superintendent keeps a box with dozens of used grenades and canisters, which he says were thrown at the school over the past couple of months. Dozens of photographs on display in the school, which teachers say have been taken since 2015, document student arrests and incidents of tear gas canisters thrown at the school.

A security source told Haaretz children throw stones from the school’s facilities and added that that Israeli army has been in touch with the school’s administration concerning this.

The IDF spokesperson altered his response following Haaretz’s query and the recent video. He confirmed the incident, but said it is unusual and will be looked into. “Whenever stone throwing poses a danger, the forces act to disperse the riot using riot control gear and according to operational needs and regulations,” the spokesperson said, adding that the incident documented in the video “will be investigated and regulations clarified.”

Ron Zaidel, director of research for Breaking the Silence, said that “while thousands of Palestinian students are suffocating from tear gas, the IDF spokesperson is trying to put up a smoke screen to hide the reality on the ground from the public. But the thousands of testimonies that we have collected over the years clearly show that violence against children is an unavoidable part of the military dictatorship ruling a civilian population. When the facts are clear and known, each and every one of us must ask ourselves a simple question: Is this reality acceptable to us, or is it not?”

The Breaking the Silence testimonial collection includes a testimony by a former Nahal soldier, a branch of service in which soldiers combine active duty with work in civilian populations in Israel. In 2013, the soldier testified that he was a witness to tear gas canisters thrown at children outside of a school. Haaretz could not reach the witness for comment.