You Are Here: Home → Marc Lamont Hill’s “anti-Semitism” is a distraction 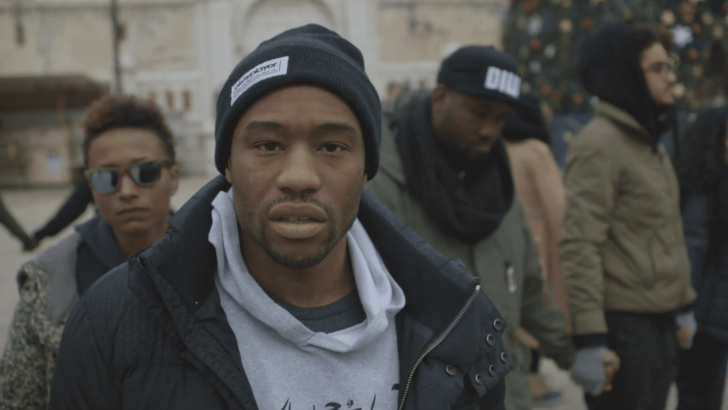 As is often the case with proponents of justice for Palestinians, Marc Lamont Hill was watched closely by Israel partisans as he spoke before the UN last week. They took a phrase – one phrase – from the speech and threw the rest aside, hoping the world would do likewise. Ever since, we’ve been herded toward the anti-Semitism charge and away from any reflection on the actual issue.

Looking at mainstream media headlines during the last week, one might imagine that Marc Lamont Hill stood up in the UN chambers, cried out “Free Palestine from the river to the sea and wipe Israel off the map,” dropped mic, and left the building.

But he said oh, so much more, words that Israel partisans don’t want us to notice – words that we must not scrutinize.

So that sound byte “free Palestine from the river to the sea” was plucked from the speech, replayed and requoted and retweeted till we forgot that Professor Hill spoke for another roughly 19 minutes and 55 seconds.

The standard indignation was whipped up, and the smear campaign was in full swing before we could say “First Amendment.” Hill’s words were “hate-filled,”  he was branded “anti Semitism hiding in plain sight,” and of course accused of “calling for the elimination of Israel and endorsing violence.”

What else, if anything, did the man say to the United Nations General Assembly?

“While the Universal Declaration for Human Rights (UDHR) says that all people are “born free and equal in dignity and rights,” the Israeli nation state continues to restrict freedom and undermine equality for Palestinian[s].

At the current moment, there are more than 60 Israeli laws that deny Palestinians access to full citizenship rights, simply because they’re not Jewish.

“While human rights promises the right to life, liberty, and security of person, Palestinians continue to live under the threat of random violence by Israeli military and police…

“While UDHR protects us again torture and cruel and inhuman or degrading treatment or punishment, Palestinians continue to be physically and psychologically tortured by the Israeli criminal justice system…

Other examples of Israeli defiance of UDHR:

Palestinians are routinely denied due process of law.

Palestinians are convicted in over 99% of cases in Israeli military court, suggesting “that Palestinians are either more guilty than any other group in human history or that the Israeli government is unwilling or incapable of offering fair and impartial trials for Palestinians.” 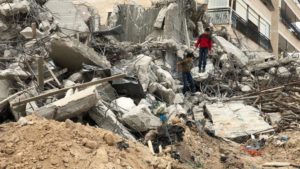 The Israeli government is “normalizing settler colonialism and its accompanying logics of denial, destruction, displacement, and death.”

For Gazans, the 11-year blockade by land, air, and sea has created the largest open-air prison in the world.

“And in the midst of it all, Prime Minister Netanyahu’s administration has become increasingly indifferent to critique, censure, or even scorn from the international community for its practices.”

Through the nation-state law, Israel has “officially rejected Arabic as an official state language…[and] described settlement expansion, both inside and outside of the Green Line, as a national value…”

Hill goes on to call for strong words, but insists – rightly – that words are not enough:

“Solidarity from the international community demands that we embrace boycotts, divestment, and sanctions as a critical means by which to hold Israel accountable for its treatment of Palestinian people.

“Solidarity demands that we no longer allow politicians or political parties to remain silent on the question of Palestine.

“[W]e must recognize the right of an occupied people to defend itself. We must prioritize peace. But we must not romanticize or fetishize it. We must advocate and promote nonviolence at every opportunity, but we cannot endorse a narrow politics of respectability that shames Palestinians for resisting, for refusing to do nothing in the face of state violence and ethnic cleansing.” 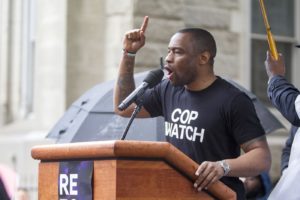 In its continued program of shutting down criticism of Israel, Hill’s alleged apology was highly publicized. Not only is it humiliating to have to apologize, but it teaches a lesson to anyone out there who is has something negative to say about the Jewish State.

But did he really apologize? Again, examine his words.

“Throughout my speech, I spoke explicitly about the need for Israeli political reform, specifically as it pertains to Arab citizens of Israel. I also called for a redrawing of borders to the pre-1967 lines, as well as a greater attention to human rights for those living in the West Bank and Gaza. At the time, I believed that these demands made in the speech sufficiently reflected my belief in radical change within Israel, not a desire for its destruction,” he wrote.  “Clearly, they did not.”

“I take seriously the voices of so many Jewish brothers and sisters, who have interpreted my remarks as a call to or endorsement of violence. Rather than hearing a political solution, many heard a dog-whistle that conjured a long and deep history of violence against Jewish people. Although this was the furthest thing from my intent, those particular words clearly caused confusion, anger, fear, and other forms of harm. For that, I am deeply sorry,” (emphasis added) he wrote.

Hill also noted that he has called for a rejection anti-Semitism in any form, including preventing physical violence against Jews,  as well as anti-Semitic images.

Nope, Hill did not apologize for what he said. He stood by his words. He expressed disappointment for the confusion, anger, and fear on the part of listeners.

Marc Lamont Hill has long been a solid, outspoken advocate of justice for Palestinians. He knew exactly what he was doing in the UN last week: he was bringing that topic out of the corner and onto center stage.

So let’s talk about justice for Palestinians, not about Israel partisans’ inability to handle legitimate criticism.

Marc Lamont Hill is the author of several books:

Nobody: Casualties of America’s War on the Vulnerable, from Ferguson to Flint and Beyond. Simon and Schuster; The Classroom and The Cell: Conversations on Black Life in America. Third World Press (with Mumia Abu-Jamal); Beats, Rhymes, and Classroom Life: Hip-Hop Pedagogy and the Politics of Identity. Teachers College Press; and Media, Learning, and Sites of Possibility (New Literacies and Digital Epistemologies). Peter Lang Publishing.

RELATED READING:
Gideon Levy Tells It Like It Is: “In U.S. Media, Israel Is Untouchable”

NBC misses truth by a mile