You Are Here: Home → The first day of school in Palestine is unlike any other

The first day of school in Palestine is unlike any other 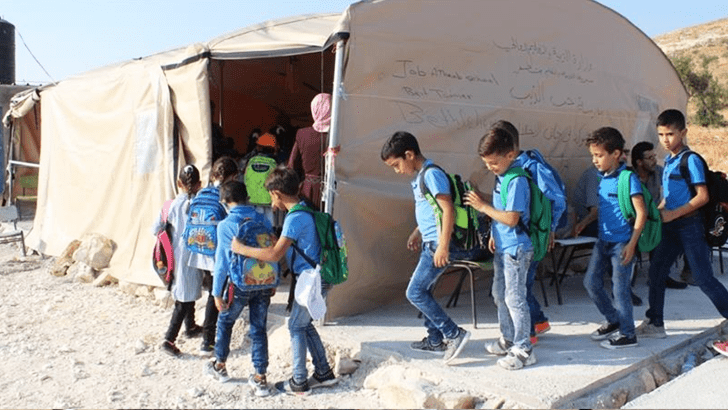 Imagine that you walk to school only to find that there is no school building anymore. This is a situation that many American children would never imagine, but in the West Bank, it is a reminder of a hostile and violent occupation.

This is exactly what happened in Jubbet adh-Dibh, a village in the West Bank where the community had raised a new primary school in the summer, only for teachers to see it leveled in the early hours of the first day of classes with no note or warning. This has left students to study in tents and outside in the blistering heat.

Despite decades of Palestinians desire for self-determination, Israel persists in its occupation of the West Bank and in its control over Gaza. This means that Israel has control over the planning and usage of Palestinian lands and will bulldoze and destroy Palestinian homes, offices, and schools at leisure, despite international condemnation.

But the destruction of school buildings is not the only issue with occupation and the start of classes in the region. It is also the walk to school. In many towns in the West Bank, children face barbed wire, Israeli Defense Force (IDF) soldiers, tear gas, rubber bullets, and sound bombs.

An urban legend says that if you send your child to school with an onion, it will counter the effects of tear gas.

Frequently, soldiers will round-up children of all ages and take them into custody. The Defense of Children International- Palestine has shown that the majority of Palestinian children taken into IDF custody are accused of throwing rocks.

Feryal Abu Farah, a school administrator in Tuqu village outside of Bethlehem, told Aljazeera that the situation worsens for high schoolers:

When they detain the older kids, it is something serious. They don’t take them for a few hours and let them go, like with our kids. The high schoolers are less frightened, though; they have experienced this violent action their whole lives. They think it’s normal.

While the West Bank experiences occupation in this direct way, Hadeel Hamza, an immigrant from Gaza, says that “the start of school brings to mind other issues. “Gazan students go to public schools that are built and ran by either the Palestinian Authority (PA) or the United Nations Relief and Works Agency for Palestinian Refugees (UNRWA). In both systems education is free; however, families need to pay for uniforms, stationery and other expenses the students might need”.

Hamza states that the curriculum taught in Gaza schools is heavily regulated by the Israeli and United States governments and that funding for safety precautions is low:

Every couple of years or a few years, an Israeli war is launched in the area. Schools close for students to host families which have to flee their homes and many schools are bombed, too. When they open again, students go to classrooms that are burnt, have no walls or, at least, a hole in the wall and with broken glass windows.

The start of a new school year should be exciting. A brand new, fresh start. The United Nations Declaration of Human Rights states that “Education shall be directed to the full development of the human personality and to the strengthening of respect for human rights and fundamental freedoms.” This gives us all hope that finally, next year, freedom and human rights will be observed in a more direct way for the next generation of Palestinian school children.

*Names have been altered to protect the safety of those interviewed in the above article.