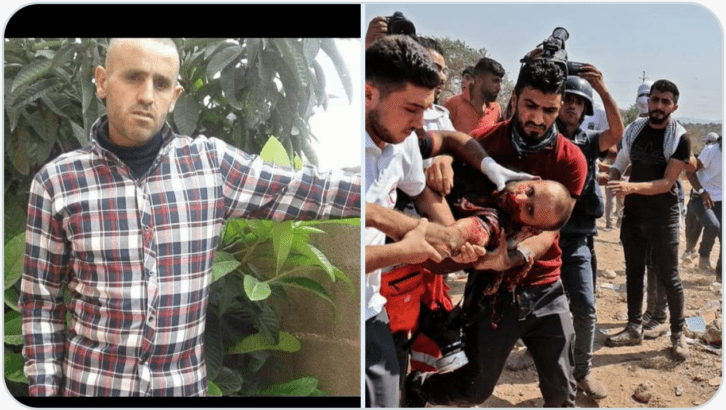 Imad Dweikat. Photo on right is from AFP (https://iakn.us/Dweikat) (Twitter)

Imad Dweikat had been shot with ‘a live bullet to the chest’ in Beita, the health ministry says. He’s the 8th Palestinian killed by the IDF in a little over a month.

Israeli troops have shot dead a Palestinian and injured others during a protest against illegal Israeli settlements in the occupied West Bank, the Palestinian health ministry and medics have said.

Imad Ali Mohammad Dweikat, 38 [also reported at 37], was shot by “a live bullet to the chest” in the town of Beita and was pronounced dead at the hospital in nearby Nablus, the ministry said in a statement on Friday. [His name is also sometimes spelled ‘Emad.]

The Israeli military said on Friday that 700 Palestinians had gathered south of the Palestinian city of Nablus, burning tyres and throwing rocks and petrol bombs towards troops and border police.

Israeli forces “responded with riot dispersal means”, the military said in a statement. “We are aware of reports that a Palestinian was killed and a number of Palestinians were injured.”

The Palestine Red Crescent ambulance service said 21 other Palestinians had been shot by Israeli troops, most of them with rubber-tipped bullets. Others were treated for tear gas inhalation, it said in a statement.

Last Friday, some 270 Palestinians were wounded in confrontations with Israeli troops during protests in Beita and during the funeral of a young Palestinian killed the day before, the Palestinian Red Crescent reported.

On July 23, 320 Palestinians were wounded or suffered from tear gas inhalation in confrontations with Israeli forces in Beita, medics said. A teenager shot by Israeli forces later died of his wounds.

The occupied West Bank is among territories where Palestinians seek statehood. Violence has simmered there since the United States-sponsored talks between the Palestinians and Israel broke down in 2014.

Palestinians have staged near-daily protests in Beita, south of Nablus, to voice anger at a nearby illegal Israeli settler outpost.

The settlers agreed to leave the outpost in July under an agreement with Israeli Prime Minister Naftali Bennett, following weeks of demonstrations by Palestinians lighting fires that often engulfed the outpost in smoke.

But some of the outpost’s buildings remained, locked and under military guard. Palestinians, who claim the land the outpost is on, have decided to continue their demonstrations.

Israel occupied the West Bank during the 1967 Six-Day War and all Jewish settlements there are considered illegal by most of the international community.

Almost half a million people live in illegal Israeli settlements in the occupied West Bank, alongside 2.8 million Palestinians.

[Editor’s note:  Dwikat is the eighth unarmed Palestinian civilian to be killed by Israeli forces in a little over a month, including a child and a teen; no Israelis were killed during this time. For a list of Palestinians and Israelis killed since 2000 see this Timeline.

On July 28th, the House of Representatives voted to give Israel billions of Americans’ dollars; the bill now goes to the Senate.

Go here to tell your Congress member to oppose this massive funding to Israel.]