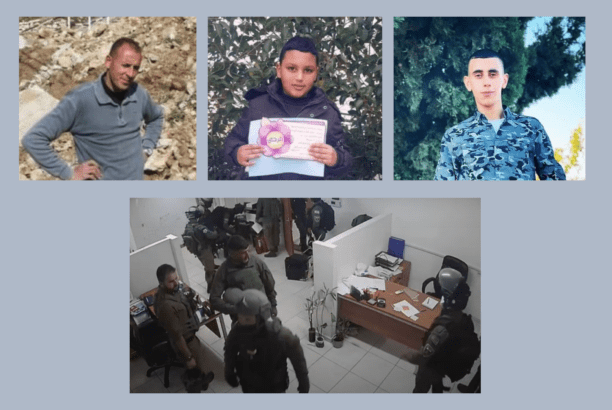 Israeli forces are on another killing spree.

On Wednesday, Mohammad, the 11th Palestinian child victim of Israel in the West Bank in 2021, was killed when Israeli forces opened fire on the car he was riding in with family members (Mohammad’s age is reported at between 11 and 13.)

A few days before, Israeli forces had killed a 17-year-old, shooting him in the back.

Today, Shawkat, age 20, participated in Mohammad’s funeral march, where he too was shot to death by Israeli forces.

And on Tuesday, Israeli forces killed a 41-year-old Palestinian man.

These incidents occurred under the shadow of an International Criminal Court investigation and a United Nations call for an investigation into possible Israeli war crimes.

(In the middle of all this, Democrats in the House of Representatives passed legislation to give Israel billions of Americans’ tax dollars)

Read the reports below:

Mohammad Mo’ayyad Bahjat Abu Sara, 11, was shot and killed by Israeli forces around 3 p.m. as he sat in his father’s car near the entrance to the town of Beit Ummar located north of Hebron, according to information collected by Defense for Children International – Palestine. Mohammad sustained a gunshot wound to the chest, causing bleeding in his lungs. He was pronounced dead around 8 p.m.

Six Israeli soldiers deployed near the road that connects Route 60 to Beit Ummar shouted at Mohammad’s father, Mo’ayyad, to stop his car and then subsequently fired upon it, according to information gathered by DCIP. The vehicle was approximately 50 meters (165 feet) from Israeli forces when Mohammad was shot and at least 13 bullets were fired at the car, according to an eyewitness.

Israeli forces shot and killed 11-year-old Mohammad Mo’ayyad Bahjat Abu Sara today near Beit Ummar north of Hebron in the occupied West Bank. Mohammad was shot while sitting in the back of his father's car and was pronounced dead after surgery at Al-Ahli hospital in Hebron. pic.twitter.com/gU9NsjN8VA

The killing occurred near an Israeli military watchtower located near Route 60 at the entrance to Beit Ummar, a town 8 miles (13 km) north of Hebron in the southern occupied West Bank.

After the shooting, Mohammad’s father drove him to the Red Crescent in Beit Ummar. He was subsequently transferred to Al-Ahli hospital in Hebron where he underwent surgery. Following the surgery, Mohammad was placed in the intensive care unit, and he succumbed to his injuries around 8 p.m., according to information collected by DCIP.

Mohammad is the 11th Palestinian child shot and killed by Israeli forces in the occupied West Bank since the beginning of 2021. Israeli forces shot Mohammad Munir Mohammad Tamimi, 17, in the back on July 24. Mohammad underwent surgery at Salfit governmental hospital but succumbed to his wounds later that evening.

A Palestinian man was killed Thursday by Israeli army gunfire in the occupied West Bank, during the funeral of a Palestinian boy, Palestinian officials said.

“Shawkat Khalid Awad, 20, died of gunshot wounds to the head and stomach in Beit Ummar,” the Palestinian health ministry said.

Israeli soldiers fired tear gas, rubber-coated bullets and stun grenades at Palestinians attending the funeral of Mohammed al-Alami, 12, a Palestinian boy killed the day before in the occupied West Bank.

Alami died on Wednesday after being shot by Israeli soldiers while traveling in a car with his father in the occupied West Bank town of Beit Ummar northwest of Hebron, Palestinian authorities said.

On Thursday a procession followed the boy’s body, draped in the flag of Fatah, Palestinian President Mahmoud Abbas’s party, through the streets of Beit Ummar, where he was buried.

Israeli troops shot and killed a 20-year-old Palestinian man, Palestinian health officials said. The Palestinian Health Ministry said the man, identified as Shaukat Awad, was shot in the head and abdomen during the confrontations in Beit Ummar.

They killed him. Khaled is dead. Khaled is 20yo.
Went to say goodbye to the dead. He joined them.

Videos shared on social media showed the town’s streets trashed with debris and stones following the confrontations between Palestinians and Israeli forces.

Nasri Sabarneh, mayor of the town, said on Wednesday that the father was driving with his son and daughter when Mohammed asked him to stop at a shop to buy something.

The father made a U-turn, the mayor said, and Israeli troops nearby began shouting at him to stop. A soldier then opened fire at the vehicle, fatally shooting the boy in the chest.

Sabarneh said he knows the family, who lives in town, and had spoken to the father. The father and daughter were not hurt, he said.

“They took my heart from me, they snatched it from me,” the boy’s father told Haaretz.

The Israeli army said they are investigating the killing of the minor. [NOTE: Israel’s “investigations” have proven time and again to be little more than lies and whitewashing.]

Earlier, the Israeli army said that its soldiers had noticed men getting out of a vehicle and digging in the ground near Beit Ummar checkpoint before leaving. Upon checking the area, the soldiers found two bags, one of which contained the body of a newborn child, it said in a statement.

The soldiers had later spotted the vehicle again and attempted to stop it using standard procedures, including shouting and firing warning shots into the air.

“After the vehicle did not stop, one of the soldiers fired towards the vehicle’s wheels in order to stop it,” the army said.

“We are looking into the claim that a Palestinian minor was killed as a result of the gunfire,” it said, adding the incident was being reviewed by senior commanding officers.

Alami was the second young Palestinian killed by Israeli fire in days, after 17-year-old Mohammed Munir al-Tamimi died on Saturday of gunshot wounds suffered the day before in the Palestinian village of Beita.

And late on Tuesday, a 41-year-old Palestinian was shot dead, also near Beita, the Palestinian health ministry said.

All Jewish settlements in the West Bank are regarded as illegal by most of the international community.

Israeli paramilitary border police forces raided DCIP’s headquarters located in Al-Bireh’s Sateh Marhaba neighborhood, located just south of Ramallah around 5:15 a.m. on July 29. More than a dozen Israeli soldiers forced open the office’s locked front door and confiscated six desktop computers, two laptops, hard drives, and client files related to Palestinian child detainees represented by DCIP’s lawyers in Israel’s military courts. No documents were left in the office to give any indication of the reason for the raid, and they did not leave behind any receipt of materials seized.

BREAKING: Israeli forces raided our main office in Al-Bireh today around 5 a.m., confiscating computers, laptops, and files concerning our Palestinian child detainee clients in the Israeli military courts. We were not informed of the reason for the raid. pic.twitter.com/IE9i4ZDvfP

Video surveillance footage from inside the DCIP office shows Israeli forces entering the premises at 5:15 a.m. The Israeli soldiers move through the DCIP office gathering computers, laptops, and files, and then cut the closed-circuit television camera feed at 5:27 a.m.

Israeli soldiers shot and killed, on Tuesday evening, a Palestinian man near Beita Junction, south of the northern West Bank city of Nablus. The incident led to protests before the soldiers injured at least 49 Palestinians.

Palestinian sources said the man, Shadi Omar Lutfi Salim, 41, was shot after the soldiers ambushed him at the junction of the town and fired live rounds at him.

They added that the soldiers took the seriously wounded Palestinian away, before declaring that he died from his wounds.

Eyewitnesses said the soldiers were hiding in an olive orchard near the road when they ambushed the man and opened fire at him.

Abdul-Mon’em Issa, a member of Beit Town Council, said Salim has been working as a water technician for 17 years, and recently became an advisor to the council due to his vast experience in water resources and management.

He added that Salim was at the main entrance of the town, trying to unlock the valve of the main water pipeline leading to the village, especially since the Israeli army frequently closes it, depriving more than 15.000 Palestinians of the needed water resources, approximated at 1300 Cubic/Meters.

Issa stated that, according to eyewitnesses in the area, the soldiers fired more than twelve live rounds at the Shadi without a warning.

“An important part of Shadi’s job was to ensure the Palestinians in the town have the needed water, especially since Israel keeps closing the water supplies to direct them to the illegal colonialist settlers in the area,” Issa added, “One of Israel’s ongoing crimes and violations, is depriving the Palestinians of the needed water resources, especially in the summer.”

It is worth mentioning that the soldiers also ambushed and abducted four young men, near Sbeih mountain, and took them to their military post on its top.

The soldiers also fired gas bombs and rubber-coated steel bullets at Palestinians in Beita town park, near Sbeih Mountain, after stopping dozens of residents and cars and forcing them to leave the area.

The attacks led to protests in the area before the soldiers shot and injured 49 Palestinians on Sbeih Mountain near Beita.

Ahmad Jibril, the head of the Emergency Department at the Palestinian Red Crescent Society (PRCS) in Nablus, said the soldiers injured 49 Palestinians, including one, identified as Taha Hamayel, 24, who was shot with a live round in the leg and a rubber-coated steel bullet in the head.

Medics rushed Hamayel to a hospital in Nablus; his condition was described as serious but stable.

Jibril added that most of the injured Palestinians suffered the effects of tear gas inhalation and received the needed treatment at the scene.