You Are Here: Home → Israel is hiding the truth about the killing of Ahmad Erekat

Israel is hiding the truth about the killing of Ahmad Erekat 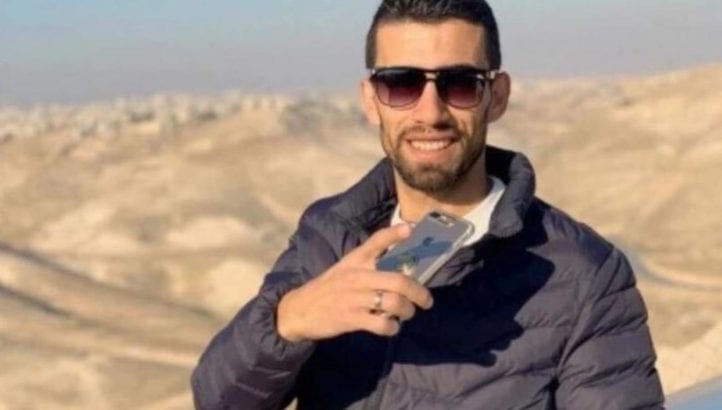 Ahmad Erekat was killed at an Israeli checkpoint on his sister’s wedding day last year.

Again, the official story of a Palestinian ‘terror attack’ crumbles upon closer inspection of video footage. Ahmad Erekat has died; Israel is covering up.

Once again, video footage reveals that Israel’s account of a Palestinian “terror attack” bears no relationship to what actually happened.

Not only did Israel dissemble about the circumstances in which its soldiers shot dead 26-year-old Ahmad Erekat last June, but it is still inflicting appalling suffering on his family eight months later based on those lies.

A new forensic investigation discredits Israel’s claim that Erekat used his car to launch a ramming attack on a military checkpoint near Bethlehem. It finds that the collision was more likely an accident.

Nonetheless, Israel is still refusing to hand Erekat’s body back to his parents for burial. There is no end to what amounts to his family’s psychological torture, so long as Israel insists on holding the bodies of Erekat and some 70 other Palestinians to use as bargaining chips in potential future negotiations with Hamas.

Erekat was shot six times by soldiers on 23 June. He had been driving through the occupied West Bank to complete errands on his sister’s wedding day, on what should have been a simple journey. But more than five decades of Israel’s belligerent – and seemingly permanent – occupation have created an obstacle course of checkpoints and traffic holdups that Erekat had to negotiate.

By mid-afternoon, he arrived at the large “Container” checkpoint, one of many Israel has built to permanently divide up the West Bank. The purpose of these checkpoints is to limit Palestinian movement and thereby help Jews living in Israel’s illegal settlements to seize more Palestinian territory for themselves. In that sense, the checkpoints are integral to Israel’s decades-long effort to stop a Palestinian state from ever being born.

Erekat’s killing was widely reported in both Israeli and international media, in part because he was a nephew of Saeb Erekat, a prominent Palestinian spokesperson until his own death late last year of complications related to Covid-19.

In reporting Ahmad Erekat’s killing, most media faithfully echoed Israel’s official line. He had rammed his car into the checkpoint in a “terror attack” that lightly injured a soldier. He was then fatally shot – or “neutralised” – when he emerged from his car to attack other soldiers.

None of this fitted with what was known even then. But Israel refused to conduct an investigation that risked clearing Erekat’s name. Witnesses were not interviewed and the the car was not checked for malfunctions.

Israel, however, has found it harder than usual to put Ahmad Erekat’s killing in the rearview. As is often the case, Palestinians who witnessed the incident disputed the Israeli army’s account of an attack. Video from other drivers’ phones suggested that Erekat had been denied medical attention and left to bleed to death on the side of the road.

But more significantly, Saeb Erekat intervened to deny that his nephew was carrying out an attack, and accused the soldiers of executing him “in cold blood”.

Israel often refuses to release footage of these all-too-frequent checkpoint deaths. That alone should raise suspicions that in many cases, Israeli soldiers are not defending themselves – as the army claims – but carrying out extrajudicial executions when something, anything, takes them by surprise.

Trigger-happy soldiers shoot first, and the army barely bothers to ask questions later – both because Palestinian lives are considered cheap and because soldiers know they are operating in a system with no accountability. Impunity is what happens when a belligerent occupation becomes permanent rule by a master class over a serf class.

But in this case, with international pressure building, Israeli officials issued footage from one of the checkpoint’s cameras, assuming it would quiet the criticism. They were wrong.

The problem for Israel is that today’s digital tools mean experts can reconstruct events in astonishing detail from even limited video.

The footage was studied by Forensic Architecture, a research group based at the University of London and headed by British Israeli academic Eyal Weizman. The team was able to create a three-dimensional reconstruction of that afternoon’s events.

To the untrained eye, the footage appears to show Erekat’s car accelerating as it swerves towards a concrete blast wall protecting soldiers. But as experts found, that was an optical illusion caused by changing perspective as the car altered direction.

Forensic Architecture’s experts show that the car continued at roughly 15km per hour throughout. Had Erekat wished to, he could have driven the car much harder and faster into the checkpoint than he did.

Jeremy Bauer, a US collision expert who was part of the team, said the movement of the wheels suggests that Erekat might have tried to brake during the swerve.

Many Israelis, of course, ignored this expert analysis and maintained last week that the incident was still a car-ramming. But they studiously avoided discussing the even more damning second and third parts of Forensic Architecture’s analysis.

In other words, whether or not Erekat carried out a car-ramming – and the evidence suggests he did not – soldiers shot him even though he posed no threat. The team also found that, after the crash, Erekat got out of the car and stood in near-paralysis four metres from them, apparently terrified he would be shot.

Almost instantly, he was hit by three bullets fired in quick succession, even as he raised his arms and moved backwards. Three more rounds were fired into him as he lay wounded on the ground.

In Israeli military parlance, the soldiers “confirmed the kill”. They followed an unwritten army code that allows them to carry out an extrajudicial execution of any Palestinian they have unilaterally decided is a “terrorist”.

It was exactly the same logic that dictated what happened next. In the third part of the analysis, Forensic Architecture noted that an Israeli medical team arrived within 10 minutes. They left Ahmad Erekat to bleed to death, even though footage from a driver’s phone showed him moving his arm after he was shot.

At the time, Israeli officials claimed that Erekat was given medical attention “within minutes”, but that it was determined he was dead. The truth is that Israeli paramedics attended solely to the lightly injured soldier, while a Palestinian ambulance was denied access to Erekat.

In the video footage, an Israeli soldier can be seen wandering past Erekat’s head shortly after he was shot, but the soldier offered no assistance. The Forensic Architecture report points out that the denial of medical assistance to Palestinians is an established practice of “killing by time” – a bureaucratic version of “confirming the kill”.

Erekat was left for around two hours on the ground. At some point his body was stripped of its clothes and, the report observes, he could be seen naked, surrounded by around 20 Israeli soldiers and police. How his family must feel about this additional indignity one can only imagine.

But even this degrading treatment pales in comparison to the fact that his parents have been denied access to their son’s body and the right to bury him ever since.

Erekat’s corpse – like those of 70 other Palestinians assumed to be “terrorists” – has been effectively kidnapped by the Israeli state and held as a bargaining chip.

There is nothing exceptional about Israel’s treatment of Ahmad Erekat. An earlier investigation by Forensic Architecture exposed almost identical lies justifying an extrajudicial execution in 2017 by police inside Israel of another Palestinian man – this one nominally an Israeli citizen.

Fed by a similar culture of racism to the army’s, Israeli police shot Yacoub Abu al-Qiyan, a teacher, as he was driving down a hillside track in his Negev village. Badly injured, he lost control of the vehicle and hit and killed a police officer. In seeming revenge, Abu al-Qiyan was left to bleed to death for half an hour as police and medics milled around nearby.

Even more notoriously, a video from 2016 shows an Israeli army medic, Elor Azaria, shooting a wounded Palestinian man in the head at close range as the man lies on the street in the occupied Palestinian city of Hebron.

And last May, an unarmed, autistic Palestinian man, Iyad al-Halak, was shot seven times at close range by Israeli police as he lay on the ground, and while one of his teachers begged the officers not to harm him. Afterwards, Israel claimed that all the cameras at the site of his shooting in Jerusalem’s Old City were malfunctioning.

A joint statement from the government, army and Shin Bet intelligence service still falsely claimed that Erekat moved “quickly towards Border Police fighters while waving his hands in a manner taken as threatening”, adding that the soldiers “were certain that they were in immediate mortal danger”.

In Israel’s security worldview, even a Palestinian raising his hands in surrender proves only his “terrorist” intent.

It is important to remember that last summer, in the days preceding Erekat’s execution, the Israeli army had braced for what it assumed would be a wave of “terror attacks” that ultimately failed to materialise. The military expected retaliation after Israeli Prime Minister Benjamin Netanyahu announced Israel’s intent to annex swaths of the West Bank, in violation of international law.

The truth is that Erekat died not only because Israeli soldiers misread his intentions. He died because those same soldiers – like their military commanders and political leaders – live with the repressed knowledge that their presence on another people’s land, and their efforts to displace those people by force, can never be accepted.

Ahmad Erekat was killed on his sister’s wedding day, and his body and his family continue to be abused to this day, so that Israel can avoid confronting what the occupation necessarily entails. He paid the price with his life so that Israelis can avoid facing that dark secret.

Jonathan Cook, a British journalist based in Nazareth since 2001, is the the author of three books on the Israeli-Palestinian conflict. He is a past winner of the Martha Gellhorn Special Prize for Journalism. His website and blog can be found at: www.jonathan-cook.net
ESSENTIAL READING:
RELATED READING:
VIDEOS: