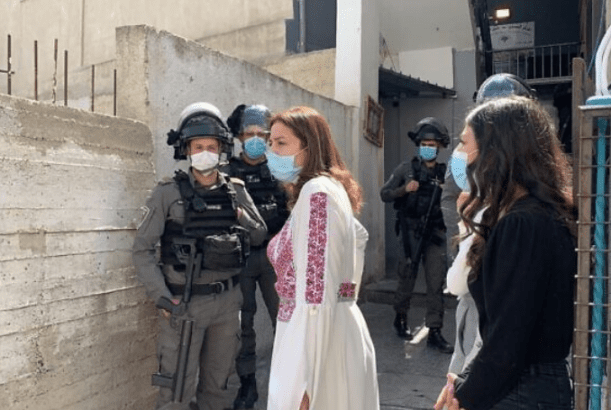 Israeli soldiers arrested the Palestinian head of a Jerusalem Women’s Center and a clothes designer in a raid on an exhibition of traditional Palestinian clothes and objects made by women.

reposted from the Palestine Chronicle, March 8, 2021

NOTE: Israel Police claim this event, an exhibition of traditional Palestinian clothes and objects made by women, was illegal because –according to the Times of Israel – it was “a Palestinian Authority event…Israel banned the Palestinian Authority from carrying out official business in East Jerusalem in 2001, in accordance with the 1995 Israeli-Palestinian Interim Agreement on the West Bank and the Gaza Strip that prohibits the PA from operating in Israeli territory.”

Significantly, while Israel claims to have annexed East Jerusalem, Palestinians and most countries of the world do not recognize it as Israeli territory. The US has only recognized it since December 2017.

Sabreen al-Syad, one of the event’s organizers, told Falasteen Online that a unit in the Israeli army had arrested the director of At-Tur Women Center, Ikhlas al-Syad, and fashion designer Manal Abu Spaitan while raiding and assaulting participants in a cultural event that celebrates the achievement of women.

Today, on International Women’s Day, Israeli police have raided a women’s center in Jerusalem so as to prevent an event on Palestinian Heritage.

Even on International Women’s Day, the attacks on Palestinian women by the Israeli state do not stop. pic.twitter.com/EjmYnkOpv7

According to the Palestinian news website, the event was organized jointly by the Olive Mountain Club and the At-Tur Women Center. Aside from the destruction and arrests, Israeli soldiers reportedly confiscated valuable items, including women’s thobes (traditional embroidered dresses).

“According to human rights organizations, the Israeli occupation currently imprisons 35 women, including 11 from the Jerusalem area. They include Shruq Dwiat, which has been sentenced to 16 years in prison,” Falasteen Online reported.

Also citing rights groups, the Palestine Chronicle newspaper reported on Monday that among the women prisoners, there are 11 mothers.

Additionally, five of the imprisoned women require constant medical attention as they were injured during their violent arrests.