You Are Here: Home → ‘They Choose One Person to Kill, and Then the Protest Is Over’

‘They Choose One Person to Kill, and Then the Protest Is Over’ 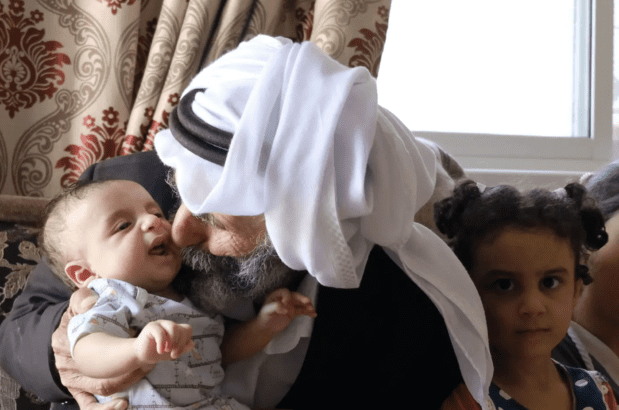 Ali Duikat, father of Imad who was killed last Friday, cradling his grandson and namesake, this week.Alex Levac

Imad Duikat was the sixth Palestinian to be shot dead by Israeli troops during recent protests against the settler outpost of Evyatar, and the 40th to be killed in the West Bank since May.

by Gideon Levy and Alex Levac, reposted from Ha’aretz, August 12, 2021

Ali is carried into the room in the arms of Uncle Bilal, his father’s brother. Everyone falls silent, some eyes fill with tears at the sight of the little baby. Ali is not yet two months old – and his father was killed last Friday by the Israel Defense Forces. A single bullet was fired at him and struck his chest from a distance of a few hundred meters.

Imad Duikat, a simple laborer, had been among hundreds of fellow inhabitants of the West Bank village of Beita, who every Friday gather across from Evyatar, an illegal outpost whose settlers have left for the time being but whose dwellings are still there, intact. Village leaders insist that they will not rest until the last stone is removed from Evyatar, and the land – which they say belongs to Beita and three other nearby villages – is restored to its owners.

Duikat, 38, was drinking water from a disposable cup in the midday heat when he was shot. The cup now lies at the center of the improvised memorial – a circle of stones – that his friends have placed around the dried bloodstain where the bullet slammed into him. His infant son Ali, and his four sisters, will never see him again. Imad’s grandfather, also named Ali, presses his little grandson to his heart and gives him a kiss.

This simple home, lying deep inside Beita, is steeped in mourning. We arrived there early this week to visit Imad’s father, brother, children and other relatives. The grieving women were on the first floor. A group of local men had gathered to console each other in a hall in the center of the village.

Last week we were in Beita, too: to document the killing of the local plumber, Shadi Shurafi, a 41-year-old father of four, earlier this month. He was shot and killed one evening when he went to check the village’s main water valves, near the highway, while holding a wrench. (On Tuesday this week the IDF Spokesperson’s Unit informed us that Shurafi’s body had finally been returned to his family for burial at the directive of Israeli politicians.)

The ink was hardly dry on the article about the plumber that appeared in these pages last Friday, when yet another resident of Beita was killed. Duikat is the sixth villager to have been killed since the start of the demonstrations against Evyatar. Since May, in the West Bank, Israeli forces have killed a total of 40 Palestinians – most of whom were apparently not endangering a soul.

The widow, Samar, is closeted in her room. Her fatherless daughters, ranging in age from 10 to 4, are sitting mutely on the sofa. Grandpa Ali, 78, grieving over his son, is wearing a white keffiyeh and a dark suit; he chortles occasionally, unwittingly, apparently in discomfiture.

Since Evyatar was established on Jabal Sabih, on the outskirts of Beita, in early May, villagers have conducted their Friday prayers on the hill of olive trees across the way. It’s become a popular weekly ritual: The whole village, children included, makes its way on foot or by car to the hill, vans bring in food and drinks, and locals spend the afternoon, after the prayers, opposite the Evyatar eyesore. During the period when the outpost was inhabited, locals set tires ablaze here and the dense smoke wafted over and disturbed the settlers.

A huge flag of Palestine now flaps defiantly in the breeze; loudspeakers and lighting have been set up here too. Also last Friday the villagers gathered on this same hill: Estimates are that between 1,000 and 1,500 people showed up for the protest, which was also a sort of mass picnic with children.

Beita has had plenty of experience mounting protests against violent settlers who want to dispossess them. A year and a half ago, settlers tried to strike down roots on nearby Jabal Orma; that attempt was scuttled in a struggle that took the lives of two villagers. During the holiday of Passover in 1988, a provocative hike by young settlers in the area turned into a violent and fatal incident; in its wake, the IDF demolished 16 homes in Beita. In 1991 a settler from Elon Moreh murdered a local resident and was committed to a mental hospital. Two weeks ago the plumber was killed. And then it was Duikat’s turn.

He had been home early last Friday with Samar and their children. At around 10:30 he left the house with his 20-year-old nephew Rabia. They drove to the hill opposite Evyatar, passing a recreational and camping area for families on the way. The villagers had laid rugs on the ground and began their regular midday prayers, between the olive trees, under the sun. The empty structures of Evyatar loomed on the hill opposite, among them a large menorah-shaped structure, watchtowers and Israeli flags.

It was about 2:30 P.M. after hundreds had gathered when an IDF soldier took up his rifle and fired just one round – a .22 caliber “tutu” bullet, according to the villagers – into Duikat’s chest. Blood spurted out of his mouth; the bullet did not exit. He was pronounced dead on arrival at Rafadiya Hospital in Nablus. The ambulance that took him there had been parked a few steps away from where he was killed; a second ambulance was parked nearby. At least two ambulances wait at these weekly demonstrations, which invariably end in bloodshed.

Last Friday, six local residents were hit by live fire and more than 100 were injured by tear gas and rubber-tipped metal bullets. No one knows how many troops were deployed against them; the terrain is rocky and some of the soldiers are hidden. Some protesters say they were also fired at from drones that hovered above.

So it goes here, every week.

“They weren’t necessarily aiming at Imad [personally],” says Omar Duikat, 51, an uncle of the deceased, sitting in the family home. “They choose one person and then it’s over. The soldier chooses whom to kill. That’s how we’ve had six local people killed.”

Bilal, 44, the victim’s older brother, hugs his little nephew, baby Ali. “They finished him off in one second,” he says, then falls silent.

Adds Omar: “His life was very simple. Imad wasn’t a soccer player, he wasn’t a movie actor or a singer or a merchant. Goes to work in the morning as a laborer, comes home to his wife and children, and sometimes goes out to work in his olive grove with the family.

“The settlers around us are not human beings”

“The settlers don’t come to visit,” he continues. “They want to take over the land. I have nothing against the Israeli people. I work in Rishon Letzion, and hats off to the people there, but the settlers are very different. The settlers around us are not human beings. All they ever think about is how to do bad things to people, and the problem is that the army supports them. Imad is the price we pay to safeguard our land. We in this village are paying a very steep price to preserve our land. This village is not willing to accept the settlers. We are ready to pay any price in order not to lose our land. We want peace, but we are not willing to let anyone hurt us.

“The settlers are only waiting for a chance to get a foothold, erect a flag, install a mobile home and expand even more – but we do not agree to accept that. We decided 105 days ago, when they settled on the hill across the way,” Omar explains, “that this will not end until the land is returned to us. It was not Evyatar, it is not Evyatar and it will never be Evyatar. It’s exactly the center of the country, and they want to split the east from the west and the north from the south. Our struggle will continue until they remove the last stone.”

The following response regarding the incident that took Imad Duikat’s life came from the IDF Spokesperson’s Office, this week: “The IDF carries out debriefings with the aim of drawing conclusions in order to enable it both to cope with security risks and to avoid, as far as possible, harming noncombatants. On August 6, 2021, a violent disturbance took place in the vicinity of ‘Evyatar Hill’ with the participation of hundreds of Palestinians who threw stones and set tires on fire. In the wake of the incident in question, a Military Police investigation is underway, and upon its conclusion the findings will be conveyed to the office of the military advocate general.”

[NOTE: Israeli investigations into abuses against Palestinians are widely known to serve no other purpose than to create an “illusion of inquiry.” Read B’tselem: Israeli “investigations” whitewash, perpetuate killing in Gaza or watch Israeli whitewashing & absurd punishment are not exceptions. They are policy.for details.]

Border Police officers are stationed at the entrance to Evyatar. The area where the Beita villagers mount their protests is strewn with remnants of scorched tires and IDF shell casings; a sea of plastic bottles and cups covers the dry ground. Crickets chirp there at midday, the only sound that’s heard – until the next demonstration and the next killing.

If you want to do something about the human rights abuses against Palestinians, contact those who send our money to Israel and tell them NO MORE.