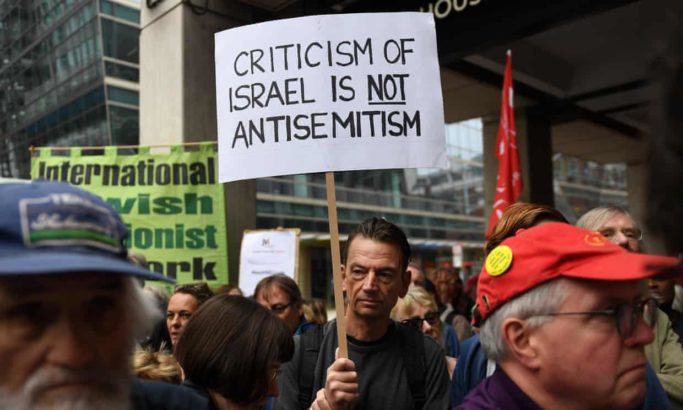 Protesters outside the Labour party headquarters in London, Sept. 2018

A new, “improved” definition of antisemitism still fails to acknowledge the history of Palestinian dispossession, preferring to focus on Israeli Jews’ desire to just live their lives, liberated from any obligation to provide Palestinians with actual equality or dignity.

The Jerusalem Declaration on Anti-Semitism (JDA) was released in March as a progressive variant of the International Holocaust Remembrance Alliance (IHRA) “working definition” of anti-Semitism – a definition that, despite its wide acceptance, is deeply problematic.

Progressives agree that JDA is a huge improvement over IHRA. JDA acknowledges that support for the Palestinian cause is “not on the face of it” antisemitic; it also leaves room for opposition to Zionism, criticism of Israel (including use of the word “apartheid,” or a “double standard” framing), and even the BDS (boycott, divest, and sanction) movement.

But while it makes these allowances, the parameters the Jerusalem Declaration sets for that debate leave much to be desired. Many Palestinian individuals and organizations and others have published objections, some of which are referenced below (specifically, Mark Mohannad Ayyesh, writing for Al Jazeera news network, and Samer Abdelnour, writing for Al Shabaka Palestinian Policy Network.

Proponents of justice and racial equality would do well to remember that while anti-Semitism has its victims, Zionism in the last half century arguably has had more – in 2002 Israeli author Israel Shahak wrote: “In the last 40 years the number of non-Jews killed by Jews is by far greater than the number of the Jews killed by non-Jews.” Yet Palestinians are not invited to participate in mainstream dialogue about the state that was built on land stolen from them.

Two of the most common objections to the JDA definition of anti-Semitism have to do with “Palestinian hostility” toward Israel and Jews’ right to exist in Israel as equals (presumably equal to Palestinians).

In judging whether an action is anti-Semitic, the JDA authors rightly remind readers to be context-conscious. The Preamble to the Jerusalem Declaration states:

Context can include the intention behind an utterance, or a pattern of speech over time, or even the identity of the speaker, especially when the subject is Israel or Zionism.

So, for example, hostility to Israel could be an expression of an antisemitic animus, or it could be a reaction to a human rights violation, or it could be the emotion that a Palestinian person feels on account of their experience at the hands of the State.

At first glance, this statement may resonate with justice-seekers because it acknowledges the negative encounters that Palestinians may have had with the state – something the IHRA definition lacked. But hiding below the surface of these words is an implication that Palestinian hostility might be merely an emotional reaction to an incident of perceived misconduct.

In simple terms, JDA seems to recommend that Palestinian outrage is an emotional outburst that must be tolerated: ‘It’s not antisemitism – they’re just letting off steam.’

2. Jews’ right to exist in Israel as equals

The Jerusalem Declaration offers examples of allegedly unacceptable, anti-Semitic language that are very similar to those in the IHRA definition, including:

This last item is problematic for Palestinians (and their allies) for several reasons.

To begin with, the statement does not define “equality.” In fact, “equality” in the context of apartheid and ethnic cleansing is nonsense.

The “right to exist and flourish” is not reciprocal. True equality and mutual flourishing would require the dismantling of Israeli apartheid as a starting point.

Palestinian writer Samer Abdulnour sums up his objections to the supposed antisemitic statement:

The definition discusses Jewish flourishing without any acknowledgment that since the inception of Israel until the present day, this flourishing is tied to privileges that stem from [Palestinian] dispossession and military occupation, and the denial of our collective freedom and right of return—that is, our right to exist and flourish.

Mark Muhannad Ayyash points out that the JDA document assumes as non-negotiable the idea that Jews have the right to their own Jewish state – without acknowledging that this state was founded on land inhabited by indigenous Palestinians. Ayyash asks,

So how is this “principle of equality” to be secured in a context where the Israeli state must maintain Jewish sovereignty for a Jewish majority at all costs? Are Palestinians supposed to accept that the right of Jews in the State of Israel ought to take precedence over their own sovereign rights?

The “principle of equality” was never a factor in the creation or maintenance of the state of Israel.

Ultimately, while the Jerusalem Declaration on Anti-Semitism is a step forward from the IHRA definition, it still rejects the realities of what the Jewish State has done and is still doing to the Palestinian people.