You Are Here: Home → Rally ‘against antisemitism’ held to support Israel’s actions against Gaza

Rally ‘against antisemitism’ held to support Israel’s actions against Gaza 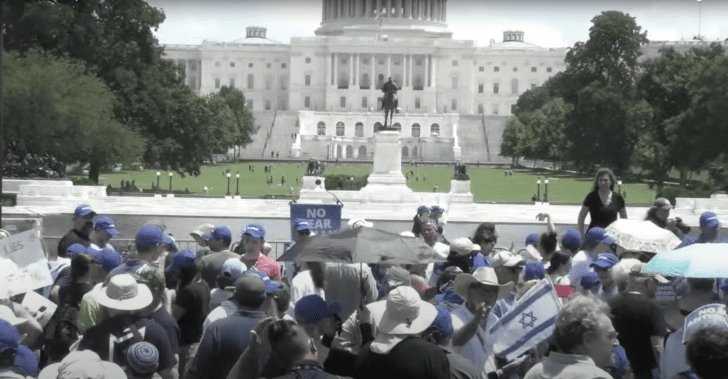 “NO FEAR: A Rally in Solidarity with the Jewish People” held in Washington DC on July 11 2021. Some participants wave Israeli flags and/or wear them draped over their shoulders. (YouTube)

The Alliance for Israel is behind today’s ‘No Fear’ rally in Washington D.C. The organizers were motivated by a desire to defend Israel against criticisms of its May violence against Palestinians. Some groups refused to participate…

The Alliance for Israel is reportedly behind today’s rally outside the U.S. Capitol in Washington, D.C. (Live rally coverage here.) Organizers of the rally “No Fear: A Rally in Solidarity with the Jewish People” were largely motivated by a desire to defend Israel over widespread criticism of the state’s recent violence against Gazans.

According to the Jewish Telegraphic Agency (JTA), one of the rally organizers “said  it was critical to make attacks on Israel, and not just antisemitism, a focus of the rally.”

Bombs were falling on our brothers and sisters in Israel, and we were being attacked on streets in New York and restaurants in Los Angeles. I made a vow to myself, the next group that raised their hands, I would call them and offer to raise funds.”

The group that approached him was a new and relatively unknown one, Alliance for Israel, founded in 2019 by Melissa Landa, a pro-Israel activist and former education professor. The group’s focus appears to be opposing the movement to boycott, divest and sanction Israel.

Landa, who declined a request for an interview, at first had only a handful of groups, mostly from the right, signing on to join the rally. Wiesel was key to recruiting mainstream Jewish groups. The organizers also brought on Steve Rabinowitz, a public relations specialist with deep experience working for Democrats, Jewish groups and progressive groups.

Now, a who’s who of establishment Jewish organizations have become cosponsors. They include all three major Jewish denominations, the Jewish Federations of North America, the Anti-Defamation League, the American Jewish Committee and the leading Republican and Democratic Jewish groups.

In addition, JTA reports that “a few famous non-Jews will be speaking, including Meghan McCain, a prominent conservative, and Derek Black, a former white supremacist.”

“The Orthodox Union, Rabbinical Assembly, United Synagogues of Conservative Judaism, Union for Reform Judaism and dozens of other organizations are also lending their support.”

Not everyone signed on, however. J Street, T’ruah and Americans for Peace Now declined invitations to cosponsor the rally, and a number of other groups decided against participating.

The president of Americans for Peace Now’ complained :

“This rally looks like it will conflate criticism of the occupation and criticism of Israeli actions with anti-Zionism, and will say anti-Zionism is antisemitic, and we want no part of that,” he said.

The sense that the organizers were conflating criticism of Israel with antisemitism was the reason a number of other left-wing Jewish groups did not sign on, according to people with knowledge of the cosponsoring process. Insiders said that a number of groups were appalled by the posters one of the sponsoring groups, the Israel Forever Foundation, distributed with publicity for the rally: It was a depiction of the Israeli flag superimposed on a map of Israel, the Gaza Strip and the West Bank, without distinguishing between the entities.

Such false claims of ‘antisemitism‘ are often deployed against criticisms of Israel; a former Israeli Knesset member once explained that it was a frequently used trick. An international campaign initiated by an Israeli official to officially change the definition of antisemitism has been promoted world wide with a number of successes.

A wide range of speakers were featured at the rally (their statements can be viewed here).

One of the many speakers was Rabbi Shlomo Litvin from the University of Kentucky. Among those preceding Litvin were a representative of President Biden and Vice President Harris, Congress members Klein and Coleman, a deputy minister from Israel, and Andrew Pessin of Connecticut College.

During his time at the podium, Rabbi Litvin bragged about helping pass an anti-BDS bill, said that Rabbi Menachem Mendel Schneerson was his “personal mentor,” and called Schneerson “the foremost leader of all Judaism in the modern era.” (Schneerson was an extremist who once taught: “Two contrary types of soul exist, a non-Jewish soul comes from three satanic spheres, while the Jewish soul stems from holiness.”)

Today’s rally sponsors and participants appear untroubled by Israel’s current and historic violence against Palestinian Muslims, Christians and others.

In addition, rally organizers and attendees appear to ignore the damage done to Americans by Israel: