You Are Here: Home → At Risk in Israel’s Backlash Against Ben and Jerry’s? The Right to Protest.

At Risk in Israel’s Backlash Against Ben and Jerry’s? The Right to Protest. 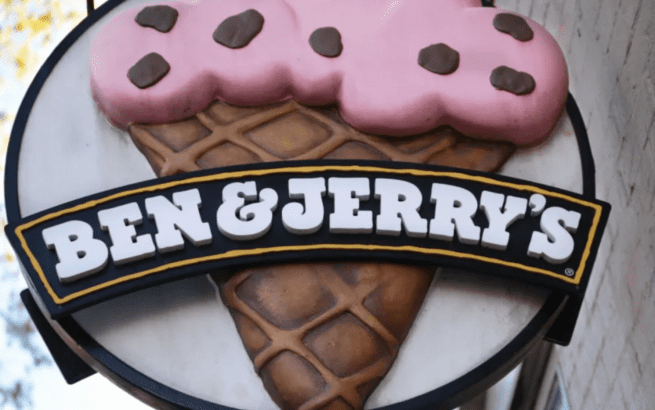 A business sign hangs over the entrance to a Ben & Jerry’s ice cream shop.

Much has been written about Israel’s relentless offensive against the ice cream company. But less has been said about the consequences for Americans’ right to protest if our constitutional right to boycott is gutted per Israel’s requests…

Ben and Jerry’s recently announced that it will not renew its agreement with its Israeli licensee when it expires in 2022, stating that it is “inconsistent” with the brand’s values “to be sold in the Occupied Palestinian Territory (OPT).” The decision, which has created tension between the brand’s independent board and its British parent company, Unilever, was the culmination of years of pressure from Palestine advocates and, more recently, the Movement for Black Lives, which views the fight for Palestinian rights as integral to the struggle for Black freedom.

Much has been written about Israel’s relentless offensive against the ice cream company. But less has been said about the consequences for Americans’ right to protest if our constitutional right to boycott is gutted per Israel’s requests. As a Palestinian and lawyer supporting those who face a cruel backlash for supporting Palestinian rights, I can tell you that these efforts are only the tip of a larger assault on all of our rights to speak out for justice.

Almost as soon as Ben and Jerry’s announced its decision, Israel and its US lobby got to work threatening the ice cream company for heeding calls to end corporate profits made at the expense of Palestinian human rights. Israel’s prime minister warned Unilever that Israel plans to respond “aggressively” to the decision. Its president classified it as a form of “terrorism.” An ambassador sent a letter to the governors of 35 US states calling on them to enforce laws aimed at blocking boycotts against Israel for its violence against Palestinians.

The message to others in corporate America was clear: Support Palestinian human rights, and we will make you pay.

[NOTE: the majority of Americans support the right to boycott.]

The reaction from Israel and its allies is familiar and expected. The pro-Israel lobby has vowed countless times before to punish entities that disturb the business of Israeli apartheid or criticize Israel for denying Palestinians their rights. (Only three years ago, pro-Israel advocates sounded the alarm on Airbnb for delisting properties on illegal Jewish-only settlements, hounding the company with harassing legal threats until it walked back its decision.) And, since 2014, Israel and its allies have tried to lock down a growing movement for Palestinian rights by pushing legislation in the US targeting boycotts, divestment, and sanctions that seek to hold Israel accountable for its violations of international law.

My organization, Palestine Legal, has tracked how more than 30 states have enacted laws that prohibit state contracts and/or investments in entities that boycott or divest from Israel. Some create McCarthyite blacklists of boycotters. Others require vendors servicing the state to pledge in writing that they will not boycott Israel for the duration of the contract. Hundreds more copycat measures have been put forward across the country by Israel-supporting lawmakers.

This is why the Israeli prime minister could warn Unilever and Ben and Jerry’s that “severe consequences, including legal” were in store.

But when these laws are challenged in court, federal judges have determined that a number of them are unconstitutional—and blocked them. Courts have been clear: Politically motivated boycotts dwell at the heart of First Amendment–protected activities. The Supreme Court ruled that boycotts against white-owned businesses in the Jim Crow South were protected. And courts have recently and repeatedly declared that boycotts protesting Israel’s human rights abuses are no different. Elected officials, Republicans and Democrats alike, who have taken up Israel’s appeal to punish Ben and Jerry’s are exhibiting their pro-Israel bona fides at the expense of all of our First Amendment rights.

These legislative attacks on our right to boycott are central to a broader right-wing assault on social justice movements as a whole. States are criminalizing protests by Indigenous and environmental activists fighting against pipelines and by Black Lives Matter activists protesting police violence. They are introducing similar laws to punish companies that divest from the fossil fuel industry. If boycotts for Palestinian rights are the first to be targeted, what is next? Ultimately what is at stake here is our right to dissent.

Let’s also be clear: Israel’s pleas to activate constitutionally suspect laws do more than enlist our government in undermining our rights and in shielding it from accountability. They are part of Israel’s strategy of swallowing the West Bank and East Jerusalem.

Israel’s visceral reaction to Ben and Jerry’s announcement to withdraw from the Occupied Palestinian Territory reveals that it will go after even those who attempt to distinguish Israel inside the Green Line from its illegal settlements—a line that Israel itself has blurred physically and economically (and a blurring the United States has furthered). Israel passed a law imposing penalties on boycotters of Israel and areas it controls, including the illegal settlements. The settlements themselves are so thoroughly intertwined with Israel’s market that it is practically impossible to pull out from selling products in the Occupied Territory without ending ties with Israel altogether—an ironic, self-inflicted consequence of trying to fortify a single state based on supremacy, spanning from the river to the sea.