You Are Here: Home → New poll: 25% of Jewish Americans think Israel is an apartheid state 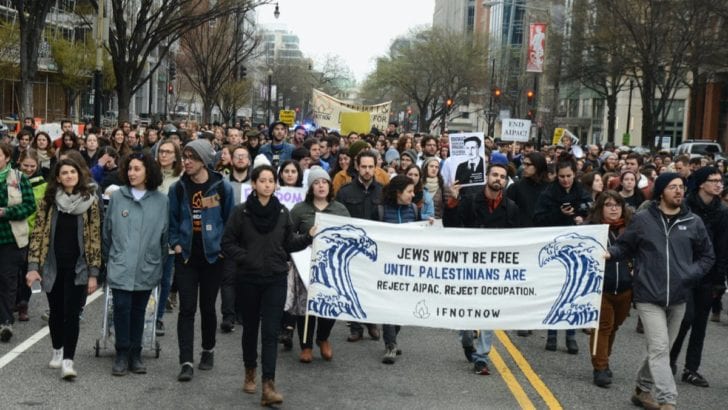 According to a recent poll, many Jewish Americans have begun to accept the reality that Israel is an apartheid state.  (Pictured: a protest by ‘If Not Now’ outside the annual conference of the American Israel Public Affairs Committee in Washington, D.C., March 2017.

A quarter of Jewish voters polled by the Jewish Electorate Institute said they believed Israel is an apartheid state. This number rises to 38% for voters under 40.

A new poll of Jewish voters in the United States found that a quarter of them believe Israel is an apartheid state. The survey also indicates that support for Israel is declining among the group, specifically among younger Jews.

When applied strictly to younger Jewish voters, these numbers all rise. 38% of Jews under 40 think Israel’s an apartheid state, 43% think Israel’s racism is comparable to the United States’, and 33% think the country is carrying out a genocide against Palestinian people. In fact, 20% of Jewish voters under 40 said that Israel does not have a right to exist.

38% of respondents said they aren’t emotionally attached to Israel. These numbers also jump among younger voters: 41% of Jews under 40 said they didn’t have an attachment.

54% of Jewish voters said that they’re very concerned about antisemitism, but the survey suggests that right-attempts to smear progressive House members and Palestine activists have largely failed. Just 22% of respondents said that antisemitism was originating from left-wing groups and individuals while 61% said it was coming from the right. 77% disagreed with former president Trump’s assertion that Democratic Jews are disloyal to Israel.

71% of respondents said they support the U.S. sending aid to Israel, but 58% said it should be restricted to deter settlement expansion. Again, the numbers shift among younger Jews. Just 60% of them said aid was important.

[Editor’s note: numerous experts have found that Israel is indeed perpetrating a form of apartheid. For example, see this and this.]