You Are Here: Home → Messi, Barcelona boycott occupied Jerusalem in solidarity with Palestine 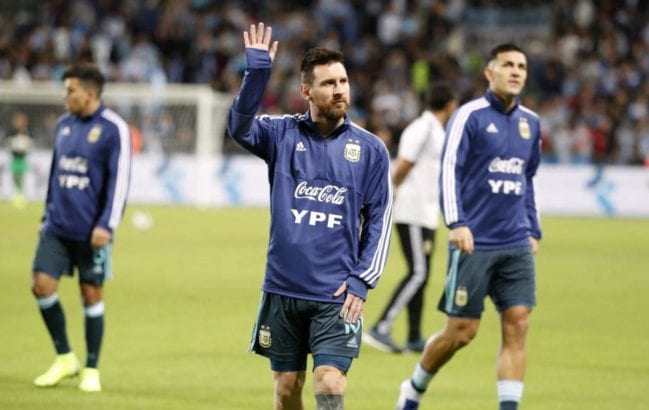 The Spanish club refuses to play in Jerusalem, following calls by Palestinian leaders to boycott the match against Beitar – a team known for its openly racist fan base.

An Israeli football club, whose fanbase is known for racism and anti-Palestinian chants, has cancelled a friendly match with FC Barcelona, following the Spanish club’s request not to hold the event in Jerusalem.

Beitar Jerusalem’s owner Moshe Hogeg said on Thursday that he had received “an unequivocal demand” from FC Barcelona that the pre-season friendly must not be played in the city and so he called it off.

Jerusalem’s eastern neighbourhoods have been occupied by Israel since the 1967 war, and are seen by the Palestinians as the capital of any future state. Israel says Jerusalem is its undivided capital.

“With great sorrow I had to cancel the game against Barcelona,” Hogeg wrote in a Facebook post.

“I’m not angry with Barcelona; ​​they are not a political club and have no interest in taking part in our conflict here. Our relationship will continue to be good,” Hogeg said, adding that cancelling the match was a difficult decision.

The match was scheduled to take place in Beitar Jerusalem’s home stadium in West Jerusalem on 4 August.

Palestinian politicians had called on Barcelona to call off the match, pointing to Israel’s continuous military occupation of East Jerusalem and the West Bank, its illegal settlement expansion, and policies of evicting Palestinians and demolishing their homes. [Go here to see what daily life is like for Palestinians.]

Jibril Rajoub, the head of the Palestine Football Association, wrote to Barcelona president Joan Laporta, noting that Beitar’s Teddy Stadium was built on the lands of al-Malha village, whose Palestinian inhabitants were forced to flee during the 1948 war. [See a short video of the history here.]

Barcelona is yet to publish an official statement on the issue.

Sami Abou Shehadeh, an MP from the Arab Joint List representing Palestinian citizens of Israel, also wrote to Laporta, saying that Palestinians of al-Malha had been forced into refugee camps during the 1948 Nakba.

In 2013, Barcelona and their iconic forward Lionel Messi played a friendly match in the coastal town of Jaffa.

In 2018, Messi was set to play for Argentina in Jerusalem, but again the match was cancelled, much to the Israeli government’s fury.

Palestinian ambassador to Buenos Aires, Hosni Abdel Wahid, had drawn a comparison between Israel’s occupation of Palestine and British rule of the Falkland Islands.

However, Argentine newspaper Clarin reported that the Argentinian Football Association had made the decision after learning “players don’t want to play in Israel because of threats against Messi” – and that the decision was not political or in any way linked to the Israeli occupation of Palestinian land.

‘The most racist team in the country’

Beitar Jerusalem is notorious for a section of its fanbase being heavily anti-Palestinian and racist against Arabs, and the club has found itself in the headlines for matters off the pitch regularly in recent months.

In December, when Hamad Bin Khalifa Al Nahyan, a member of Abu Dhabi’s ruling family, took a stake of around 50 percent Beitar Jerusalem, the fans met the deal with racist abuse against Arabs and Muslims.

Some of the club’s fans sprayed offensive and racist graffiti on the outer wall of Beitar Jerusalem’s stadium, saying: “Mohammed is Dead”, “Death to Arabs”, “F*** Dubai”, and “You can’t buy us!!! $ Don’t f*** with us!”

Its hardcore fan base, known as La Familia, is routinely abusive towards opposing players, taunting them with racist and anti-Arab chants. One chant goes: “Here we are, the most racist team in the country.”

The 300m shekel-deal (worth almost $92m) with Bin Khalifa Al Nahyan was scuppered in February, when Israel’s Football Association froze the sale, citing “significant gaps” in the Emirati’s financial situation.

Beitar Jerusalem is the only club in the Israeli Premier League never to have had any players from the Palestinian community in Israel, which comprises 20 percent of the country’s population.

Upon his purchase of Beitar in August 2018, Hogeg, a technology entrepreneur, promised to change the club’s culture.

For additional information and to take action, read below:

Palestinian players are routinely attacked, imprisoned and killed. Players are denied freedom of movement to attend their own matches. Palestinian stadiums have been bombed and destroyed. Israel even prevents football equipment from being imported and football facilities from being developed.

Racism against Palestinians is institutionalised in Israeli football. From segregated youth football leagues to anti-Palestinian hate from fan clubs that goes routinely unpunished.

In addition, seven Israeli clubs based in illegal settlements are allowed to play in the official league of the Israel Football Association (IFA) making FIFA – the football governing body – complicit with violations of international law.

But FIFA has looked the other way, refusing to take action. This campaign seeks to suspend Israel from FIFA and other international forums until it ends its attacks against Palestinian football… Read more

Action Alert by PACBI: Go here to “Urge Atlético Madrid and Inter Milan not to play in apartheid Israel”