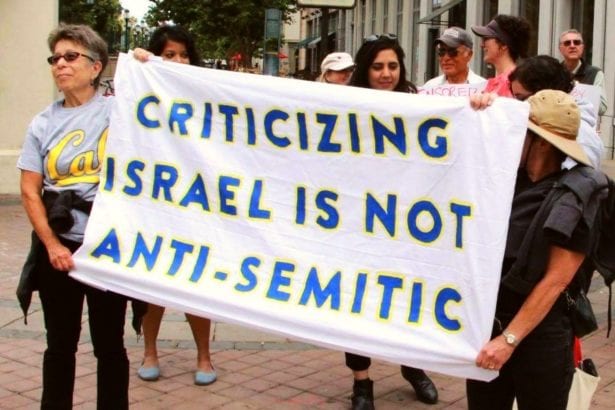 Pro-justice groups have protested against “Progressive Except Palestine.” (Pictured: activists from the Jewish Voice For Peace join students and faculty in protesting the “Anti-Semitism Awareness Act,” at University of California, Oct. 2015.)

In a moment when support for Israel is slipping a bit in Congress, this Israel-right-or-wrong group proposes a new category of antisemitism in hopes of persuading Progressives to alter their agenda to accommodate pro-Israel Jewish Americans.

Israel has enjoyed almost total dominance on Capitol Hill for years, receiving a minimum of $10.5 million in aid per day, no strings attached.

But times are changing.

The last few years have seen a small – but growing – coalition of Congress members (currently all on the left) who question the wisdom of supporting a state that consistently violates international laws and uses American aid to perpetuate occupation and state violence against the Palestinians among them.

Israel partisans in the United States have gone into overdrive in an effort to rescue the so-called Jewish State from this “progressive” thinking.

Of course, Israel has no intention of changing its policies toward Palestinians – so it’s the Progressives that will have to change.

The Reut Group published a policy paper on March 15, identifying just what it is about the Progressive movement that needs to change so that Israel partisans will be comfortable.

Anyone who watches pro-Israel trends will be unsurprised to hear that Reut’s new strategy revolves around antisemitism – a variety that is “largely an unintended consequence of contemporary progressive discourse,” but still dangerous. The report, called “Erasive Antisemitism,” posits that, in order to be regarded as progressive, Jews are frequently expected to “renounce support for Israel or Zionism.”

This “assault on Israel’s legitimacy from the left” is a rather new phenomenon, as Israel has enjoyed bipartisan support for decades.

The report’s author, Daphna Kaufman, is a former communications and research director for AIPAC, the American Israel Public Affairs Committee, and has lived in Israel since 2009.

She identifies several contexts in which this erasive antisemitism allegedly occurs – each of which is problematic and paradoxical.

According to Kaufman, progressive “skin color-based” politics takes away Jews’ right to their own narrative.

She contends that progressive circles have defined Jews – without their consent – as white and privileged. Thus, in order to conform to progressive expectations, Jews are required to “acknowledge their privilege and power status,” which supposedly negates the “unique historic persecution and continuous vulnerability of the Jewish People.”

In reality, acknowledgement of privilege does not invalidate a traumatic history.

The fact is that everyone inhabits multiple identities. Gay white males may experience both privilege and intolerance; affluent African Americans may benefit from their wealth and from affirmative action, while still carrying the burden of their ancestors’ enslavement and decades of Jim Crow discrimination. Some groups – for example, disabled Native Americans and Appalachian hill people – may find themselves at the intersection of two or more disadvantaged identities.

It is not possible to ignore the fact that 89 percent of Jewish Americans are white, and 44 percent of Jewish households – the highest of any religious group – have an income of $100,000 or more. As the wealthiest ethnic group in the country, Jewish Americans undeniably hold a place of privilege while still bearing the pain of their people’s past.

The problem of the de-emphasis of Jewish trauma seems to lie in its implications vis a vis Israel.

While conservatives as a group seem to turn a blind eye to Israel’s atrocities, progressive circles tend to acknowledge Israel’s role as a powerful white oppressor. According to Kaufman, Jews who identify as progressive are expected to adopt this view and distance themselves from Israel. This in turn, Kaufman claims, strips Jewish progressives of the right to “represent their own narrative” and places Jewish Israel supporters at odds with “coalitions for racial justice.”

Behind this theory is the implication that progressive Jews who do not support Israel have been in effect forced to do so – and have abandoned “the” Jewish experience in the process.

The report declares that Jews should have the exclusive right to “define their identity” – but as for those whose definition does not include support for Israel, they have discarded their true identity.

This assumption fails to acknowledge the fact that large numbers of Jews freely disapprove of Israel’s actions – in fact, it rejects the entire narrative of pro-justice Jews (including some Israeli Jews), thereby committing its own “erasure antisemitism.”

Those Jews who identify as progressive and still support Israel will be challenged, not in order to rob them of their history, but because progressive norms call out oppressive regimes. Progressive Except Palestine is inconsistent with true progressivism and with the facts.

Israel was created as a Jewish state on land with a 32 percent non-Jewish population, drove out 750,000 indigenous people because they were not Jewish, and until now treats the remaining indigenous Palestinians as third-class citizens. (Jews of color – from Africa, Asia, and the Middle East – are second-class citizens.)

Israel’s Nation-State Law spells out the ethno-national supremacist flavor of the state, with such clauses as:

Reut’s policy paper does not address the racism in the Nation-State Law or any of Israel’s other policies of ethnic cleansing, preferring instead to silence its critics.

According to the Reut Group, progressive ideology around Israel “divides” and “undermines” the American Jewish community, creating a rift where there should be a unified voice in support of Israel as the home for all Jews – a Progressive Except Palestine monolith.

The fix, according to the policy paper, is to change “the rules of the game.” Grassroots Jewish efforts need to step in and recreate the progressive movement by making it more inclusive, i.e. by insisting that it make room for an ethno-nationalist supremacist project (or be considered antisemitic).

To lead the charge on the “new front lines of advocacy,” Kaufman calls for assistance from progressive Jewish movements – “many of which are…Zionist.”

That is, the solution is more Zionism.

Calling it what it is

Kaufman believes that, at least in some cases, human rights language is being used to “negatively brand Israel” and “[hide an] anti-Zionist agenda.”

In fact, progressives use human rights language to call attention to Israel’s human rights abuses against Palestinians – an issue on which the policy paper is silent.

Significantly, the report fails to acknowledge the Palestinian identity and experience as oppressed and disenfranchised.

Elephant in the room

This report shows the true colors of its creators: they identify perceptions and opinions within the progressive community that need to be “changed,” and avoid discussing the facts of Israel’s policies and actions.

The report ignores the shocking statement released in January by Israeli human rights watchdog B’Tselem, declaring Israel an apartheid state (a label that rights groups have employed for years). There is no acknowledgement of the 53-year occupation, the 14-year blockade, or the decades of oppression that Palestinians have experienced under the boot of Israel.

Progressive Jews (and non-Jews) who support Israel need to stop asking for special accommodation. No one is obligated to indulge your devotion to a reckless and violent state.