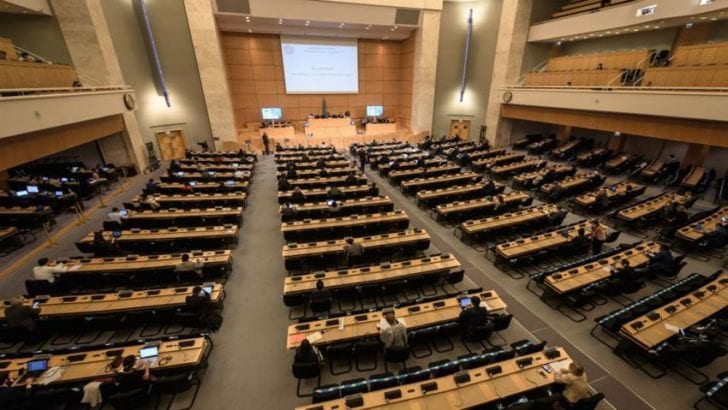 The United Nations Human Rights Council passed a resolution calling for an arms embargo against Israel.

In a reversal of typical Human Rights Council voting patterns, several European countries that usually abstain from moves critical of Israel, voted in support of an arms embargo on Israel; Bahrain, which usually supports such measures, rejected the motion.

The United Nations Human Rights Council (UNHRC) voted in favour on Tuesday of a resolution that called for an arms embargo against Israel.

The motion secured the support of some European countries but was rejected by Bahrain who had previously supported such measures.

The resolution passed 32-6 and contains strong language against Israel’s human rights practices and calls for UN member states to stop transferring arms where “there is a clear risk that such arms might be used to commit or facilitate serious violations or abuses of international human rights law or serious violations of international humanitarian law”.

In total, six countries – Austria, Brazil, Bulgaria, Cameroon, Malawi, and Togo – opposed the resolution, while Bahrain, for the first time, was absent.

In a reversal of typical voting patterns, a number of European countries who had previously chosen to abstain from votes critical of Israel instead voted in support of the measure.

#HRC46 | Resolution A/HRC/46/L.31 requests the High Commissioner to report on the human rights situation in the Occupied Palestinian Territory, including East Jerusalem, and the obligation to ensure accountability & justice

Denmark, France, Germany, Italy, the Netherlands and Poland all voted in favour of the resolution.

In the past, European countries have been critical of the number of repetitive texts and the standing mandate to debate allegations of Israeli human rights violations at every session. A merging of Item 2 and Item 7 on the agenda resulted in increased support for the resolution.

Embargo would cut arms supply orders in half for Israel

The text of the resolution, dubbed the accountability resolution, calls for countries to half the supply of arms to Israel where it is known they are being used to commit human rights violations.

Prior to the vote, last Thursday, UN High Commissioner for Human Rights Michele Bachelet said that her office had prepared three reports regarding Israeli activity against Palestinians.

“In the vast majority of cases monitored and documented by my office, Palestinians were killed or injured while appearing to pose no imminent threat of death or serious injury in the West Bank, including east Jerusalem,” said Bachelet.

Following the vote, Austria’s envoy Elisabeth Tichy-Fisslberger, speaking on behalf of the EU, thanked the Palestinian Authority for agreeing to merge resolutions.

“We wish to thank the mission of Palestine for its engagement and efforts on this and other resolutions…We recognise the considerable efforts made by the Palestinian mission and look forward to continued engagement with them in a positive spirit,” she said.

Palestine’s ambassador to the UN in Geneva, Ibrahim Khraishi, hit back at allegations that it was unfairly attacking Israel, and insisted that the calls for accountability will continue.

“The issue of Palestine is an issue of foreign occupation for over 45 years. The idea of accountability, remedy and reparation should be a consensual matter for all countries,” he said.

Israel’s ambassador, Meirav Eilon Shahar, said that even with the merging of the resolutions, it still represented a bias against Israel.

“When I look through this resolution, I am amazed that members of the Council could ever consider this a fair and balanced resolution. It does not reflect the reality on the ground, and if anything this resolution will contribute to the polarisation of the conflict,” Elion Shahar said.

She also lambasted the resolution for making no mention of Hamas.