You Are Here: Home → Palestinian Child Dies After Israel Denies His Travel for Treatment Abroad 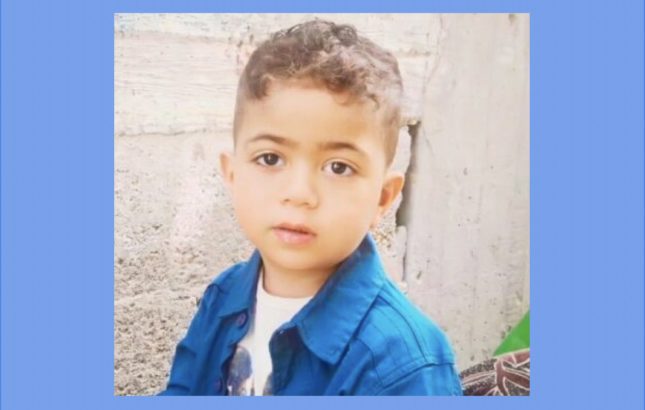 Little Faroud Abu Naja died while Israel “studied” his request for a travel permit to obtain medical care just 66 miles from his home. Faroud is one of over 4,000 residents of Gaza whose medical care Israel has interfered with so far in 2022.

The Palestinian Center for Human Rights (PCHR) condemns the Israeli occupation Forces’ (IOF) continuous obstacles on the travel of Gaza Strip’s patients, denying them access to the Palestinian hospitals in the West Bank, including occupied Jerusalem, and Israeli hospitals for receiving or resuming their medical treatment.

These obstacles have aggravated the suffering of thousands of patients and resulted in the death of 4 patients; the last one was Faroud Mohammad Ismail Abu Naja (6), whose travel permit for treatment at Hadassah hospital in the occupied Jerusalem, was denied. [Some reports give his name as ‘Farouk’.]

Abu Naja added that his grandson received a medical referral for treatment on 12 January 2022 at Hadassah- ‘Ein Kerem Hospital in Israel; the referral is funded by the Christian Aid Ministries. He applied to have a travel permit from the Israeli occupation authorities; however, the latter replied that his request is still under study.  Thus, the child could not travel for treatment on the given appointment.

Abu Naja said that they obtained another appointment on 10 August 2022 and then re-applied for the travel permit, but the Israeli authorities kept replying that the request is “under study”. While waiting for the Israeli approval, Faroud Abu Naja’s health deteriorated until he died at the European Gaza Hospital on Wednesday evening, 24 August 2022.

According to the Health Department of the General Authority for Civil Affairs (GACA) statistics, since the beginning of this year, the Israeli authorities have obstructed the travel of 4,169 patients from the Gaza strip for treatment abroad since.  Most of these patients suffer serious diseases that lack treatment at the Strip’s hospitals.

IOF invoke various reasons and excuses to prevent Gaza patients from traveling for treatment; including requests under study, summoning patients for a security interview, requests denied for having a relative illegally residing in the West Bank or Israel, and the treatment available in Gaza hospitals.

These restrictions come with the deterioration of the healthcare system in the Gaza Strip triggered by the Israeli-imposed closure for 16 years, as the Gaza Strip hospitals suffer from acute shortage of essential drugs and medical devices and insufficient number of specialized health professionals; rendering the hospitals unable to treat many serious diseases and so raising the number of patients referred for treatment abroad during the past years.

In light of the above, PCHR calls on the international community, including the High Contracting Parties to the 1949 Fourth Geneva Convention, and the UN bodies and international organizations to exert pressure on the occupation to assume their legal responsibilities towards the residents of the Gaza Strip, including patients, and to ensure an appropriate and safe mechanism is provided for their travel.

PCHR calls on the international community to pressure Israel to lift the closure imposed on the Gaza Strip in line with Security Council Resolution No. 1860, and to import the medical supplies used in radiotherapy, chemical drugs and periodic examinations for cancer patients that are not available in Gaza hospitals.