You Are Here: Home → After 15 years of blockade, 4 of 5 children in Gaza struggle with depression, grief & fear

After 15 years of blockade, 4 of 5 children in Gaza struggle with depression, grief & fear 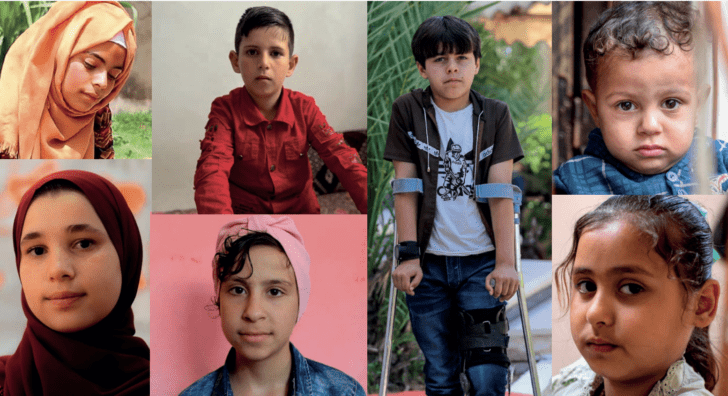 When Save the Children asked the children of Gaza, what would make you feel better, they spoke about their desire to experience feelings like courage, joy, strength, calmness, safety and security, love and optimism. (photo)

In the past decade and a half, children in Gaza have endured numerous Israeli invasions; a pandemic; and a life-limiting land, air and sea blockade imposed by Israel in 2007.

In 2018, Save the Children undertook research on Gazan children’s psychosocial wellbeing. In 2022, after another escalation in violence in May 2021 and following the COVID-19 pandemic, Save the Children consulted a further 488 children and 160 parents and caregivers. Here’s what they found…

Report by Save the Children, June 2022

Foreword – a message from Gaza’s children

“We are children who live in the Gaza Strip. Our home is a small place with tiny streets and lots of people who all live really close to each other. Because it’s so small, everywhere is dangerous and there is no place to take shelter.

We want you to know that Gaza, our home, is being destroyed. Even the nice places like schools and hospitals. There isn’t much electricity for hours at a time. We all have to sleep on the floor or in hallways, and it’s really dark at night.

Life is scary and our roofs are falling on our heads. Every time there’s an airstrike, we are terrified. Our rooms shake, and then our hearts shake too with fear for our families. Our mothers tell us that the noises are far away, but we know they are close.

A few of us still remember the last war in 2014. Some of us lost people we loved – family members or a favourite teacher. Others remember glass shattering, buildings falling, or our mothers trying to clean the dust that filled the house after each bombing.

We know that other children around the world lead quiet and calm lives. While other children dream of having video games, we dream that one day this fighting will end. We hope that one day we can open our books again, write in our notebooks and study, that we can go outside and play with friends.

The first thing we wish is that the war would end. All children should be able to live in peace. We hope that all the destroyed buildings will be cleared away and something better and more beautiful will come in their place. We hope that our homes, schools and hospitals will be rebuilt.

Above all, we want to live like children in other countries who can play in playgrounds instead of hiding from bombs. We want Gaza to be a safe and beautiful place where we can live in peace. We still have hope. But we want this war to be the last war.” 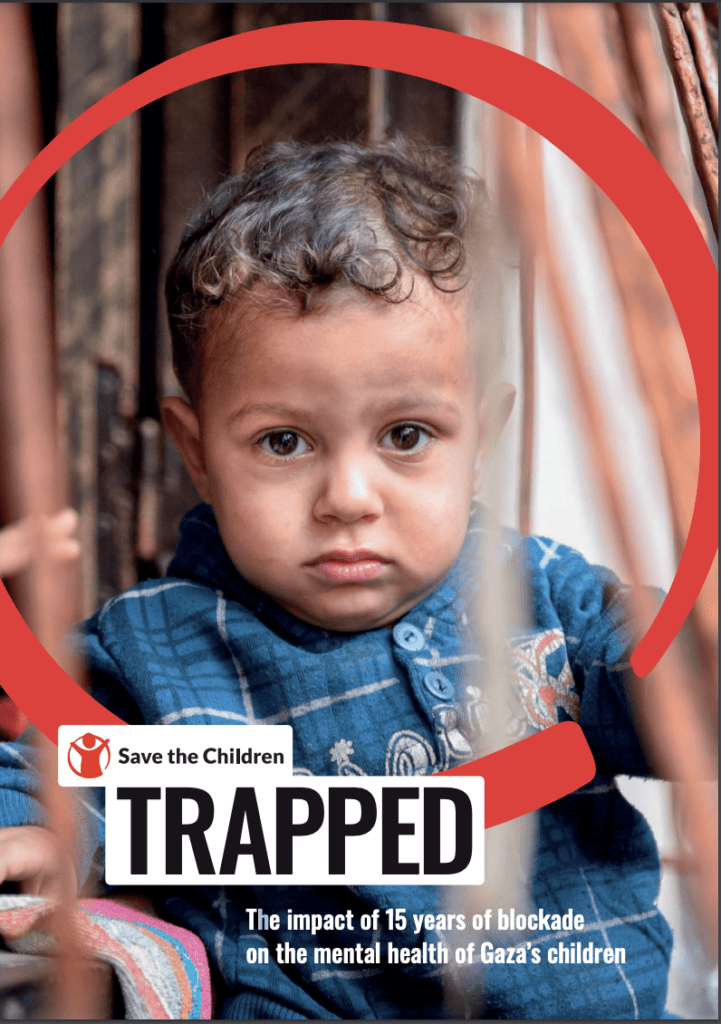 In the past decade and a half, children in Gaza have endured six life-threatening situations – five escalations in violence and a pandemic – as well as a life-limiting land, air and sea blockade imposed by the Government of Israel.

The closure of the occupied Gaza Strip, in its current form, has been in place since June 2007, when Israel imposed a blockade on the area.[1] It is no surprise that the lives of children in Gaza have been described as “hell on earth” by UN Secretary-General, Antonio Guterres.[2]

In 2018, Save the Children undertook research on the impact that living under blockade and protracted instability and cyclical violence has had on children’s psychosocial wellbeing in Gaza. In 2022, after another escalation in violence in May 2021 and following the COVID-19 pandemic, Save the Children consulted a further 488 children and 160 parents and caregivers to see how things have changed for children living in the Gaza Strip.

The study found that, since 2018, the psychosocial wellbeing of children, young people and their caregivers has declined dramatically to alarming levels. When we asked children and young people in 2022 what their daily lives in Gaza are like they spoke of living in a perpetual state of fear, worry, sadness and grief, waiting for the next round of violence to erupt, and feeling unable to sleep or concentrate.

Many shared vivid memories of the bombings they had experienced, recalling how their homes and schools were destroyed, and their loved ones killed. They also spoke of how the blockade affects every aspect of their lives and shapes their hopes and aspirations for the future.

When we asked children and young people about their ‘unwanted’ feelings, they spoke of fear, nervousness, anxiety, stress and anger, and listed family problems, violence, death, nightmares, poverty, war and the occupation, including the blockade, as the things they liked least in their lives.

When we asked them what would make them feel better, they spoke about their desire to experience feelings like courage, joy, strength, calmness, safety and security, love and optimism.

Most of all, they wanted to enjoy their lives and to have the freedom to pursue their dreams like many other children around the world. As the children wrote in the letter that forms the foreword to this report, they want Gaza to be a safe and beautiful place where they can live in peace. 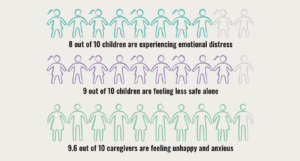 The research shows that the combination of chronic instability and protracted social and economic hardship, coupled with children’s repeated exposure to traumatic events, constant fear that their lives could be upturned at any time and sense of hopelessness about their situation have progressively undermined their psychosocial wellbeing and significantly reduced their capacities to cope and recover.

Fifteen years of blockade have resulted in fear and deprivation, which have taken a significant toll on the psychosocial wellbeing of children and young people in Gaza, as well as the capacity of their caregivers to support them to cope and recover. Our findings suggest that their psychosocial wellbeing is likely to deteriorate further, and to even more alarmingly low levels, if the situation in Gaza continues without change and children and their caregivers have no hope of respite.

The findings in this report must serve as an alarm bell. They show, once again, that the loss of children’s lives, wellbeing and hopes for a better future are the costs of the status quo. This study clearly shows a deterioration in children’s psychosocial wellbeing, the fracturing of relationships and dreams curtailed as a result of the ongoing conflict, occupation and blockade of Gaza.

Five years ago, caregivers said the blockade, chronic poverty and insecurity were pushing their capacity to support their children to its absolute limit, and that it would most likely be utterly destroyed in the event of another conflict.[5] Our findings show that, sadly, caregivers’ predictions have come true.

Regarding the first point, the most urgent step required is lifting the blockade on the Gaza Strip.

The Government of Israel, as the occupying power, is the main duty bearer and must comply with its obligations under international law. In particular it must take immediate steps to lift the blockade, within the framework of UN Security Council Resolution 1860 (2009). The international community should urgently put pressure on Israel to take these steps, along with bringing an end to the ongoing occupation and an end to the blockade.

Regarding the second point, support must be given to increase the resilience and ability to cope of children and their families. Taking the ‘whole family’ approach[6] is key to ensuring that caregivers – who themselves are exposed to significant distress – are supported so that they can comfort, reassure and support their children and buffer the impact of adversity on children’s wellbeing.

This requires a range of mental health and psychosocial support (MHPSS) and protection services, including those for children, to be available and accessible. Investments need to be made towards strengthening child protection systems and MHPSS services.

Donors, international actors and local authorities must urgently scale up immediate, flexible funding to child protection and MHPSS interventions. Assistance should be provided in a respectful and dignified manner and should be gender and conflict sensitive as well as child friendly, in order to support children’s and caregivers’ autonomy and decision‑making capacities.

Together, we must ensure that a generation of children is spared a life of fear, distress and limited opportunities…

Read the full report for citations and much additional information

FURTHER READING ON THE SITUATION IN GAZA: