You Are Here: Home → Israeli soldier: ‘We killed a little boy, but it was within the rules’

Israeli soldier: ‘We killed a little boy, but it was within the rules’ 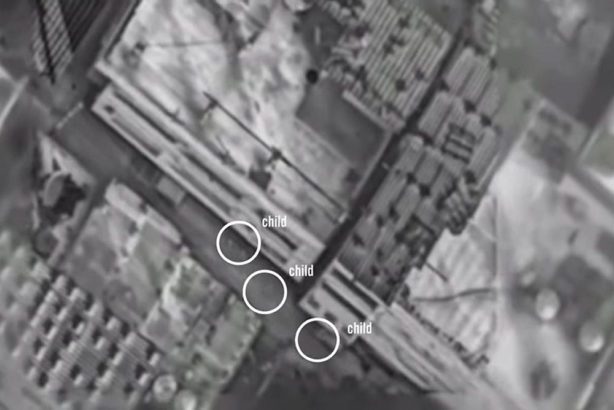 Screengrab showing aerial footage of the Gaza Strip with three children circled, from a video uploaded to the Israel Defense Forces YouTube account. This planned IDF strike was aborted, other cases such strikes go forward despite the knowledge that children were about to be killed. (IDF)

Former IDF soldiers reveal how the army authorizes strikes in Gaza knowing civilians will be killed, so long as the number is deemed low enough.

Israel’s latest attack on Gaza ended with 48 Palestinians killed, including 16 children. Israel claimed that 15 of those Palestinians were killed by errant rockets fired by Palestinian Islamic Jihad (PIJ), which landed inside the strip, and that Israeli airstrikes killed 24 PIJ militants and 11 “non-combatants.”

The Israeli news site Ynet quoted army officials boasting that the ratio between “non-combatants” and combatants killed was “the best of all the operations.” And yet, Israel admits that it killed at least 11 people who had nothing to do with militant activities, including a five-year-old girl.

The army also admitted that it shoots unarmed people, according to a female officer who gave an interview to Ynet after the latest onslaught. “The [PIJ] operative came down from the position as he was unarmed, and I opened fire,” she said. “When he fell, I fired more.”

The majority of Israelis believe that any children or families killed in Gaza during Israel’s military operations — the sole goal of which, of course, is security — are killed unintentionally. Unlike the terrorist organizations, the thinking goes, Israeli forces do not knowingly kill innocents. This mechanism allows Israeli society to forget scenes of blood and horror, and push out of our consciousness the hundreds of children that the army has killed in Gaza over the years.

But the reality is far more complex. Conversations with Israelis who served in various units of the IDF Intelligence Corps over the last months reveal that during its military operations, in many cases the army knows ahead of an attack that it will be killing unarmed civilians. The decision to kill them is not a mistake, but rather a calculated and conscious one.

The former soldiers testified that they were told by their superiors that there is a certain number of “non-combatants” — meaning families and children — that the army is allowed to kill during operational activities. As long as this amount is not exceeded, the killing can be approved in advance.

‘They killed the Hamas operative — and the little boy’

Dana — who asked to use a pseudonym, like all the former soldiers interviewed for this article — is a kindergarten teacher who lives in a wood-furnished apartment full of philosophy books in central Tel Aviv. During her military service, she took part in an assassination operation in which a five-year-old boy was killed in Gaza.

“When I served in the Gaza Division, we were following someone from Hamas, because [the army] knew he was hiding rockets,” she said. “They made a decision to eliminate him.”

Dana served as a signal traffic analysis officer in the operations room, where her job was to confirm that the missile had hit the right person. “We sent out a UAV to follow the man to kill him,” she said, “but we saw that he was with his son. A boy who was five or six years old, I think.

“Before an assassination, information from two different sources must be cross-referenced so that we know we are killing the right target,” Dana explained, “I told the commander, who was a lieutenant colonel, that I could not fully identify the target. I asked not to confirm the shooting. He said: ‘I don’t care,’ and confirmed it. He was also right. It was the correct target. They killed the Hamas military operative, and the little boy who was next to him.”

Dana offered me a glass of water, as the smell of sawdust came wafting in from a nearby lumberyard. “How did you feel after all this?” I asked her. “I had defense mechanisms in the army,” Dana said, explaining that she was in denial.

“The commanders said that this complies with the rules, and so it is allowed,” she continued. “We had rules in the army regarding how many non-combatants were allowed to be killed in Gaza together with those who were targeted for killing.

“Why this number? I still don’t know. Today it seems crazy to me. But there are rules and the internal logic they came up with, which makes it easier to do it. It makes it okay.” Dana served in the Intelligence Corps until 2011.

Dana’s words were echoed by several other officials in the Intelligence Corps with whom I spoke, who served in the corps during previous wars on Gaza in recent years.

Three of them, including Dana, said that following an Israeli shelling in Gaza in which Palestinians are killed, soldiers are asked to monitor the phone conversations of family members, in order to hear the moment in which they tell each other that their loved one has died.

“It’s another way to check who was killed, and a way to make sure that the person we wanted is dead,” Dana explained. This was her job following the killing of the five-year-old boy. “I heard a woman say: ‘He’s dead. The child is dead.’ That is how I confirmed it happened.”

Some of these conversations are saved and later used to teach soldiers Arabic, testified Ziv, who finished his service in a top-secret intelligence unit three years ago. The first time he heard such a conversation was during training. He says it was a moment that was etched into the minds of the soldiers as “particularly shocking.”

“During training, we learned Arabic through phone calls from Palestinians,” he recalled. “One day, the commanders presented a call from a mother whose husband told her on the phone that their child had been killed. She started screaming and crying — it was very difficult to listen to it. It tore your heart. We had to translate her screams into Hebrew. We were a bunch of kids, 18 years old. Everyone left the class completely upset.

“It wasn’t even a political act — there was a right-winger among us who was horrified by it,” Ziv continued. “The conversation affected mostly the boys, more so than the girls — I don’t know why. I asked the commanders later if we had to learn Arabic from these kinds of conversations, but they had no answer. They were also kids, 19 year olds.”

‘The Truman Show’ in Gaza

Adam, 23, was released from the Intelligence Corps last year, after three years in the SIGNIT unit that oversaw Gaza. He said that the control of the borders, and the dependence of the strip’s residents on Israel, provides Israel with superior intelligence and makes it possible to recruit collaborators. “They have no way to get out of there,” he said. “The Egyptians are also working with us in full cooperation.”

“You control all their crossings — that gives you a lot of power,” said another soldier, who served in a technology unit in the Intelligence Corps in 2019. “If Gaza is connected to the West Bank, you lose some of that power. Today we control everything that goes in and out, whether physically, electronically, or in terms of people. This allows for more modes of action: for example, people in Gaza beg to be able to travel in order to study abroad or visit relatives outside the strip. This can be used to turn them into collaborators.”

“There were people for whom I had no empathy at all. All of the senior members of Hamas, who were very ideological — you really heard that they wanted to die for the homeland,” said Adam. “I didn’t connect to their nationalism. That is why I had justification for hurting them. But we also gathered information on many people at lower levels, who were simply doing their job. They come to the office. They ask their wife what to have for dinner.”

According to Adam, the personal information that the army gathers is used to recruit collaborators. “There is no such thing as privacy,” he said. “You know everything about the person. What they like, what they have photographed [on their phone], whether they have a lover, and their sexual orientation. Everything is completely exposed. You can collect information about anyone you want. And you know that these people wouldn’t want you to know these things.”

Shira, another Intelligence Corps soldiers, said that she was surprised by how many Palestinian collaborators worked with the army. “I remember the officers showing me: ‘He is a collaborator. As is he. And him too.’ Hamas and Fatah people give us intelligence to no end. At a certain point, I felt as if everyone was cooperating with us. As if there is only Israel, with no conflict, and we are all living in a version of ‘The Truman Show.’”

MORE ON ISRAELI KILLING OF CIVILIANS: