You Are Here: Home → Flashback: Attack on the USS Liberty – Lessons for U.S. National Security 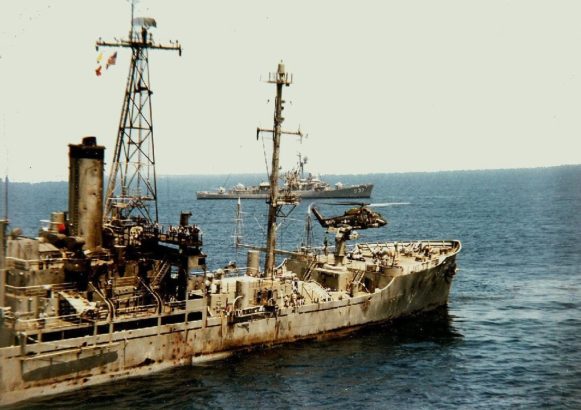 All too often it has been Israeli intransigent policies rather than U.S. interests which have dominated our bilateral relationships…

It is ironic that the Israeli Defense forces attacked a flotilla of relief ships bound from Europe to Gaza in international waters in a manner all too similar to its assault against the USS Liberty also in international waters on June 8 forty-three years ago. It is even more tragic and a national disgrace that in the immediate aftermath of Memorial Day there is scant remembrance of the 34 crew members comprising naval officers, seamen, two marines and a civilian who were killed in the attack along with the 171 crew members who were wounded. While the official inquiries by both nations found the attack to be a case of mistaken identity of the Liberty, to this day there is a long record of distinguished officers and journalists who take strong exception to this view believing that the attack was deliberate. Indeed the attack on the Liberty is the only maritime incident in U.S. history where our military forces were killed that was never investigated by the Congress.

While few would dispute that the United States and Israel share vital strategic interests, all too often it has been Israeli intransigent policies rather than U.S. interests which have dominated our bilateral relationships. As a global superpower, the U.S. has strategic interests in the Middle East that go far beyond our bilateral relations with Israel—regional political stability, access to oil, control of sea lanes, etc. However so lopsided have our bilateral relations become that even after scandals such as the Pollard spying case in the 1980s came to light, high level officials and lobbyists in both Washington and Israel went out of their way to downplay the significance of the information Pollard passed to both Israeli and Russian intelligence (in order to keep Jewish immigration to Israel alive), despite testimony by four retired admirals who had served as Directors of National Intelligence that Pollard’s revelations had been devastating to U.S. national security and that any premature release would be “irresponsible.”

Again in 1973, it was the decision by the United States to resupply Israel’s military following the outbreak of war that led to the OAPEC oil embargo transforming the Geopolitics of Oil as the world’s economy was sent reeling owing to the spike in the price of oil. The 1973-1974 war by changing the geographical contours of the Middle East set the stage for the growing radicalization of the Middle East as increasingly young men and women grew resentful of their leaders’ inability to change the political and social status quo both in their own countries and in their nations’ relations with Israel.

The second oil shock in 1979 and 1980, following the overthrow of the Shah and the coming to power of Ayatollah Khomeini, led to a further radicalization of the region which further inflamed relations among Iran/Iraq, Shites/Sunnis, Christains/Druze/Palestinians in Lebanon and Iran and Iraq in their bilateral relations with various governments throughout the region. At the same time, accelerated settlements by Jewish immigrants in the West Bank, Gaza and East Jerusalem created a growing crescendo of radicalism. Then in 1982 the ill-conceived invasion of Lebanon in response to provocations by Palestinians and other radical forces* led to the massacres of Palestinian and allied groups men, women and children at Sabra and Shatila by the Christian Phalanges while the IDF stood on the sidelines losing all pretense of a higher moral ground.

Since that time there have been provocations by both the Israelis and the Palestinians and their affiliated allies throughout the Middle East. There have been lost diplomatic opportunities, ill tempered rhetoric by leaders on both sides and a tragic loss of life. Indeed there is plenty of blame to go around on both sides and reasons for each side to be wary of any overture by the other. However, what has been lost during these decades throughout the Islamic world is the view of the man and woman on the street and children in the madrasahs that United States is an honest broker for peace. Having worked throughout the Islamic world for over 35 years, it is a tragedy that this has occurred, but when successive Presidents and other high ranking officials ask Israel not to expand settlements yet hardly voice a “public squeak” of opprobrium let alone some real expression of disapproval (such as a curtailment of military assistance, rescinding favorable trade provisions, etc.) when Israel continues to do so, what is the Islamic World to think about the even handedness of U.S. policy?

Nowhere was the failure of the U.S. to take strong action more visibly demonstrated than during Vice President’s Biden’s visit to Israel when Israel gave the green light for 1,600 new homes for Jewish settlers in annexed East Jerusalem in flagrant violation of international law. In response, both the Vice President and Secretary of State Clinton labeled the action “insulting” to the United States and destructive to the peace process while at the same time doing nothing visible to make Israel pay a price for such actions against the second highest official of our nation.

America, it is time to wake up and listen to the very few of our leaders such as General Petraeus, who even before the Vice President’s visit warned that the stalled Middle East peace process is a direct threat to U.S. interests and prestige in the region and that the lack of progress in Palestine foments anti-Americanism, undermines Arab regimes, limits the strength and depth of U.S. partnerships, increases the influence of Iran, projects an image of U.S. weakness and serves as a potent recruiting tool for Al Qaeda. General Petraeus and his briefing team went on to say that the ongoing Israeli/Palestinian peace stalemate undermines the prospects for success in Afghanistan.

As we approach the anniversary of the attack on the Liberty, let us take a few minutes to reflect soberly on whether the time has not come to once again be a honest broker, to call our Israeli friends to account when necessary with sanctions that hurt and to make clear to one and all that acts such as the attack on the flotilla of humanitarian ships bound to alleviate the suffering of the men, women and children of Gaza will not occur with impunity.

*This causation is disputed. According to Israeli historian Avi Shlaim, the real driving force behind the Israeli invasion to Lebanon was defense minister Ariel Sharon’s aim to destroy the PLO military infrastructure in Lebanon and undermining it as a political organization, in order to facilitate the absorption of the West Bank by Israel.