You Are Here: Home → Israeli Soldiers Kill A Palestinian Near Jerusalem 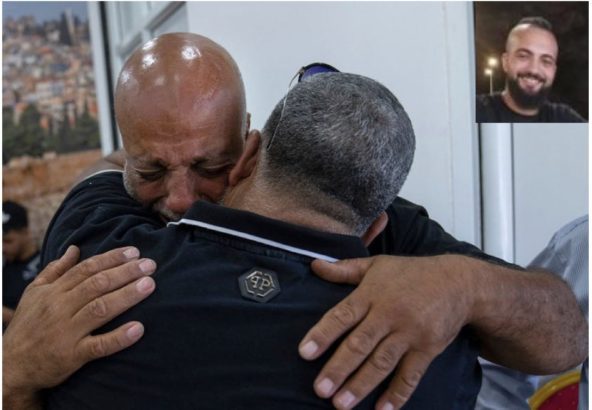 Mohammad Shaham, 21, woke up to banging on his family home’s door in the middle of the night; Israeli soldiers shot him in the head at point blank range without explanation or even verifying his identity first.

On Monday dawn, undercover Israeli soldiers killed a young Palestinian man in his home in Kafr Aqab neighborhood, north of occupied Jerusalem in the West Bank.

The soldiers shot Mohammad Ibrahim Shaham, 21, with a live round in the head after storming his home.

His father said a soldier shot Mohammad, who was born in the nearby Qalandia refugee camp, with a live round to the head from point-blank range the moment he opened the door for the soldiers invading his home and proceeded to ransack the property.

The soldiers also fired many live rounds in the property before ransacking it.

His father added that the soldiers left Shaham bleeding for about 40 minutes before they took his corpse and withdrew from the town.

The father added that the invasion into the property took place around 3:30 at dawn, before one of the soldiers put the pistol against his forehead and killed him.

“This is an assassination in cold blood, just like they did in Jenin, and what they are doing across occupied Palestine,” the father added, “The soldiers didn’t ask for our names, ID cards or ask any questions, they just stormed the property and assassinated by son. Just five months ago, exactly on March 15, the soldiers killed his cousin.”

His cousin’s name is Ala’ Mohammad Shaham, 22, he shot also shot in the head in the Qalandia refugee camp, where the soldiers also shot and injured six other young men with live rounds, who were all transferred to the Palestine Medical Complex in Ramallah.

The family denied the Israeli military allegations that claimed the Palestinian attempted to stab the soldiers, adding that the Israeli reports are just meant to justify killing him with a cause or justification.

Protests occurred after the soldiers and undercover officers invaded the town, before the soldiers shot at least six young men with live rounds in their legs and caused many to suffer the effects of tear gas inhalation and abducting several Palestinians.