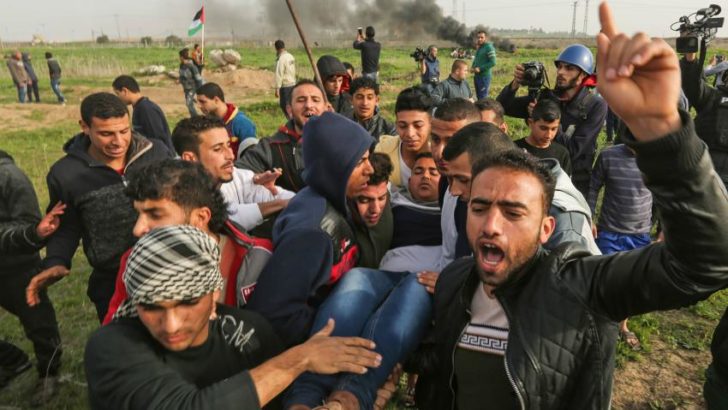 At least 32 Palestinians have died and thousands have been injured in the first 2 weekends of the Great March of Return.

Israel is refusing to let two young Palestinian men—who were seriously wounded by Israeli military gunfire as unarmed protesters during demonstrations in Gaza—travel to the city of Ramallah in the occupied West Bank for urgent medical care.

The two men—Yousef Karnaz, aged 20, and Mohammad Al-‘Ajouri, aged 17, both from Gaza—were wounded when Israeli troops fired on them during the 30 March 2018 Land Day protests.

Both young men, currently hospitalized at Shifa Hospital in Gaza are in critical condition and in immediate danger of losing their legs as a result of their gunshot wounds.

Since Shifa hospital does not have the required medical tools to save their legs, it referred both men to Al Istishari Arab Hospital in Ramallah on 1 April 2018 and a request to exit Gaza and transfer to Ramallah was submitted to the Israeli military’s Coordinator of Government Activities in the Territories (COGAT) that same day.

However, COGAT did not respond and Adalah and Al Mezan sent an urgent letter on 4 April requesting authorization for their immediate passage from Gaza to Ramallah. On 5 April, Adalah was informed that COGAT refused the patients’ requests.

Adalah Attorney Sawsan Zaher wrote in the Supreme Court petition that “there is no substantive justification for rejecting the request of the two petitioners, who are both confined to the ICU in critical condition. The rejection of their request is an expression of indifference to the amputation of their legs.”

Adalah and Al Mezan stressed that because Israel controls the Gaza border crossings, it is responsible for allowing wounded patients to leave Gaza for transfer to the Ramallah hospital.

Hospitals in Gaza are struggling to deal with upwards of 1,990 wounded by Israeli snipers, live ammunition, tear gas from drones, among other kinds of excessive force. Doctors report they are running out of medicine and supplies to treat patients.

The letter was written in response to three cases of seriously wounded Gazans seeking medical care outside of Gaza who were denied entry by COGAT.

“The Israeli authorities must not use the guise of security to delay the medical transfer of persons who have been incapacitated due to serious injury and who do not pose a security threat. The injured must be given a chance to live. Without appropriate care available in Gaza, due largely to the illegal closure that maintains the movement restrictions on all patients, this is ultimately an issue of the fundamental right to life,” said Issam Younis, Director of Al Mezan. “Incontrovertibly, all of Gaza’s patients hold the basic human right of access to medical care.”

The human rights organizations’ stressed in the letter that, in urgent circumstances, it is not feasible to operate according to Israel’s standard procedures for patients, which would incur a delay ranging from two days to months, and that immediate exit from Gaza must be permitted in order for wounded to receive medical care.

“These humanitarian cases require the immediate entry of wounded without delay and any additional technical bureaucracy delaying their entry is prohibited and constitutes a violation of Israel’s obligations under international human rights law, critically concerning the rights to life and health, and under international humanitarian law. Preventing the entry for medical care of individuals wounded by Israeli military gunfire is a violation of Israel’s obligations as an occupying power – and a violation of both international and Israeli law,” Attorney Zaher wrote in the letter.