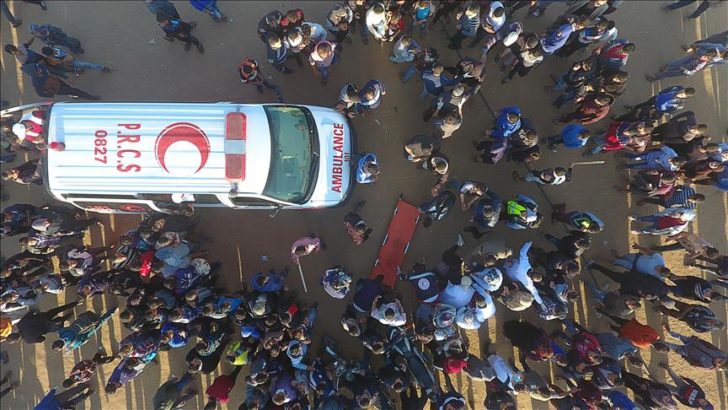 An aerial view of an ambulance arriving for injured demonstrators after Israeli forces’ intervention in the “Great March of Return” at the Israeli border near Khan Yunis, Gaza on March 31, 2018. Dubbed the “Great Return March”, Friday’s rallies in the Gaza Strip also coincide with Land Day, which commemorates the murder of six Palestinians by Israeli forces in 1976. It is also intended to pressure Israel to lift its decade-long blockade of the coastal enclave.

World Health Organization reports on casualties in the second weekend of the Great March of Return, in which 8 Palestinians died and over 1,300 sustained injuries from Israeli forces. WHO is in desperate need of cash donations, medical supplies, and blood.

The second mass demonstration by Palestinians on the Gaza side of the perimeter fence with Israel took place on the 6th April 2018. 8 Palestinians were killed and 1,356 were injured by Israeli forces, according to the Ministry of Health (MoH).

Out of the 1,356 injuries, 754 required immediate transfer to the MoH hospitals or to NGO hospitals (including 81 children, 24 females and 730 males). From the injuries, 35 cases are critically life threatening and 347 may result in temporary or permanent disability. The remaining 947 are unspecified.

A further 602 injuries were managed by primary healthcare centres and medical points by the MoH, Union Health Workers Committee (UHWC) NGO and by the Palestinian Red Crescent Society (PRCS).

Since the mass demonstration began, on the 30th March, according to the MoH, a total of 25 people have been killed and 2,901 people have been injured2 . From this total, an accumulative 1,814 were admitted to hospitals including MoH hospitals and NGO hospitals (Al Awda Hospital and Al Quds Hospital). A further, 1,366 cases were treated at the primary healthcare facilities and medical points by the MoH UHWC and by the Palestinian Red Crescent Society (PRCS).

The casualties occurred during the mass demonstrations by Palestinians on the Gaza site of the perimeter fence with Israel. People from all over the Gaza Strip gathered near the fence, where the Israeli army imposes a ‘No Go Zone’, to mark the Palestinian ‘Land Day’, the second of a series of mass peaceful protests leading up to the 70th anniversary of what Palestinians refer to as the 1948 ‘Nakba’, on 15 May. 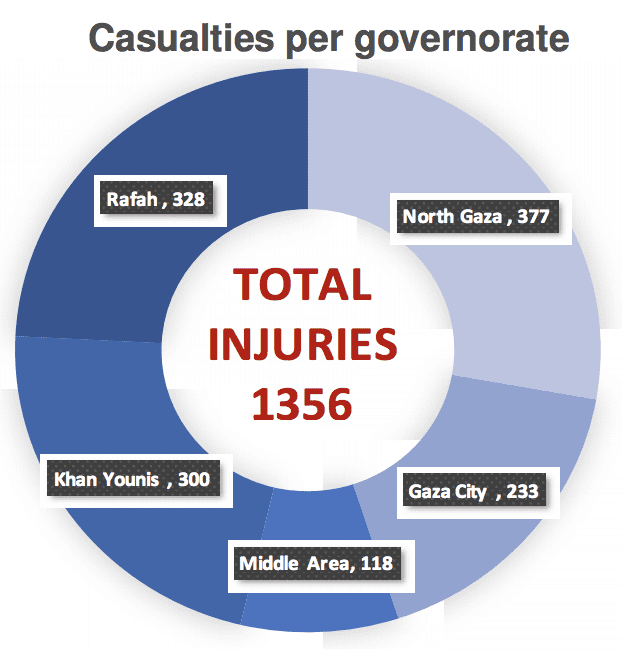 For the second week in a row, mass gatherings took place across Gaza, 500-700 meters away from the perimeter fence, in the following 5 locations;

An-Nahda area in the east of Rafah

Abu Safiya in Jabalia and at the checkpoint in Beit Hanoun, North Gaza

5 medical type 1 camps were set up by the Ministry of Health (MoH), beside the mass gatherings. They were equipped with emergency supplies to stabilize injuries before referring them to nearby hospitals. The medical camps were staffed with up to 10 doctors and 15 nurses; the healthcare staff were also supported by volunteers, and ambulances were on stand-by. Each camp was equipped with first aid medication, and had 3-4 beds; mattresses were also used to support the increasing number of casualties. An additional 5 MoH primary health centers opened to provide support. 

PRCS has also set up 5 advanced medical posts. Each post is an inflatable tent that is equipped with beds, emergency equipment and surgical items, supported by 3 doctors, 4 nurses and 4 paramedics. Furthermore, UHWC opened 3 primary health centers, in the north Gaza, Middle Area and in Rafah. A total of 602 casualties were managed at the medical camps and primary healthcare clinics across the five governorates in Gaza. 

During the mass demonstration on the 6th April, healthcare facilities, including staff faced health attacks and violence:

PRCS provided immediate care to 9 cases of tear gas inhalation in the field and transferred 695 cases to hospitals, including 326 live bullet injuries. 6 bodies were also safely removed from the field by the PRCS. 

UNICEF has released 27 drugs items and 16 medical disposable items out of the prepositioned emergency stock. UNICEF is intending to release the rest of their prepositioned items in the coming days in response to the wider drug shortages facing the MoH. 

WHO is in the process of delivering 10 essential drugs items and 16 medical disposables items to meet the lifesaving needs of casualties over the next few weeks.

59 essential drugs worth $1.1 million USD, 128 medical disposable worth $539,000 USD, and 5 essential laboratory reagents worth approximately $70,000 USD, are urgently required at the MoH hospitals to meet the immediate needs of casualties. 

5 IEHK to meet the basic needs of 50,000 patients in an emergency

10 Emergency trauma Kit A + Kit B to treat 1,000 patients in need of surgical care