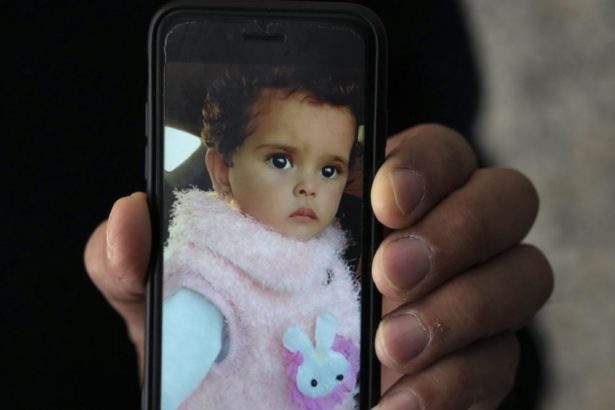 Jalal Al-Masri holds a picture of his daughter, Fatma, who died in December after yet another failure in Israel’s permit system. The picture was taken in Khan Yunis, Gaza Strip, on Tuesday.

The Associated Press shows yet again its affinity for whitewashing Israel’s crimes: this time, downplaying the death of a toddler at the whims of Israel’s harsh permit system.

AP rarely covers Palestinian deaths in detail – it’s disappointing that when they did report on one, they misrepresented the context.

The Associated Press (AP) reported on the tragic death of the Palestinian toddler Fatma al-Masri in an article that failed to capture the true context of the story. Without accurate framing, the article is flawed and misleading.

This is not the first time AP has buried the brutality of Israel’s siege over Gaza (see reading list below) – and won’t be the last – but for Fatma’s sake, IAK wants to set the record straight.

We do not dispute AP’s basic account of Fatma’s story:

Jalal al-Masri and his wife spent eight years and their life savings on fertility treatments in order to have their daughter, Fatma. When she was diagnosed with a congenital heart defect in December, they waited another three months for an Israeli permit to take her for treatment outside the Gaza Strip.

In December, doctors in the town of Khan Younis diagnosed Fatma with an atrial septal defect, a hole in her tiny heart…So they referred her for treatment at a Palestinian-run hospital in Israeli-annexed east Jerusalem that offers pediatric cardiac surgery…

A few days later, al-Masri was informed that the application had been approved. The PA booked an appointment at Makassed Hospital in East Jerusalem on Dec. 28 and agreed to pay for the treatment. The toddler’s grandmother would accompany her.

All they needed was a security permit from Israel.

The permit never came. The 19-month-old died on March 25.

Israel denies permits to Palestinians whom it sees as a security threat. But in the case of the 19-month-old Fatma and her grandmother, it just said the application was under consideration.

He made a third appointment, for Feb. 14. Still no permit.

He made a fourth, for March 6.

This time, he was told Israel needed 14 more days to process the application, so he postponed the appointment to March 27.

The PA’s financial coverage expired, so he reapplied.

The Israelis said they needed a new medical report because the one from December had expired.

“I spent the past three months running back and forth,” he said. “I told everyone I saw: Do the impossible, just get her out. Take her alone, without an escort, and drop her off at the hospital.”

He made a sixth appointment, for April 5.

On Friday, March 25, Fatma woke up early. She played with her father and kissed her newborn baby brother. She wanted chicken wings for lunch, so her father went out to get some.

Anything for his little girl.

While he was out, his brother called and said Fatma seemed tired. When he got home, his relatives were waiting outside for the ambulance. At the hospital, she was pronounced dead upon arrival.

“This is an intentional killing. My daughter was the victim of blockade and closure,” he said. “What did she do to deserve this? She had all the papers.”

COGAT, the Israeli military body that oversees the permit system, did not respond to multiple requests for comment.

Editorializing on behalf of Israel

The problem is that AP’s context and commentary within the article are often problematic.

For example, it followed the following factual statement…

Al-Mezan, a Gaza-based rights group that has helped the al-Masris and other families, says at least 71 Palestinians, including 25 women and nine children, have died since 2011 after their applications were denied or delayed.

with an editorial remark that seemed to excuse Israel from responsibility in Fatma’s and the other 70 Palestinians’ deaths:

That doesn’t necessarily mean that Israel’s decisions were responsible for the deaths — even the best hospitals can’t save everyone. But the families of the sick faced the added stress of negotiating a complex bureaucracy — and the uncertainty over whether things might have turned out differently.

A mix of facts, half-truths, and fallacies

Even AP’s headline for the article was deceptive: “In Gaza, an application languishes, and a toddler dies.” But Fatma’s story is ultimately the story of, not one application and one toddler, but thousands of Palestinians in Gaza.

The rest of the article is a hodgepodge of accurate and inaccurate information. For example, it acknowledges the fact that

Of the more than 15,000 patient permit applications from Gaza in 2021, 37% were delayed or denied, according to figures from the World Health Organization.

but goes on to assert that

Israel grants permits for what it defines as life-saving treatment to Palestinians from the Gaza Strip, which has been under a crippling Israeli-Egyptian blockade since the Islamic militant group Hamas seized power there in 2007…

The wording implies that the permit system and blockade are the fault of Hamas, and that Egypt’s role in trapping the people of Gaza is equal to that of Israel.

In fact, Hamas was duly elected; its military branch takes a stand against Israel’s oppression – using resistance methods that are rarely lethal – against the army of Israel, one of the most powerful military organizations in the world. The result has been the loss of about 4,000 Gazan lives and 40 Israeli lives in over 20 years.

In the same vein, AP reports,

Gaza’s health care system has been battered by the 15-year blockade and four wars between Israel and Hamas.

This casts Israel and Hamas as equals fighting “wars.” Again, the reality is that Gaza has no conventional armed forces or weaponry – which explains the Palestinian fatalities 100 times higher than those of Israelis.

Additionally, the blockade is Israel’s policy, and Israel alone has the power to end it. Gaza’s health care system is “battered” because of Israel’s choices (which included airstrikes that targeted hospitals and ambulances).

In the following paragraph, the Associated Press selects a historical angle that fits the Israeli narrative, and depicts Palestinians as having unreasonable demands for something supposedly not theirs.

Israel captured Gaza, along with the West Bank and east Jerusalem, in the 1967 Mideast war. The Palestinians want all three territories to form their future state.

The statement conceals the fact that, 19 years before the 1967 war, the entire region was considered Palestine. In 1948, Israel appropriated 78% of the land (information here), and the other 22% in 1967. Two of the “three territories” that Palestinians “want…to form their future state” are illegally occupied by Israel; the third is annexed – an arrangement that most of the world does not recognize.

Yet another example of rhetorical manipulation by the Associated Press:

Israel says the blockade is needed to contain Hamas, which Western countries view as a terrorist group because of its long history of carrying out deadly attacks against Israelis. Critics see the blockade as a form of collective punishment for Gaza’s 2 million Palestinian residents.

This statement establishes Israel’s viewpoint as the norm, and frames those who disagree as “critics” or outliers. In reality, most of the world agrees that Israel’s blockade is unlawful, collective punishment. It also omits the fact that Hamas’ attacks came after Israel’s.

Israel’s blockade in fact has caused a humanitarian disaster that the world has condemned for years.

AP did its due diligence by interviewing a pediatrician, presumably in Gaza, who had examined Fatma. He said she had a hole in her heart:

“If the hole is 4 millimeters, we can treat it in Gaza, but the hole in her heart was large, 20 millimeters, and this requires specialized child open-heart surgery that is unavailable in Gaza,” he said. “That’s why the hospital issued her at least four urgent referrals.”

AP then interviewed an Israeli doctor, one who had not seen Fatma, and added his opinion to the report – what sounded like a get-out-of-jail-free card for Israel:

That might have led the Israeli officers weighing Fatma’s course of treatment to conclude her life was not in danger.

AP’s reporters made these observations – that the disease is often asymptomatic and does not appear until later in life, there was no way of knowing Fatma was gravely ill – perhaps to excuse Israel’s refusal to grant an exit permit.

AP fails to report that U.S. medical experts state that when an ASD is very large or too close to the wall of the heart, surgery may be needed to close the defect. The doctors who treated Fatma were in a position to evaluate her situation, not a doctor who had never seen her.

The denial of permit amounts to an Israeli military unit outside Gaza overriding four urgent referrals for heart surgery on a toddler, made by Gazan doctors who had examined her. Israel would have incurred no expenses if Fatma had been allowed to get treatment.

All that was needed was a stamp.

“When I lost my daughter, I felt there is no more life in Gaza,” al-Masri said, his voice trembling. “The story of my daughter will happen again and again.”

Ten days after his daughter’s death, he received another text message from Israel. The application was still pending.

Associated Press, your article buries a dead child a second time – now under a truckload of hogwash.

PRO-ISRAEL BIAS BY OTHER MAINSTREAM MEDIA: