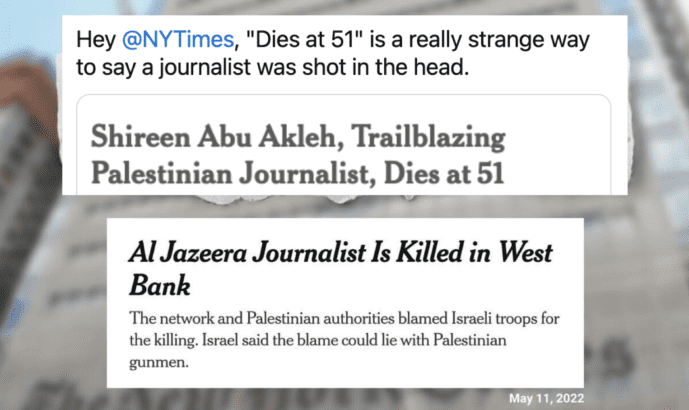 Israel continues its time-honored strategy of manipulating the mainstream U.S. media — this time muddying the coverage of the assassination of journalist Shireen Abu Akleh. Since 2000, 50 Palestinian journalists have been killed, and the world doesn’t know the names of any of them.

The mainstream U.S. media coverage of the killing of the prominent Palestinian-American journalist Shireen Abu Akleh in occupied Palestine could have been worse.

The New York Times and the others could have just ignored the fact that she was shot in the head while reporting, almost certainly by the Israeli military. In a powerful interview, this site’s Yumna Patel explains that since 2000, 50 Palestinian journalists have been killed, and the world doesn’t know the names of any of them. And the Times, to its credit, did add a brief profile of Shireen to its main report, explaining that she was well-known in Palestine and across the Arab world for her years of reporting for the Al-Jazeera network.

Meanwhile, nearly all of the thousands of Palestinians who the Israeli occupation kills in Gaza and the West Bank remain nameless.

But otherwise the mainstream media fell for the Israeli government’s longtime strategy: react immediately to bad news by putting out false or unproven statements, knowing that the Americans will take the bait with a “both-sides say — who knows what’s true?” story.

Israel’s strategy worked again. Its military said immediately that “Palestinian gunmen” had been in the area, and may/did kill Shireen Abu Akleh. Israel promptly also released a misleading video, which it said implicated the Palestinians. The first U.S. media reports, predictably, fell into the trap.

But the Israeli strategy to cover up the truth ran into trouble immediately. First, two eyewitnesses, fellow Palestinian journalists who were alongside Abu Akleh when she was killed, said the Israeli military had clearly targeted them. Then, an investigator from the respected Israeli human rights organization B’Tselem got to the scene, and immediately further undermined the Israeli version.

As Gregg Carlstrom, a Mideast correspondent for the (conservative) Economist magazine, noted on Twitter after reading the B’Tselem report: “Unless Palestinian bullets can turn corners and climb stairs, this [misleading Israeli military video] has nothing to do with her death.”

I’ve been to enough of these things (Israeli military operations in occupied Palestine) to say it’s rather hard to mistake a journalist — unarmed, in a blue vest and civilian clothes — for an armed soldier in olive drab. I’ve seen Shireen kitted out in a vest and helmet. Can’t imagine anyone mistaking her for a soldier.

In fairness, the mainstream press does have to continue reporting the Israeli reaction. But let’s say a similar killing had happened in Ukraine: the American media would have quoted the eyewitnesses, cited the human rights report — and put the Russian dishonesty lower in their reports, in a perfunctory sentence that signaled to the audience that you shouldn’t take this seriously.

Instead, the Times, the Washington Post and National Public Radio all continued to give prominent billing to the Israeli version of the story. All three used a framing that continued to implicitly raise doubts; the first sentences from all of them cited “the Al-Jazeera network” and the “Palestine health ministry” as the sources that charged the Israeli military with responsibility for the killing. The implicit subtext is that ‘naturally, her radical Arab employer and the Palestinian Authority will blame Israel.’

The Times put the actual eyewitnesses all the way down in paragraph 10, after first giving Israel ample room to continue muddying. (The Post, to its credit, cited the witnesses in the third paragraph; NPR in paragraph 4.)

Hey @NYTimes, "Dies at 51" is a really strange way to say a journalist was shot in the head. pic.twitter.com/YoqzHRoDsS

Neither the Times nor the Post included the B’Tselem finding anywhere. The online NPR report did include a tweet from the human rights group. (This site has long pointed out how the New York Times in particular ignores B’Tselem’s reports.)

Today’s New York Times coverage continues to promote the Israeli narrative. Here’s one of the latest updates: “The bullet that killed the journalist Shireen Abu Akleh on Wednesday has become the central point of contention between competing efforts by Israelis and Palestinians to investigate who shot her.” The paper’s brief update gives Israel 4 paragraphs to continue muddying the story — and nowhere follows up with either the eyewitnesses or B’Tselem.

Still, the coverage could have been even worse. A firestorm of criticism on social media is forcing the mainstream to at least cover the story in some detail. One encouraging fact seems to stand out: Shireen Abu Akleh was well known, liked and respected, including by her journalistic colleagues, which will help to keep her memory alive.

MORE ON MAINSTREAM MEDIA AND ISRAEL:

RELATED READING ON ISRAEL’S WHITEWASHING OF ITS CRIMES: