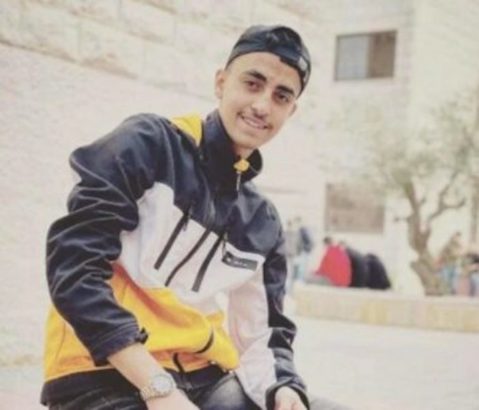 Tha’er Khalil a-Yazouri, shot dead by Israeli forces on May 11, 2022. (His name is also sometimes given as Thayer Khalil Yazouri.) (source)

Israeli forces shot dead a Palestinian teen and shot another teen in the leg a few hours after they killed Palestinian-American journalist Shireen Abu Akleh, 51, and injured another journalist…

So far this year, Israeli occupation forces have killed 45 Palestinians, including 35 civilians: 8 children, 3 women & a female journalist; 17 Israelis have been killed… Two reports below:

Israeli soldiers killed a Palestinian teenage boy on Wednesday and injured another in the al-Biereh city, near Ramallah in the central West Bank.

The soldiers also fired many live rounds, rubber-coated steel bullets, and gas bombs at many schoolchildren after several army jeeps invaded the area.

On Wednesday dawn, Israeli soldiers killed a prominent Palestinian journalist, Al-Jazeera TV correspondent Shireen Abu Akleh, 51, and injured another journalist after targeting them with sniper fire when many journalists gathered to cover an invasion of the Jenin refugee camp in the northern West Bank.

On Wednesday dawn, the soldiers killed a prominent Palestinian journalist, Al-Jazeera TV correspondent Shireen Abu Akleh, 51, and injured another journalist after targeting them with sniper fire

On Wednesday morning, 11 May 2022, Israeli occupation forces (IOF) killed a Palestinian boy during clashes in al-Bireh city in Ramallah, after chasing Palestinian protestors in the area. This crime comes few hours after the murder of Al-Jazeera Media Network’s correspondent Shireen Abu ‘Akleh in cold blood in Jenin, north of the West Bank.

According to investigations conducted by the Palestinian Centre for Human Rights (PCHR), at approximately 11:40, a number of young Palestinian men and boys gathered in al-Taweek Mount area, east of al-Bireh city, and threw stones at a military checkpoint established near “Psagot” settlement, east of the city.

The soldiers chased the stone-throwers and fired live and rubber bullets, sound bombs and teargas canisters at them. As a result, Thaier Khalil Mislet Mohammed al-Yazouri (18), was shot with a live bullet in his chest from the left side and was then taken via an ambulance to Palestine Medical Complex in Ramallah. Upon his arrival to the emergency department, medical crews pronounced him dead.

So far this year, the Israeli occupation forces killed 45 Palestinians, including 35 civilians: 8 children, 3 women, and a female journalist. The others are active members of armed groups, 3 of them were extrajudicially executed. Moreover, hundreds of others sustained wounds in IOF attacks, including women and children, across the West Bank, including occupied East Jerusalem.

PCHR reiterates its call upon the international community to take immediate action to stop the Israeli occupation’s crimes and reiterates its call upon the High Contracting Parties to the 1949 Fourth Geneva Convention to fulfill their obligations under Article 1; to respect and ensure respect for the Convention in all circumstances and their obligations under Article 146 to prosecute persons alleged to commit grave breaches of the Fourth Geneva Convention; noting that these violations are considered war crimes in accordance with Article 147 of the Convention and in accordance with the Additional Protocol I of the Convention to guarantee the right of protection for Palestinian civilians in the occupied territory.