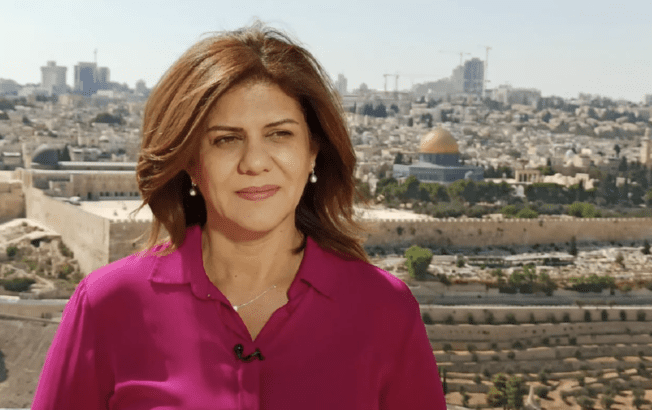 Palestinian journalist Shatha Hanaysha, who was with Palestinian-American journalist Abu Akleh when they came under fire in Jenin, describes the incident and the aftermath:

‘…It was an Israeli sniper that shot at us. We were not caught up in crossfire with Palestinian fighters like the Israeli army claimed…

‘…The funeral procession finally arrived at the small monastery in the city, and the church bells began ringing for Shireen, who is from a Christian family from Bethlehem. Around Shireen’s corpse, we all stood as Muslims and Christians, listening to the priest’s prayer in silence.

‘When I looked around I saw multiple cameras filming. Behind each one was a Palestinian journalist sobbing, knowing that Shireen will never be on the other end of those lenses again…’

By Shatha Hanaysha, as told to Shatha Hammad and Huthifa Fayyad, reposted from Middle East Eye

Before I went to bed last night, I was glued to my phone monitoring the news of the Israeli army ramping up forces near the Jalame checkpoint outside of Jenin, a Palestinian city in the occupied West Bank.

I knew this meant a possible raid on the refugee camp, as has been the case in recent months. I left my phone in general mode so any alerts would come through, and decided to get a few hours of sleep to be ready in the morning.

And just before six am, I received the call I knew was coming.

“There’s a raid in the camp, do you want to cover it?” my colleague Mujahed al-Saadi asked.

”Of course,” I replied. I got ready and headed to Jenin from my home in Qabatya town, a 10-minute car ride away.

When I arrived near the Return Roundabout, a major monument in the city that leads to the camp, I put on my press helmet and body armour, as did the other journalists with me.

Outside the camp, Jenin was a serene city. It was a normal morning, with people walking and driving to work peacefully.

“There’s nothing to fear,” one passerby who came from the camp told us as we put on our vests. “Barely anything is happening in there, it’s calm.”

Israeli forces had stormed the camp and surrounded the house of Abdallah al-Hosari, who they killed on 1 March, to arrest his brother.

Before we advanced on foot towards the camp to cover the raid and a subsequent gunfire exchange between Israeli troops and Palestinian fighters, we had stopped to wait for Al Jazeera journalists.

A scene of chaos

Here was the journalist whose reports I grew up imitating, from voice tone to hand gestures, and I dreamt of doing what she was always so good at doing. Here she was, going on the same missions as I was.

“Good morning,” Abu Akleh said, as she, myself, two more reporters, and two cameramen got ready.

I felt a strange aura around her at that moment. I can’t find the right word to describe what I felt. She was floating. She was happy.

We made ourselves visible to the soldiers who were stationed hundreds of metres away from us. We remained still for around 10 minutes to make sure they knew we were there as journalists.

Shireen Abu Akela was the journalist whose reports I grew up imitating, from voice tone to hand gestures, and I dreamt of doing what she was always so good at doing

When no warning shots were fired at us, we moved uphill towards the camp.

Out of nowhere, we heard the first gunshot.

I turned around and saw my colleague Ali al-Sammoudi on the floor. A bullet hit him in the back but his wound was not serious and he managed to move away from the fire.

A scene of chaos followed.

My colleague Mujahed jumped over a small fence nearby to stay away from the bullets.

“Come over here,” he told me and Shireen, but we were on the other side of the street and couldn’t risk crossing.

“Al-Sammoudi is hit,” Shireen shouted, standing right behind me, as we both stood with our backs to a wall to take cover.

Right then, another bullet pierced Shireen’s neck, and she fell to the ground right next to me.

I called her name but she didn’t move. When I tried to extend my arm to reach her, another bullet was fired, and I had to stay hiding behind a tree.

That tree saved my life, as it was the only thing obstructing the soldiers’ view of me.

“Stay back, stay back!” my colleagues shouted, as bullets flew every time I tried to check Shireen’s pulse.

Out of nowhere a camp resident managed to get to us with a car from an alleyway out of range from the Israeli soldiers. He quickly pulled me and Shireen’s body in and drove us to the hospital.

‘They aimed to kill’

I am still in shock.

What happened was a deliberate attempt to kill us. Whoever shot at us aimed to kill.

And it was an Israeli sniper that shot at us. We were not caught up in crossfire with Palestinian fighters like the Israeli army claimed.

There was no fighting at the time. The location of the incident was in a relatively open area, away from the camp where Palestinian fighters can’t operate because they would be at a disadvantage there.

It was an Israeli sniper that shot at us. We were not caught up in crossfire with Palestinian fighters like the Israeli army claimed

The type of gunfire is another indication. Palestinian fighters normally use semi-automatic rifles that spray bullets continuously.

These bullets were different. They were sporadic and precise. They were only shot when one of us moved. One bullet at a time.

I did not know this would be how my day unfolded but I had been preparing myself to die for some time.

Jenin has come under intensified Israeli raids in recent months. With each raid I went out to cover, I felt I would be killed.

Israel does not differentiate between the old and the young, men and women, civilian journalists and combatants. Everyone is a target.

‘Our jobs are more important than ever’

In the hospital we were all shocked. Journalists, medics, and Jenin residents.

Like many other reporters, I was torn. Every time I put my phone up to film my arm failed me. I wanted to do my job and document the scene but I also wanted to pay respects to Shireen.

I remembered myself as a child watching her reporting on the TV during the Second Intifada.

I recall when my parents and grandparents would sit around in the living room and say: “Shatha, go on, give us a Shireen-style report.”

When I told her this, and that she was my idol, in our first meeting a few years back, she smiled and joked with me.

She was humble with me, kind, and sweet.

She came to Jenin a few weeks ago after years of not reporting from the city. I went to greet her, not expecting she would recognise me, as she met countless other young journalists in her career.

“How are you Shatha?” she said when she saw me, remembering my name, both to my surprise and joy.

Stories like these are what most of us were probably remembering as her body was carried around Jenin to be commemorated.

We finally arrived at the small monastery in the city and the church bells began ringing for Shireen, who is from a Christian family from Bethlehem.

Around Shireen’s corpse, we all stood as Muslims and Christians, listening to the priest’s prayer in silence.

When I looked around I saw multiple cameras filming. Behind each one was a Palestinian journalist sobbing, knowing that Shireen will never be on the other end of those lenses again.

As Palestinians and journalists, our loss is indescribable. But now more than ever, our jobs are important.

To document the violations of this occupation, for our journalistic values, for the truth, and for Shireen.

Shatha Hanaysha is a journalist based in Jenin in the occupied West Bank. This article is available in French on Middle East Eye French edition.

Among many things, Abu Akleh is known for her reporting on Israel’s ruthless 2002 invasion of Jenin, The following documentary depicts the invasion: