You Are Here: Home → The Execution of Shirin: Yet Another Journalist Gunned Down by Israeli Soldiers

The Execution of Shirin: Yet Another Journalist Gunned Down by Israeli Soldiers 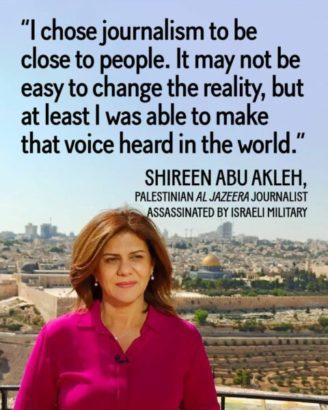 Israel can falsely claim that the bullet that killed Shirin might not have been fired by its army, but there is nothing new here. Israel’s standard procedure is to whitewash its crimes.

Shirin lived for the truth, justice, and the freedom of the press.

After the Israeli occupation soldiers deliberately targeted journalist Shirin Abu Aqleh, we started hearing various condemnations around the world, which is, in fact, the very least that can and should be done. However, the calls for “investigating her death” are possibly the worst response to this injustice, for this crime, for this atrocity.

And of course, I know some might ask, “Why not? Let them investigate and reach a conclusion…” but let’s call things what they really are. The Israeli soldiers saw her, they saw her colleagues, and they chose to open fire, disregarding the press vests, international law, and humanity itself.

Those calling for an investigation are mainly those who want, once again, to acquit Israel and absolve it from its constant and escalating crimes.

The facts are there, the videos are clear, but the Israeli lies, and fabrications are everywhere. Simply put, the soldiers, especially the murderer — that criminal, that Israeli military sharpshooter, knows he made a clear choice to kill her although he could clearly see she is a journalist.

But, why not? Let’s kill her, and the world might get angry, but then they will forget, and others will start fabricating reports criminalizing the victim and praising the killer. Shireen Abu Aqleh was a prominent, well-known journalist, news anchor, educator, and eloquent speaker who exposed Israel and its crimes throughout her career and exposed the true racist nature of this criminal occupation and its apartheid regime.

Israel can falsely claim that the bullet that killed Shirin might not have been fired by its army, but there is nothing new here. Israel’s standard procedure is to whitewash its crimes. Every time the Israeli occupation soldiers have killed a child, a woman, an elder, a journalist, a physically challenged Palestinian… etc., they always have a textbook response.

But let us talk about the new/old Israeli lie this time around, this “claim”, this “possibility” that Shirin may have been killed by a Palestinian. The Israeli army started justifying their crime – as they always do, trying to sow the seeds of uncertainty by making preposterous, false claims that are then repeated by the media. In this case, their ‘damage control’ was a demonstrably false claim that a Palestinian was in the area and opened fire at their soldiers and that he might have been the one who killed her.

The Israeli Information Center for Human Rights in the Occupied Territories (B’Tselem), investigated the location and clearly documented how the Palestinian fighter, in the location he was as shown in the video released by the army itself, could not have possibly been the one that killed Shireen.

The other issue with this lie is that Shirin and another journalist were ducking behind a wall and were in clear line of sight of the Israeli soldiers who chose to ignore their press vests, and chose to ignore humanity (if they had any humanity to start with), and decided to take aim with the sniper scope and fire.

Every journalist who was there, every witness, knows and saw how the area was calm, no protests, no exchanges of fire, nothing, just calm, calm that preceded the storm which started after the soldiers decided to take aim and kill her.

Ali Sammoudi, who was the first to be shot and injured before the army decided to execute Shirin, described the Israeli allegations as total lies.

“There was calm in the area where we stopped, our press vests and equipment and our presence clearly identified us as journalists. There were no Palestinian fighters, not even protesters throwing stones, and then Shirin collapsed and began bleeding heavily when the Israeli army sniper shot her in the head.” Sammoudi added.

It is as simple and as horrific as it sounds, and what might be even worse is that Israel, its politicians, and soldiers, know too well that the worst that will happen will be condemnations, nothing else, no sanctions, no accountability, and above all the ever-present American Veto to protect and shield it from prosecution, and a constant flow of billions of dollars in American aid to Israel and its racist, criminal occupation.

Shirin is not the first journalist to be murdered by Israel, not the first to be injured, and unfortunately, and as much as it saddens me to say, she won’t be the last.

Shirin lived for the truth, justice, and the freedom of the press.

One of her most recent words in a spontaneous interview on the steps of Bab al-Amoud in occupied Jerusalem sums up her humanity: “I am the daughter of Jerusalem, and I love seeing it happy.”

Saed Bannoura is a Palestinian journalist who helped create the International Middle East Media Center (IMEMC.org) in Bethlehem in the occupied West Bank, and currently works as the center’s Editor-in-Chief. Despite having been shot and paralyzed by Israeli special forces in 1991, Saed Bannoura has spent his adult life working for peace and justice through nonviolence.

For a complete list of Palestinians and Israelis killed since 2000,

MORE ON ISRAEL’S TARGETING OF JOURNALISTS: