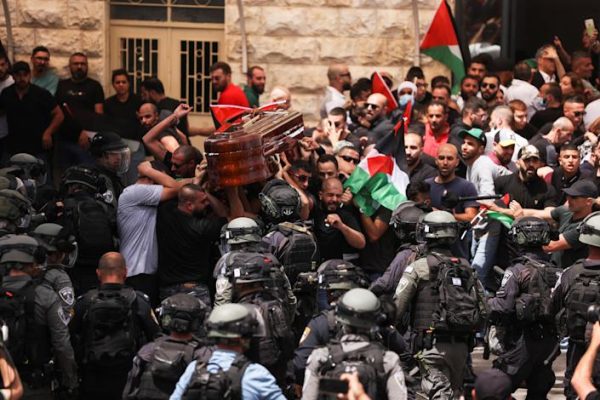 There have been several particularly disturbing stories in the media over the past week even if one chooses to tune out the US Congress’s pending astonishing overwhelming approval of a grant of $39.8 billion to Ukraine to continue the war to “weaken” Russia. Even so-called progressives in the Democratic Party voted for the war.

So now the United States will be at war with Russia through proxy, like it or not, and the consequences could be devastating, particularly if NATO member Poland intervenes directly, as it has been threatening, but few in Washington seem to be awake to that reality. And only Senator Rand Paul, who is asking for an inspector general to supervise the cash flow, is seriously wondering how much of the “aid” will be stolen by President Volodymyr Zelensky and his cronies. Ukraine has long been distinguished as the most corrupt country in Europe.

Another revolting story concerns the murder of a Palestinian Christian journalist Shireen Abu Akleh, who also happens to be an American citizen. She was shot dead by an Israeli sniper who hit her in the neck in the small gap between a protective helmet and vest. She was covering Israeli Army violence directed against protesting Palestinians in the West Bank town of Jenin for al-Jazeera and the vest was labelled “Press” in large letters.

Israel initially sought to blame her death on Palestinian “gunmen” who allegedly were in the area, but that story would not wash when confronted with the eyewitness testimony of others who were on the scene and it was eventually conceded that an Israeli soldier “might have” fired the fatal shot.

Last Friday, preceding Shireen’s funeral at the Cathedral of the Annunciation of the Virgin in occupied East Jerusalem, Israeli police providing “security” were seen kicking and using batons to beat mourners seeking to carry the coffin from the hospital to the church. The police also hurled stun and smoke grenades into the crowd after several plastic water bottles were allegedly thrown in their direction. Abu Akleh’s home was also searched by police and it will no doubt be claimed that she was a “terrorist,” standard Israeli practice for many of those whom they murder.

Whenever an American citizen is killed under questionable circumstances overseas it is the responsibility of the local US Embassy to demand an investigation and explanation of what occurred. To be sure, the ardently Zionist US Ambassador Thomas Nides in Jerusalem has called for an inquiry, but let’s see what happens in this case as the mainstream media conspires to make the story disappear even though a number of Democratic congressmen (and no Republicans) have called for a response. Former Israeli army spokesman Avi Benayahu has already opined that “Let’s assume Shireen Abu Akleh was shot dead by IDF. No need to apologize for that.”

Nevertheless, some form of inquiry acceptable to Israel will no doubt take place, but the Israeli government and the country’s courts have a history of exonerating soldiers and armed settlers when they kill Palestinians. Recently, a Palestinian was sentenced to nine months in prison for slapping an armed settler who was threatening his family while Israeli soldiers and settlers who have killed non-threatening Palestinians, including children, rarely receive any punishment at all.

And being an American citizen makes no difference. History tells us that Israel can kill Americans with impunity judging from the massacre of 34 American sailors on board the USS Liberty in 1967 and the Rachel Corrie murder-by-bulldozer in 2003.

A Turkish-American boy Furkan Dogan who was on an aid ship to Gaza in 2010 was also murdered by Israeli soldiers who boarded the vessel, also killing eight others. No Israeli has been punished for any of the deaths.

This has to stop but the problem is in Washington, not in Jerusalem. Israel kills and kills because it knows it can get away with it due to American enabling of the process. It is an embarrassment that a series of US Ambassadors to Israel have been little more than apologists for the Jewish state.

And we have House Speaker Nancy Pelosi declaring “I have said to people when they ask me if this Capitol crumbled to the ground, the one thing that would remain is our commitment to our aid…and I don’t even call it aid…our cooperation with Israel. That’s fundamental to who we are.”

Meanwhile President Joe Biden has self-declared as a “Zionist” while Senate Majority Leader Chuck Schumer calls himself in Hebrew the “shomer yisroel” or defender of Israel in the Senate.

And then there is House Intelligence Committee head Adam Schiff’s son sporting a Mossad t-shirt. And what about the regular mass “pilgrimages” by groups of Congressmen to Israel during recesses, an exercise in obtaining the approval of whichever unindicted felon is in charge of that rogue country that pretends to pass for a “democracy”?

As much as one would like to see all the traitors in Congress and the White House who give Israel a free pass on its monstrous behavior held accountable, such an outcome is unimaginable because enough of them have been bought or intimidated to such an extent that they remain silent or chant like a chorus in a Greek tragedy that “Israel has a right to defend itself.”

And there is also the Jewish dominated mainstream media: the NY Times report on this latest murder had a headline reading that Shireen Abu Akleh had somehow “Died,” not that she was murdered by the Israelis, to whom the American taxpayer gives $10 million every single day! It is shameful and disgusting! 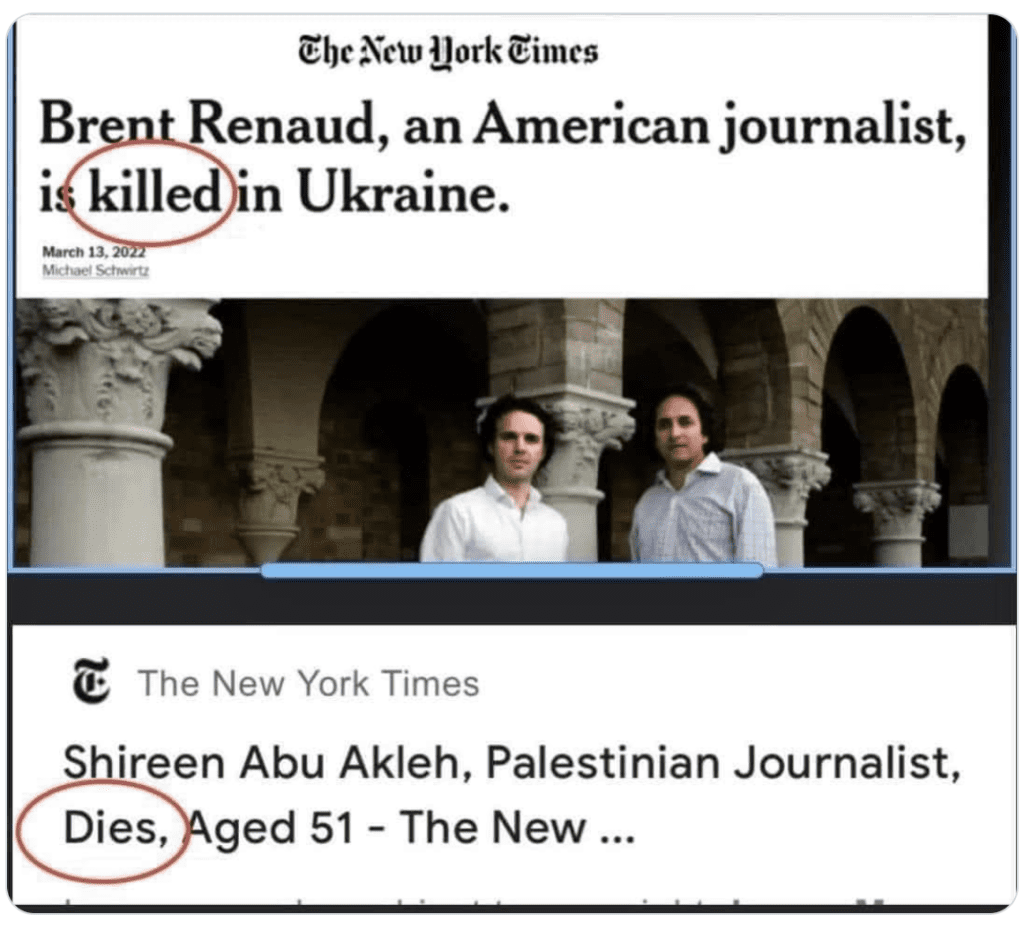 A related tale also concerns Israel and the United States. David Brog is running for Congress from Nevada. Brog is the former executive director of Pastor John Hagee’s Texas-based Christians United For Israel even though he is Jewish. Indeed, he has made Israel the focal point of his campaign based on his contention that “he brings a lifetime of dedication and a depth of knowledge to lead on pro-Israel causes.” He has said “I don’t just want to be a friend of Israel. I want to be a leader on Israel and a champion of Israel… We have to be very quick to reach out and broaden our coalition to all people of goodwill who love Israel and hate antisemitism.”

Brog, who is not from Nevada, has not surprisingly raised considerably more money than other GOP candidates vying for the position and he has also received the backing of former Trump administration Jewish officials, including David Friedman, the ex-US Ambassador to Israel, and Elan Carr, the special envoy to monitor and combat antisemitism. Friedman and Carr co-hosted a virtual fundraiser for Brog two weeks ago.

Brog is a one trick pony and his trick is to keep saying Israel over and over again to bring in the Shekels from the likes of Israel born Miriam Adelson, who inherited her husband’s casino fortune and lives in Las Vegas. It is disconcerting to see a politician running for national office in the United States so he can advance the interests of a foreign country, yet that is what Brog is doing openly. One would hope a lot of Nevada voters will see the issue in the same fashion, but Brog will have big bucks and the pro-Israel media supporting him. In any event, I have to wish the “malocchio” or evil eye on Brog and I hope he loses in his run and loses big. The United States does not need yet another ardent Israel booster in Congress or anywhere else in the public space!

Another tale that is developing surrounds the publication of the latest tell-all book by a survivor of the Donald Trump administration. Former Defense Secretary Mark Esper, who was fired by Trump after the 2020 election, has described a series of catastrophic proposals by the president relating to national security and defense, including using missiles fired from the US to take on Mexican drug cartels. Another idea floated by Trump, if Esper is not lying, was to use soldiers to shoot protesters in Washington in the wake of the George Floyd death in Minneapolis in May 2020. Other former senior Trump officials have also been claiming that Trump often asked whether China had developed a top-secret hurricane gun that could be firing storms at the United States. And John Bolton, in his book, asserts that Trump asked if Finland were part of Russia.

US assassination of top Iranian official made on false pretenses

But to my mind the most interesting revelation made by Esper is the back story, also set in the Middle East, relating to the assassination of Iranian General Qassem Soleimani in January 2020, which illustrates much that is wrong with the national security state that the United States has evolved into.

According to Esper, Trump lied after the assassination was criticized by saying that Soleimani was actively preparing attacks on four American Embassies in the Mideast region. Esper confirms that there was no intelligence to back up that claim, but interestingly goes beyond that to make clear that there was no specific intelligence at all suggesting that such an attack was imminent or even being planned. There were only generic regional security threats that many embassies in the world respond to and make preparations to defend against.

One recalls the back story at the time, with the Iraqi government claiming that Soleimani, widely regarded as the second most powerful official in Iran after the Ayatollah, was in Baghdad to discuss peace arrangements and that the US Embassy had been informed of his planned trip and had raised no objection to it. Instead, the US used the opportunity to launch an armed drone to kill him and nine Iraqi militia members that were accompanying him from the airport. In other words, there was no imminent threat, nor even a plausible threat, and the US went ahead any way and killed a senior Iranian government official.

That is unambiguously a war crime. Will anyone be held accountable? Of course not!

But finally there is also a bit of good news. The White House press secretary who is replacing Jen Psaki is Karine Jean-Pierre. She is a woman, black and lesbian, so clearly she passes the Democratic Party template for such a position but she lacks the mandatory Israel connection. It turns out that she once criticized the American Israel Public Affairs Committee (AIPAC) and even called for it to be boycotted. She is already being attacked by the usual groups and individuals, so let’s see how long she lasts!