You Are Here: Home → Palestinian, 25, dies from wounds from Israeli raid on his city – Nablus

Palestinian, 25, dies from wounds from Israeli raid on his city – Nablus 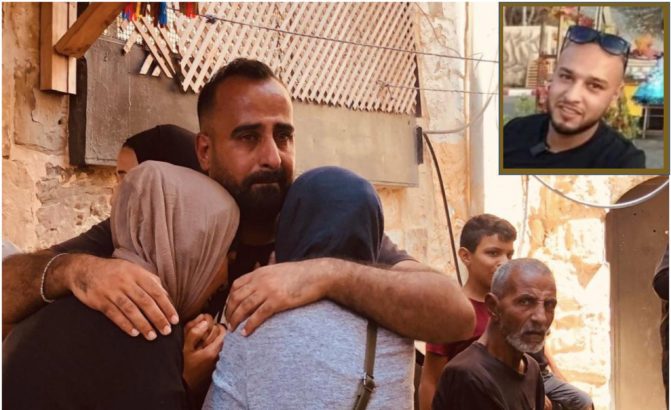 The family of Mohammad Marzouq Arayshy, 25, mourn his death. He is the fourth victim of a massive Israeli raid on Nablus that also injured at least 40 Palestinians. (Twitter/IAK)

Mohammad Arayshy is the 4th Palestinian to die after a massive Israeli raid on the city of Nablus on August 9th. Israeli forces also fired on ambulances as they tried to reach the wounded.

On Tuesday dawn, the Palestinian Health Ministry said a young man, who was shot and seriously injured two weeks earlier in the northern West Bank city of Nablus, had succumbed to his wounds.

The Health Ministry officially identified the young man as Mohammad Marzouq Arayshy, 25, and said the young man remained in critical condition at the Intensive Care Unit

The funeral procession started in front of Rafidia Hospital in Nablus, before the Palestinians marched to Nablus’s Old City to his home, before heading to the Shuhada graveyard.

It is worth mentioning that Mohammad was seriously injured on August 9th, 2022, when the Israeli army initiated a massive offensive into Nablus, killing three Palestinians and wounding at least 40.

It is worth mentioning that the Israeli army fired many live rounds at Palestinian ambulances, prevented many medics from entering the areas it was invading, and later published a propaganda picture claiming the ambulance “was being used to shelter those throwing stones at the soldiers.”

However, a video from the scene shows the medics and a few Palestinians trying to get the seriously wounded young man into the ambulance so that it can speed up to the hospital.

Due to ongoing protests, the medics loaded the seriously wounded Palestinian as fast as possible, and the soldiers were still firing at the protesters.