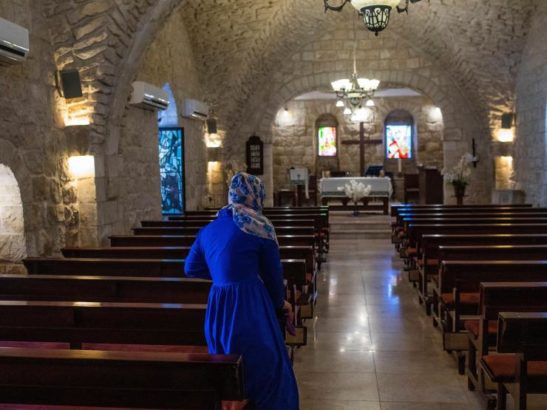 Israeli soldiers raided the church, destroyed church property, and fired weapons – a violation of international law. Israeli forces occupied the entire building — including the sanctuary and rectory — for two hours. The sound of gunshots, stun grenades, and the smashing of doors terrorized church occupants…

THE Episcopal Church in Jerusalem and the Middle East has condemned a “flagrant” raid on the premises of its church in Ramallah, in the occupied West Bank, in the early hours of Thursday morning.

In a statement released by the diocese of Jerusalem later on Thursday, the actions of the Israeli forces involved in the incident are described as “a violation of international law and a terroristic act against the entire community”.

It was revealed later that the focus of the raid was the offices of Palestinian NGOs that rent space in the church compound, including the human-rights organisation Al-Haq. [NOTE: read more about the raids here.] In October last year, Al-Haq was classified as a terrorist organisation by the Israeli government, a move that was criticised by the Office of the United Nations High Commissioner for Human Rights (OHCHR).

A spokesperson for the US State Department has also expressed “concern” about the raid on the NGOs.

The Rector of St Andrew’s, Ramallah, the Revd Fadi Diab, told Agence France-Press: “The soldiers came into the premises around 3 a.m. and we started hearing shots and banging on the doors.”

The diocesan statement details how the door to the church complex was smashed, and the entire building — including the sanctuary and rectory — occupied for two hours. “The sound of gunshots, stun grenades, and the smashing of doors caused terror among the families living inside the compound,” the statement says.

The Guardian reports that the Israeli forces took equipment from the offices and sealed the doors, leaving a notice saying that they had been closed for “security reasons”. But later on Thursday, staff from Al-Haq removed the barriers and vowed to continue its work.

In a statement issued on Thursday, Al-Haq urged the international community to “take concrete measures, such as trade restrictions and arms embargoes, to ensure that Israel is held internationally responsible for its ongoing systematic inhumane acts of apartheid, including the persecution of Palestinian human rights defenders.”

Also on Thursday, the Episcopal Peace Fellowship Palestine/Israel Network condemned the attack as “illegal”. Under international law, Israeli forces require the permission of the Palestinian Authority to operate in Ramallah.

The diocese of Jerusalem asserts: “Places of worship and church compounds should be sanctuaries for communities to feel safe to practice their faith and ministry.” It is calling for a “speedy and impartial investigation into this incident, followed by serious disciplinary action against the offenders”.

MORE ON CHRISTIANITY IN ISRAEL-PALESTINE: