You Are Here: Home → Israeli Soldiers Kill Palestinian, days before his daughter’s wedding 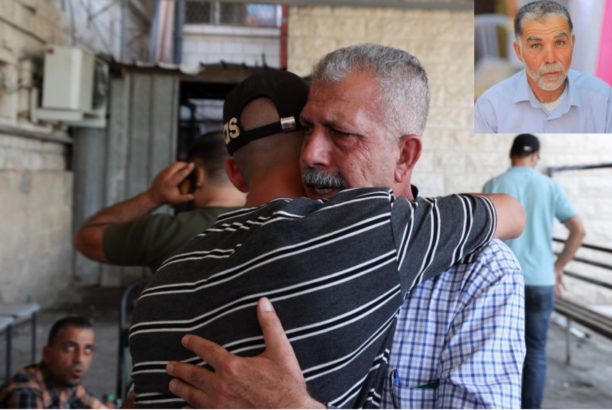 Relatives of 58-year-old Palestinian Salah Sawafta mourn his death outside a hospital morgue. Sawafta was killed during an Israeli army raid in the occupied West Bank town of Tubas on August 19, 2022 (Jaafar Ashtiyeh/AFP)

Salah Sawafta was exiting the local mosque after dawn prayers when he was shot in the head by Israeli soldiers who had invaded the town.

The Palestinian Health Ministry has confirmed the death of Salah Tawfiq Sawafta, 58, from serious wounds he suffered after Israeli soldiers shot him while leaving a local mosque, following dawn prayers in Tubas, in the northeastern West Bank.

Salah was rushed to a local hospital and was admitted to surgery but succumbed to his serious wounds, especially since the soldiers shot him with a live round in the head.

Medical sources said the soldiers invaded Tubas and attacked protesters with live fire, rubber-coated steel bullets, gas bombs, and concussion grenades, shooting Salah in the head while he was leaving a mosque in the city following dawn prayers.

Palestinian medics provided the urgently needed treatment to the injured man before rushing him to a hospital due to the seriousness of his concision.

Local sources said the family was preparing to celebrate his daughter’s wedding scheduled to be held on August 26th.

The soldiers also shot a young man with a live round in the thigh during protests that took place after the army invaded Tammoun town, south of Tubas.

The soldiers stormed and ransacked many homes in Tubas, and in Tammoun town before abducting five Palestinians.

Kamal Bani Odah, the head of the Tubas office of the Palestinian Prisoners Society (PPS), said the soldiers abducted Ma’moun Na’im Abu Odah, Mustafa Bani Odah, in addition to Moath and his brother Ayed Farhan Bani Odah, from Tammoun, and a college student Akaram Hakam al-Kharraz from his home on Tubas.