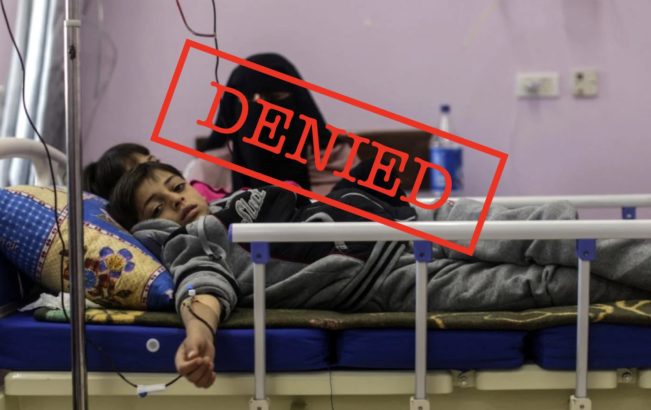 Israeli authorities have rejected a third of medical permit requests for Palestinian minors in the besieged Gaza Strip, almost double the previous year, according to new data.

A report by the Tel Aviv-based Physicians for Human Rights (PHR) found that 32 percent of requests to reach either occupied East Jerusalem, the West Bank or Jordan to receive urgent medical care for children were rejected in 2021, compared with 17 percent in 2020.

Out of 2,578 requests, 812 were either denied passage or have had their applications significantly delayed. 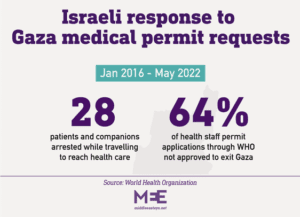 Ghada Majadle, director of the occupied territories department at PHR, said Israel was complicit in “a serious and ongoing crime that is harming patients, especially minors”.

PHR, which relied on figures provided by the Israeli army through freedom of information requests, said there were several reasons for the spike in rejections, including restrictions put in place as a result of the Covid-19 pandemic and the Israeli bombardment of Gaza in May 2021.

In an 11-day bombing campaign, the Israeli army killed 256 Palestinians, including 66 children, and wounded nearly 2,000, including more than 600 children.

The Israeli army turns down permit requests when a minor’s guardian’s application is rejected based on unspecified security reasons or due to purported errors in the submitted documents.

At times, this compels minors, as young as mere months old, to leave without a parent.

In one case, the permit of a seven-month-old’s mother was rejected, forcing the baby’s sick grandmother to substitute for her, Majadle told Middle East Eye.

While receiving treatment in Jerusalem, the grandmother’s health worsened and she had to return to Gaza, leaving the baby alone in the hospital.

PHR then petitioned for the mother to come in her place, and she was granted entry after a two-day wait.

“Separating children from their parents during treatment has physical and psychological effects on the patients,” Majadle said.

According to expert medical opinion, children deprived of their parents’ company during treatment respond to medicine slower and less effectively, she added. 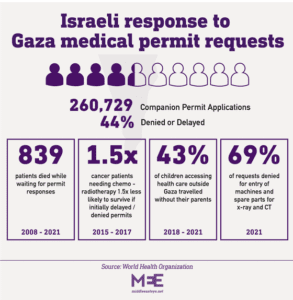 Under a 15-year-old Israeli-led blockade and repeated bombing campaigns, health infrastructure in the Gaza Strip has been debilitated.

According to the United Nations, chemotherapy, radiation therapy and PET/CT scans are unavailable.

This leaves patients of the two million-strong Palestinian population, who are in need of vital and life-saving medication, with no option but to seek treatment abroad.

However, Israeli authorities – which control Gaza’s airspace, seafront, vehicle and pedestrian access – limit their travel through the Beit Hanoun crossing.

Exceptions are made for what they deem “exceptional humanitarian circumstances”.

Between 2008 and 2022, around 30 percent of patient permits were denied or delayed, with applicants receiving no definitive response by the date of their hospital appointment, according to the World Health Organization (WHO).

Of those, 24 percent were cancer patients and 31 percent were children. Between 2018-2021, around 43 percent of children travelled without parents.

WHO also recorded 839 deaths of patients while they were waiting for a permit response from Israel between 2008 and 2021. 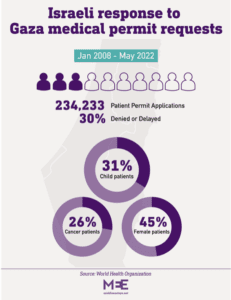 In a report published in May, the UN body called on Israel to “end the arbitrary delay and denial of permits for Palestinian patients in need of essential care and ensure unhindered access for patients and their companions throughout the occupied Palestinian territory”.

Majadle said that as the occupying power over Gaza, Israel bears the full responsibility for ensuring the welfare of Palestinians in the Gaza Strip and the West Bank.

“It’s easier to examine the impact on one segment of society, like children for example,” she said. “But it’s important to highlight that the entire permit regime by the Israeli authorities impacts the health of everyone in Gaza, and to the same extent in the occupied West Bank.”