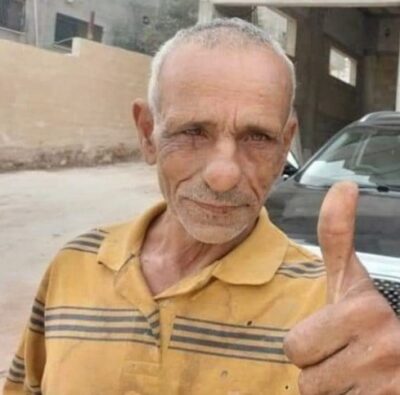 Israeli soldiers shot Hussein Hasan Qawareeq, 60, at the Huwwara military checkpoint south of Nablus after the Israeli army claimed he did not heed their commands to stop. His family said Hussein had a mental illness.

The Palestinian Health Ministry confirmed, on Friday night, the death of a Palestinian man who was shot and seriously injured by Israeli army fire last Tuesday near Nablus, in the northern part of the occupied West Bank.

The Palestinian, Hussein Hasan Qawareeq [also spelled Kawarik], 60, was shot by Israeli soldiers and suffered critical injuries before being rushed to Beilinson Medical Center, where he eventually succumbed to his wounds. Israeli soldiers shot Hussein at the Huwwara military roadblock south of Nablus after the army claimed he did not heed their commands to stop. His family said Hussein had a mental illness.

Hussein was from Awarta village, southeast of the northern West Bank city of Nablus.

Also Friday, the Palestinian Health Ministry confirmed that a Palestinian teenage boy, Amjad Nash’at Abu Alia, 16, was killed by Israeli fire in the al-Mughayyir village, northeast of Ramallah, and injured several others.