You Are Here: Home → Palestinian Teen Killed By Israeli Gunfire Near Ramallah 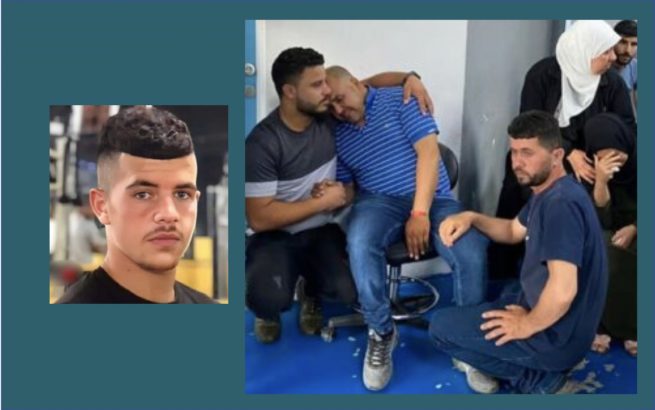 As Palestinians peacefully protested Israeli violations against their persons and property, Israeli soldiers and settlers shot at them; one shot Amjad Abu Alia, age 16, in the chest, killing him.

On Friday, the Palestinian Health Ministry confirmed that a Palestinian teenage boy was killed by Israeli fire in the al-Mughayyir village, northeast of Ramallah, and injured several others.

In a statement, the Health Ministry said Amjad Nash’at Abu Alia, 16 years of age, was shot in the chest before being rushed to a hospital in Ramallah but succumbed to his serious wounds.

It added that the soldiers also shot at least one Palestinian with live fire and another young man with a rubber-coated steel bullet, causing many to suffer the effects of tear gas inhalation.

According to some reports, Abu Alia was shot by a paramilitary colonizer after the nonviolent procession started from the center of the village.

The head of the al-Mughayyir Village Council told Middle East Eye that Amjad was shot by the colonizers and not the soldiers.

Also, the bullet that killed Amjad was aimed at the upper body, which indicates that it was meant to be lethal.

Meanwhile, the Al-Jazeera News Agency quoted a journalist, Hadi Sabarneh, who was at the scene, stating that both Israeli soldiers and paramilitary colonizers arrived at the protest area, including a colonist who had an M-16 rifle.

The Palestinians marched on their lands in the village, protesting the ongoing violations and constant colonialist attempts to annex them illegally before Israeli soldiers and colonizers opened fire at them. The Israeli army also shot at least one other Palestinian with live fire, and one with rubber-coated steel bullets, in addition to causing dozens to suffer the effects of tear gas inhalation.

It is worth mentioning that the illegal colonizers frequently invade the village, especially its lands in Marj ath-Thahab and Ein Samia areas, to build new outposts.

Palestinian Prime Minister, Dr. Mohammad Shtayyeh, denounced the child’s killing and called on the International Community to act and stop the Israeli crimes, especially since they go unpunished.

He added that the Israeli occupation army acts with impunity, especially due to the absence of accountability, which encourages it to commit more crimes and violations.