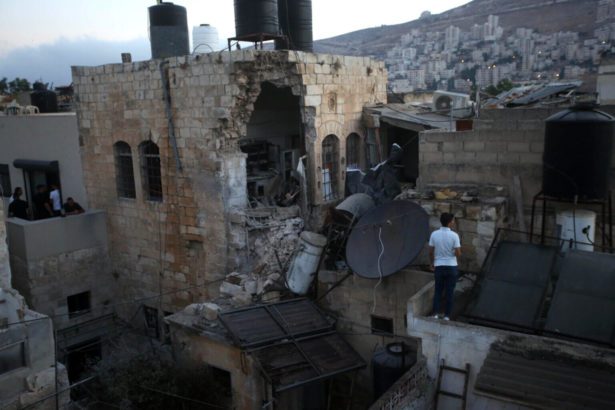 Palestinians inspect the damage to the home of Palestinian Mohammad Al-Azizi that was demolished by Israeli troops, in the West Bank city of Nablus on July 24, 2022. (SHADI JARAR’AH)

The Israeli army raided the the Old City of Nablus, surrounded a home where several Palestinian resistance fighters were located, and exchanged gunfire for several hours before shooting missiles at the house, killing two Palestinians.  Many other Palestinians were injured in the invasion.

Israeli soldiers killed, Sunday dawn, two Palestinians and injured nineteen, including one who suffered a serious gunshot wound to the head, in the Old City of Nablus, in the northern part of the occupied West Bank.

The Palestinian Red Crescent Society (PRCS) has confirmed that the soldiers killed Abboud Sobeh, 29, and Mohammad al-Azizi, 22, in the al-Yasmina neighborhood in Nablus’s Old City.

The PRCS added that the soldiers shot nineteen other Palestinians, including ten who were shot with live fire, among them one who was shot in the head and is in critical condition.

The incidents took place after undercover Israeli soldiers infiltrated Nablus before many armored military vehicles invaded it from several directions, resulting in exchanges of fire between the invading soldiers and Palestinian resistance fighters.

The soldiers surrounded a home where several Palestinian resistance fighters were located and exchanged fire with them for several hours before the army fired a few missiles at the property, killing the two young men, while the five others managed to escape unharmed.

The missiles caused excessive damage to the home and several surrounding homes, buildings, and damaged cars parked on the sides of the street.

The soldiers withdrew from Nablus a few hours after killing the two Palestinians and wounding twelve, leaving massive destruction to homes and buildings.

Nablus Abu Rudeina, the spokesperson of the Palestinian President, denounced the invasion, the killing of the two Palestinians, and the injuring of the twelve and said that Israel is only interested in escalation and more violence.

Abu Rudeina added that the ongoing illegal Israeli occupation and oppression is meant to cause further escalation to avoid any peaceful solution to the ongoing conflict, based on all international legitimacy resolutions.

They added that the medics had to take alternate and longer routes to reach the invaded areas after the army blocked many streets and refused to allow them to cross.

The Quds News Network said the attacks occurred when dozens of soldiers invaded the Old City, especially the al-Yasmina neighborhood, leading to protests before the army fired a barrage of live rounds, rubber-coated steel bullets, and gas bombs.

The Palestinians used loudspeakers of several mosques calling for blood donations at the hospital and asking to help the families in the invaded areas.

The soldiers also invaded and searched several buildings overlooking the Old City and occupied their rooftops to use them as firing posts and monitoring towers.

During the invasion, the soldiers fired an anti-personnel rocket at a home they surrounded in the al-Yasmin neighborhood in the Old City.

The family was in the property and was pleading to be allowed to leave but the soldiers are surrounding their home.

Nablus has been subject to constant Israeli military invasions and violations, in addition to exchanges of fire, after the undercover Israeli soldiers assassinated three young men on February 8th, 2022.

Thousands of Palestinians took part in the funeral for the two men in Nablus on Sunday afternoon. A general strike was held in the city in mourning over their deaths.

Israeli raids on Palestinian cities and villages are a near nightly occurrence in the West Bank, and often result in the injury or killing of Palestinians.

MORE FROM IAK ON ISRAELI RAIDS: