You Are Here: Home → Healthcare access: Israel has Palestinian women giving birth by the side of the road

Healthcare access: Israel has Palestinian women giving birth by the side of the road 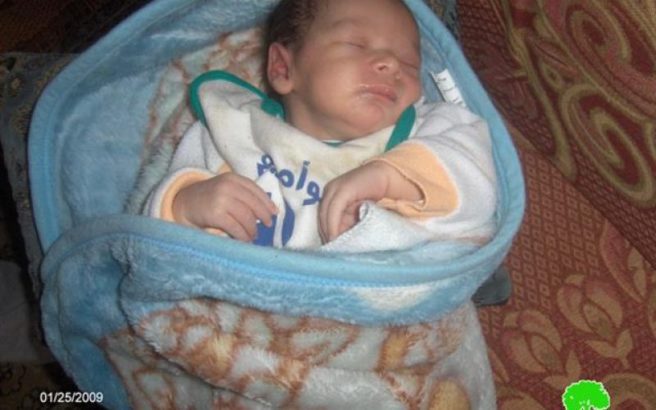 Ramez Al Shweiki, born at Al Za’ayyam checkpoint when an Israeli soldier would not allow his mother through to go to the hospital. (photo)

When Israel closes the gates, Palestinian ambulances, patients, and doctors, are not allowed to cross – and the gates can be closed for days or weeks at a time. Many healthcare workers have been attacked by ideological Israeli settlers on their way to work.

Despite being under full civil and security control by the Palestinian Authority, Israeli forces control the movement and access of people in the 17 villages of Salfit through iron gates. These can be closed at any time, fragmenting and isolating the villages from the rest of the governate, specifically from Salfit City.

“There is a serious problem of accessing healthcare in the governate. We are talking about closures and isolation of villages on a weekly basis from the only hospital, located in the city of Salfit,” said Dr Abdelrahman Abdelhadi, a family medicine doctor and Head of Health Affairs at the Palestinian Ministry of Health’s (MoH) Salfit Directorate. “Ambulances, patients and doctors are not allowed to cross when the iron gates are closed. Imagine the implications of this systematic fragmentation.”

“Sometimes, the gates are kept closed for several days or even weeks. When this happens and there is an emergency in the village, people have to take long journeys to reach the hospital in Nablus, which is 50km away from Salfit,” said Dr Abdelhadi. “Many of our healthcare employees come from surrounding villages and they are often delayed or denied access to the city, which means we have a chronic issue of healthcare workers being blocked or delayed from carrying out their essential work.”

“People in Salfit have started seeking family medicine specialists, as they can see the importance of it,” said Dr Abdelhadi. But Israel’s restrictions on accessing healthcare in the governorate, as well as the area’s lack of primary care facilities, mean patients face major challenges in getting treatment. Salfit Governorate has 18 clinics and government health centres that provide primary care services, but only one hospital for emergency and secondary care.

“If we are unable to lift the Israeli movement restrictions, or at least grant a safe humanitarian passage for the ambulances, doctors, and patients, then we have to make sure that people can access the emergency care they need in their own village,” said Dr Abdelhadi.

Among the many benefits of the family medicine model of healthcare is its ability to improve the management and care of chronic diseases, and the health challenges that ageing populations face. Developing this specialism in the occupied Palestinian territory is also important to ensure every Palestinian has access to high-quality primary care which is equitable, efficient and affordable.

The residency programme is just one strand which forms more than a decade of work to promote family medicine practice in the West Bank, through partnerships between MAP, the MoH, ANNU, the UN agency for Palestinian refugees (UNRWA) and FFMP.

“I am proud to be a family medicine doctor,” said Dr Abdelhadi. “The specialty gave me the knowledge to diagnose many genetic diseases at an early stage and help a lot of people. I can treat chronic conditions, evaluate symptoms, offer preventative care, and let people know when they need to see a specialist.”

Healthcare access also has a serious impact on pregnant women, who must get regular checkups at the Salfit MoH Directorate, which is the only governmental healthcare centre with an ultrasound machine. “I see many pregnant women cancelling their appointments due to access issues, where the Israeli army closed the gate of their village or settlers attacked cars on the roads,” said Reem Abu Higleh, Head of Nurses at Salfit MoH Directorate. “I also know of some cases of pregnant women who had to deliver their babies on the side of the road as they were unable to get to the hospital on time.”

Violence by Israeli settlers is another common threat to Palestinians in Salfit, including healthcare workers. “Many of my colleagues have been attacked by settlers on their way to work,” said Reem. “Most people are too scared to leave their houses after dark, as they are likely to be attacked by settlers.”

Despite MAP’s critical work on developing family medicine practice, only an end to Israel’s systematic discrimination and fragmentation, including excessive force against Palestinian civilians and violations against health workers, can ensure that Palestinians are able to enjoy their equal rights to health and dignity.

Medical Aid for Palestinians is a UK charity founded by British doctors and officials.