You Are Here: Home → The (almost) unbelievable story of an Israeli killer – and the lies that are protecting him 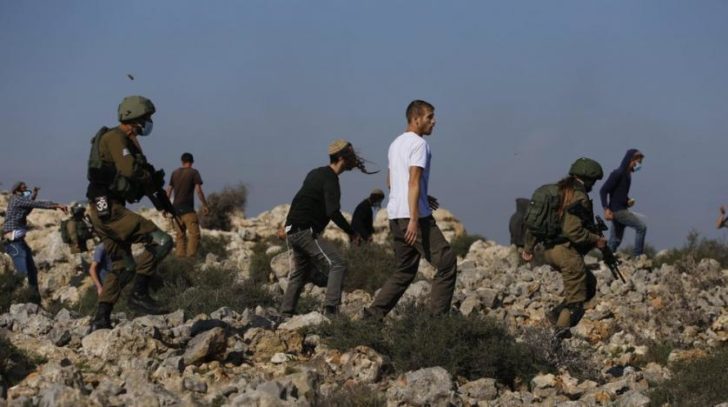 Ideological Israeli settlers, determined to make life miserable for Palestinians, often resort to violence (with Israeli military cover). Ali Harb’s death is one example – and the settler may get away with murder.

After Ali Harb’s gruesome death last month, the chronicle of events that followed was unsurprising to Palestinians living under Israeli occupation, but mind-boggling to most of the rest of the world.

Eyewitnesses to the incident on June 21 describe what began as a fairly routine episode: Israeli settlers (illegal under international law), spurred on by radical ideology, often show up on Palestinian private property to harass or provoke the indigenous Palestinians. Sometimes the settlers come with the intention to pitch a tent – creating an illegal “outpost” which can be the first step in annexing a piece of property.

These incidents sometimes play out with the Palestinians hiding in their homes for safety; at other times, they confront the settlers and tell them to go away. Often, Israeli soldiers accompany the settlers, protect them, and arrest (or shoot at) the Palestinians who refuse to give in.

In this case, a crowd of about 15 settlers – with Israeli soldiers watching – began constructing an outpost on the Harb family land. “When we tried to prevent them,” explained Harb’s cousin Naim, “one of the settlers took a knife and stabbed Ali in the chest.”

Another relative, Zaid, added, “The police and army were just a few meters away from us, but they did not do a thing to the stabber.”

Eyewitnesses maintain that the Palestinians’ actions before the stabbing had been nonviolent.

As Ali Harb lay bleeding on the ground, “the military pointed their weapons at us and fired in the air,” according to another relative, Firas.

Eventually, bystanders were permitted to move Ali. Firas explained, “We carried him for a distance of approximately two kilometers [about 1 ¼ miles)…while he bled, until we got to the ambulance.” Ali was pronounced dead at the hospital.

The official Israeli version of the incident differs, as is often the case.

A spokesperson for the Israeli military claims that a “violent confrontation” between settlers and Palestinians had already taken place when the soldiers arrived – the account emphasized that the confrontation had taken place before they arrived.

Soldiers allegedly noted a wounded Palestinian, and offered to put him in a military ambulance and take him to a hospital so he could get “the necessary medical treatment.” The official narrative asserts that the Palestinians refused.

A few days later, Israeli soldiers arrested members of the Harb family in a 2 am raid that included stun grenades.

One of those arrested described the interrogation: “They concentrated on the fact that we had said the army and police were present when the incident occurred – they tried to tell us they weren’t there when it happened…That was all they asked about.”

He added, “I maintained my testimony that the settler stabbed Ali in front of the soldiers, just as I had said in my declaration to the Israeli police just after the killing happened.”

Israeli intelligence arrested a 44-year-old Israeli settler; hundreds of Israelis, among them far-right members of the parliament, protested the arrest, demanding the killer be set free.

In fact, on Tuesday, July 5th, the settler who killed Ali Harb was released to house arrest.

The Israeli newspaper Ha’aretz reports: “Police are now regarding the case as one of reckless homicide…rather than a more serious charge of murder.” If convicted, the maximum sentence would be 12 years. (Reckless homicide is a form of involuntary manslaughter.)

The settler, who was trespassing on private Palestinian property and being asked to leave, has claimed that the stabbing was in “self-defense,”

Shin Bet investigators do not regard the incident as “deliberate” or “terrorism.”

While all of Israel’s settlements in the Palestinian West Bank are illegal under international law, outposts are not even officially recognized by Israel; nevertheless outposts receive funding and military support from the state.

The violence used to intimidate and ultimately ethnically cleanse the Palestinians from the land has been practiced since the founding of Israel, and even before – and generally goes unacknowledged and unpunished by the state.

The Israeli government has given the settlers a green light to take over any land they can take by force.

In the Salfit region alone [where Ali Harb was killed], there are 24 settlements and settler outposts, and they are among the most violent settlers in the West Bank.

Palestinians in the region have no protection, and they have to come out to protect their lands, risking their safety and lives.

Settlers come out to establish new outposts on Palestinian land because they know that they have the army and the government’s protection, and that’s why they attack Palestinian farmers and villagers as well.

Palestinian leaders stress that killing of Ali Harb is yet another outcome of Israeli impunity – including Israeli settlers – in the international community.

Of the 650,000 Israeli settlers living on Palestinian land in the West Bank and East Jerusalem, not all seek to expand further, as did those who were involved in the killing of Ali Harb. The Israeli government encourages Israelis to settle, and offers incentives to get them to move to the occupied territories. Their presence impacts Palestinian lives in the form of the government appropriating land for the settlements, Jewish-only roads to the settlements, and space for expansion – all carved out of Palestinian property without Palestinian consent.

The ideological settlers go beyond this disruption and squat on additional Palestinian property besides what they already have. Both types of settlers are in breach of international law.